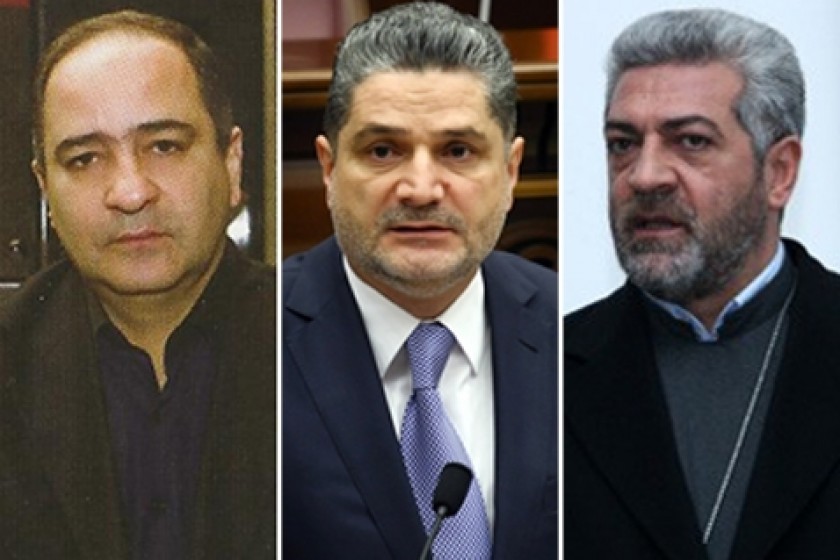 Cyprus Troika: Who 'Stripped' Businessman Paylak Hayrapetyan of His Assets?

The murky dealings of WLISPERA HOLDINGS LIMITED, an offshore company registered in Cyprus, reveals how elements of Armenia’s powerful state, church and business sectors have been able to operate in tandem in the pursuit of their own economic interests.

WLISPERA (WHL) is directly connected to a case involving the seizure of assets belonging to businessman Paylak Hayrapetyan.

From June 25, 2010 to June 15, 2011, Ashot Sukiasyan received periodic loans of $10.7 million from AmeriaBank. As collateral, however, he used companies owned by Paylak Hayrapetyan and the latter’s son.

Receiving the money, however, Sukiasyan failed to abide by the loan agreement conditions and the business plan he had presented. But this didn’t prevent AmeriaBank to continue freely transferring amounts to several bank accounts owned by companies registered in Cyprus.

According to instructions of the Dzoragyugh Production Cooperative, AmeriaBank wired some $9,370,450 of the loan monies transferred to the cooperative’s bank account to the accounts of several offshore companies held at the Hellenic Bank Publik Company of Cyprus. The loan monies were transferred to:

Let us present another interesting fact. A portion of the amounts transferred to the Cyprus offshore accounts, were transferred back during the same time period to the Dzoragyugh Production Cooperative accounts at AmeriaBank.

So who is Ashot Sukiasyan? The press in Armenia has reported about him on various occasions. According to one report, his godfather is Ararat Primate Archbishop Navasard Kjoyan and that it was Sukiasyan who gave an expensive Bentley automobile to the clergyman.

Shares of the Dzoragyugh cooperative are equally owned by Sukiasyan, his wife and daughter. It is well-known that he owes a great deal of money to people not only in Armenia, but also in Africa and Russia.

He and his family have since left Armenia. Our efforts to contact Sukiasyan failed.

The police in Armenia have launched a criminal case regarding the abovementioned loan story, but no one has yet been charged with anything.

Paylak Hayrapetyan was one of those who reported the crime and tells how he got caught up in the mess in which his assets are on the verge of being seized.

“In 2009, when the Armenian government was pushing a plan to develop the diamond and jewellery sector in the country, I invested $3.5 million and launched a business employing 400. I built a factory and a trade school to prepare craftspeople. One day, I received a call from Gagik Kocharyan, then the head of the Trade and Market Regulatory Department at the Ministry of Economics. He invited me to see the minister on an urgent matter regarding sector consultation,” says Hayrapetyan.

Hayrapetyan says that when he arrived at the ministry, the prime minister had already exited the consultation. The two met on the stairway landing. He entered the consultation room and then Economic Minister Nerses Yeritsyan was seated. On one side was Archbishop Kjoyan, and on the other, Ashot Sukiasyan.

At the meeting, the minister told the heads of 23 diamond and jewellery manufacturers that $100 million of the $500 million loan to be given by Russia would be allocated in the form of raw diamonds. Moreover, Russia had agreed that Armenia would repay this amount in the form of cultivated diamonds. The minister presented the demand of the government to the manufacturers at the meeting; namely that they would have to employ 10,000 as part of the loan deal.

“Then the minister gave the floor to Ashot Sukiasyan who said that he owned mines in Sierra Leone in Africa and that he was ready to provide quality raw material 15% cheaper than the Russian offer, Hayrapetyan said. “Everyone was happy about this, Yeritsyan and his friends. They agreed and twenty says later Ashot brought a sample of the material. At this meeting there were some 17-18 businessmen present. They had brought experts with them. It turns out that the diamond material was indeed high quality.”

Sukiasyan, however, noted that he could supply Armenian businessmen with such material for years on end if a $12 million investment was made in his African mines to purchase some necessary equipment. Those present at the meeting, escorted by Trade and Market Regulatory Department at the Ministry head Gagik Kocharyan, then went to ArmSwissBank.

“Since it was such a large-scale government project and I was the eldest of those present, I said that I would be able to immediately place my property as collateral so that the others wouldn’t have to do so individually. The duration wasn’t that long, just three years,” recounts Paylak Hayrapetyan.

Sometime later, Ashot Sukiasyan said that ArmSswissBank had refused to grant the loan, but that with the intercession of the prime minister, Minister Yeritsyan and Archbishop Kjoyan, AmeriaBank had agreed to loan the money.

Sukiasyan placed $33 million worth of property belonging to Paylak Hayrapetyan as collateral with the bank and received a $10.7 million loan.

“The business plan, on which the loan was given, was drafted by AmeriaBank. Sukiasyan paid $6,000 for the plan,” says Hayrapetyan.

The plan was very similar to the government’s plans of 2008 and 2013. It too was a grandiose plan that envisaged turning Armenia into a world center for the polishing and sale of diamonds. Of course, this time, it was the debtor, Dzoraghbyur Ltd., making such a promise according to the business plan. All the while, the bank transferred monies to a production cooperative bearing a similar name never noted in the original business plan.

Thus, the question arises as to why, and upon whose orders, did AmeriaBank conduct such transcations? Why didn’t it monitor the expenditures of the loan, especially since the amounts were given in installments? The bank could have, for example, stopped the seventh instalment given that the debtor hadn’t performed any of its obligations regarding the previous six. Furthermore, the bank “closed its eyes” to the fact that a portion of the loan amounts had been transferred back to an account that Dzoraghbyur Production Cooperative had opened in AmeriaBank.

Surprisingly, despite all this, AmeriaBank took title to all the property seized from Paylak Kayrapetyan.