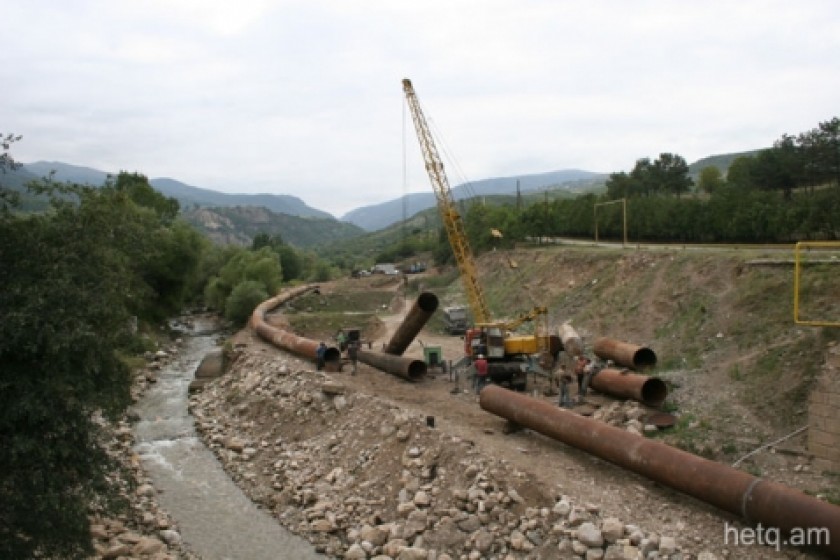 MP Khachatur Kokobelyan, leader of the Free Democrats Party is building a new small hydro plant (SHP) on the Paghdjour River in the village of Getahovit in Armenia’s Tavoush Province. This will be his second SHP on the site.

A third SHP, “Khachaghbyour 2”, is being built by MegaEnergy Ltd. The 100% shareholder of the company is Gegham Aghadjanyan, an Armenian citizen.

In its answer to our inquiry, Armenia’s Ministry of Nature Protection stated that Energy Kok Ltd. had presented a business plan and that on September 1, 2009 the ministry issued a positive Environmental Impact Assessment for the Khachaghbyur SHP. Four years have since past. At the time an operating license hadn’t been issue to MegaEnergy to build the Khachaghbyur-2 SHP on the Paghdjour River. Public hearings that took place were merely for show. (Energy Kok   belongs to the Kokobelyan family, but the MP denied that they were building the SHP – K.A.)

None of the residents gathered in the center of Getahovit could remember any public hearings ever being held for the SHP being built by Kokobelyan. Nevertheless, village mayor Artour Ghazaryan claims that the company possesses all the required documents and that everything was finalized years ago.

We tried to reach Kokobelyan throughput the day on September 9, but failed to talk to him at any length. At first he claimed he was busy and told us to call again after 4pm. We did, but again he claimed he was busy and promised to call us back the next day by noon. He never did. We asked for the name of someone else we could talk to about the SHP. Kokobelyan answered that he was the only one qualified to speak about the matter. We should remind readers that the National Assembly’s “Rules of Procedure” (Article 9.1), specifically prohibits Members of Parliament from engaging in entrepreneurial activities. It appears, however, that Khachatur Kokobelyan is personally managing and overseeing his SHP business. Why else would he tell us that he is the only person qualifies to answer our questions?

According to data in the Ministry of Nature Protections’ assessment, Kokobelyan’s SHP will feature four hydro-turbines with a combined output of 1,292 kilowatts. An environmental discharge of 1,100 liters per second is planned for. In order to minimize and prevent any possible environmental damage, the site will be leveled, fenced off and replanted after the SHP is built. The plan calls for fifteen trees to be planted. The area to get new plantings will cover 450 square meters. The plantings and cosmetic improvements will cost 830,000 AMD. Environmental measures will cost some 7.1 million AMD. By the way, bio-toilets will be installed for workers.

These are numbers that are usually presented in the initial plans. But, more importantly, there are no agencies that monitor how many trees were actually cut down in order to install the 1,430 meters of pipe to carry the river water to the SHP. And who will certify that the company actually planted the fifteen trees promised?

We were not allowed to enter the construction site. Director Loris Yeghoyan said that he was ready to answer our questions at the company’s office on Northern Avenue in Yerevan. He specifically stressed this. Yeghoyan said he couldn’t permit us entry to the construction site because he couldn’t ensure our safety. “We have no safety helmets,” he said. Indeed, none of the workers wore safety helmets, even though the SHP is regarded as a danger zone.

Getahovit lies 700 meters above sea level. According to the environmental impact assessment, the pipes at the new Kokobelyan SHP will start at an elevation of 656 meters and end at the main water input section of the SHP at an elevation of 725 meters.

According to figures of the Public Services Regulatory Commission, the pipes at Kokobelyan’s SHP will start at 731 meters and end up at 850 meters. As for the MegaEnergy SHP, the pipes will begin at 860 meters and wind up at 1,050 meters.

Another company, ATVA Ltd., received water usage rights in 2011 for the Khachaghbyour-3 and Khachaghbyour-4 SHPs on the Paghdjour River. However the Public Services Regulatory Commission has still not granted the company a license. ATVA Ltd. is owned by Arben Ghoulanyan, a former Executive Director of Armenia Water and Sewerage CJSC, and an advisor to the President of the State Water Economy Committee of the Ministry of Territorial Administration of Armenia. This agency told Hetq that the SHPs would be at an elevation of around 1,400 meters.

These figures show that water from the Paghdjour River below will be mainly piped to the SHPs at a higher elevation. If the SHP owners decide not to allow for an environment discharge, as is the case with the vast majority of SHPs now operating in Armenia, Getahovit residents will be deprived of using the river for irrigation and other purposes. There will be little or no water left to flow.

The once struggling residents have given in and no longer want to discuss the SHPs. They regard any further struggle as pointless.

The efforts of Getahovit residents and environmentalists to prevent one of the SHPs under construction proved fruitless. Today, the situation has changed add residents are no longer voicing their opposition. In private conversations with them it is clear that while all are opposed to the SHPs, no one can publicly express it. They are afraid of doing so. Some of the residents say they have been intimidated, while others say they have been “bought off”. Construction continues. One Getahovit woman offered her solution – let them fill the pipe with dirt and be done with.

One magnificent section of Tavoush’s natural landscape is being destroyed. Various government agencies, including the Ministry of Nature Protection, are assisting in the destruction. The Public Services Regulatory Commission and local community leaders are also playing their part in the destruction.

They are directing the waters of the Paghdjour River, slowly but surely, into feeder pipes. This translates into the destruction of the flora and fauna of the river and its surroundings.