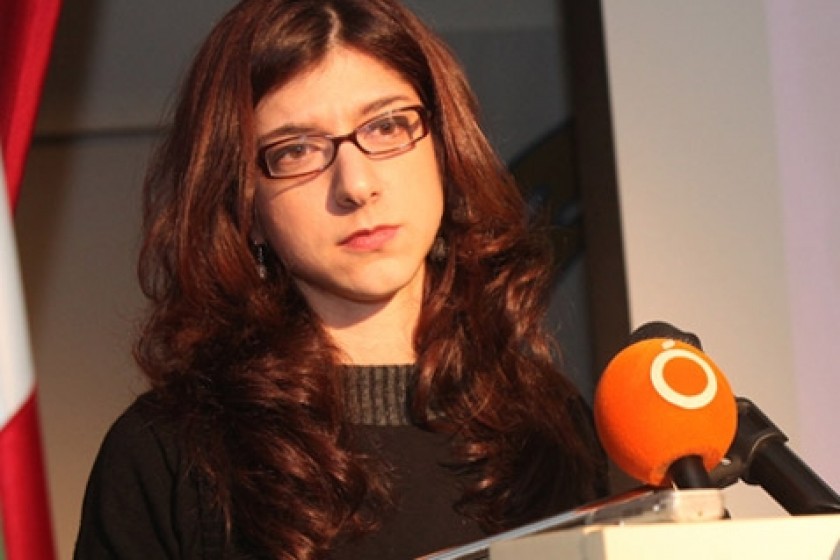 Diaspora Historian Argues Against "One Nation, One Homeland" Myth

In December 2013, Munich-based historian Talin Suciyan was invited to Yerevan by the Ministry of Diaspora Affairs to participate in a conference regarding Diaspora-Armenia relations. Also invited were other intellectuals and political figures with a western Armenian background.

Suciyan, a researcher at the Ludwig Maximilian University of Munich's Institute of Near and Middle Eastern Studies, tells Hetq that the participants had different approaches to the Diaspora – Armenia (hayrenik/homeland) paradigm:

“I was told that we'd be discussing the Diaspora-Armenia relations and probable new ways of relations between the two. Afterwards, during the discussion, it became clear that we had differing understandings regarding a number of concepts. One of these concepts was the idea of the homeland. There was a general conceptualization, that of a nation state, which included the concept of Armenia and of a diaspora belonging to it.

"There exists a diaspora which doesn't belong to Armenia: it was created before the independence of Armenia, mostly from the late 19th century up till 1915 and after. It is the diaspora of western Armenians.

"There is also a diaspora formed after Armenia's independence that's comprised of individuals from Armenia. The approach of official Armenia to somehow link these two realities and call them one diaspora is a figment of the imagination.

"We must recognize these differences and speak about them, putting aside those imaginary, idealized, abstract concepts such as 'One nation, one homeland'. I believe that the most glaring example of these differences was the reaction of diaspora communities regarding Armenia’s signing of the protocols with Turkey. We must learn lessons from what transpired.

"First of all, as I explained, there is no direct affiliation, and second, which is much more important, there is no mechanism of representation, especially for the western diaspora. That is, the diaspora minister is decided by the state or the government; accordingly, this government must be the representative of the people of Armenia in Armenia but not of western Armenians. Third, Armenia, of course, is dear for all Armenians; that is, there are Armenians who have never been to Armenia, but the idea of Armenia is [pure] bliss for them, or they think, there's a country where people speak Armenian.

"There are Armenians who come to Armenia once a year, stay for 15 days, and that is also a connection for them. There are diasporan Armenians who have settled in Armenia. Armenia is important for all, but when we assume that Armenia is also the homeland for all, that's something different, because Armenia can be someone's birthplace; for someone else, it is the birthplace of his forbearers. So, where is home for someone living in Glendale [California] whose ancestors are from Tigranakert?

What is expected of the diaspora ministry?

"It can be said, if the number of diasporan Armenians is three times greater than those living in Armenia, then a diaspora ministry is needed. In my opinion, the work of the diaspora ministry is first and foremost in Armenia. Between Armenia and the diaspora there are very important cultural, political differences and in way of thinking. There have to be spaces created where we can live together with those differences and establish connections with each other."

Is this succeeding? Is there such a process in place?

"There are very good explanations of the cultural differences and the challenges that arise from them in Anahit Mkrtchyan's research. In my opinion, Armenia has to be a country where eastern and western Armenians can talk together and understand each other.  For Armenia to be a country in everyday life that creates spaces for western Armenian intellectuals, so they come to Armenia often, do their research, teach in the universities, establish ties with university students and with the western Armenian world.

"In recent years, there's been an effort in literature for books written in Western Armenian to be printed in Armenia. Armenians migrating from Syria, Lebanon, and Iraq, many came on sad occasions, but today you can hear Western Armenian on the streets of Armenia. The same happened in the 1940s, when there was an immigration to Armenia program, but those people were unable to stay, since the differences between the worlds of eastern and western Armenian were unable to live together in the Soviet reality. If we go back further, we remember the western Armenian intellectuals who survived 1915 and came to Armenia, for example, Zabel Yesayan, who disappeared in 1943 — but very little is spoken about this. Of course we speak of Charents, but not as often about Zabel Yesayan, and when it is spoken about, it is so in a very limited context."

Fine. So what do you propose should be done?

The Ministry of the Diaspora must work to create these spaces, so that Armenia can become a country in which western Armenians have opportunities to live normally. While saying this, I know that people in Armenia are facing serious difficulties and challenges – political, social, and why not, endless migration.

To date, we have no such representative organizations in the diaspora; no such system. I would like to reflect on the words of Mihran Dabagh, Director of the Genocide and Diaspora Studies Institute at Bochum University, regarding the importance of having strong communities. I believe it’s a significant point.

Community life assumes that, for example, you can send your child to an Armenian school. When you are poor, you can seek assistance from the community budget. When you want to attend a concert, say, the community should have the ability to organize such events. In other words, the community is life itself, and people speaking the same language and sharing the same culture have a need for this.