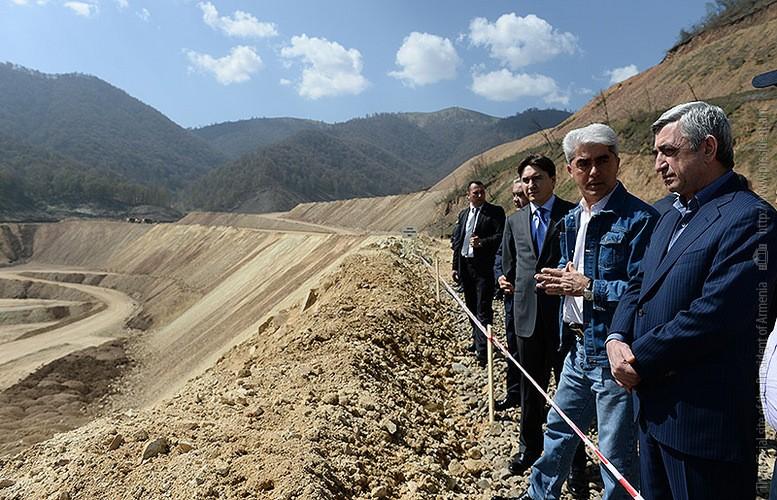 On the surface, it appears that only three individuals will benefit from the extraction of the natural wealth at the Teghout mine in Armenia – three Cypriot citizens and Valeri Mejlumyan.

However, Mejlumyan has devised such a financial labyrinth regarding the operation that we don’t know for certain who he’ll be sharing the profits with.

The struggle of environmental activists to halt the Teghout project has proved futile. Some 140 hectares of forest have already been cut down. In February of 2013, Armenia’s Ministry of Energy and Natural Resources granted Teghout CJSC the right to extract copper and molybdenum. Construction of the processing plant is scheduled to be completed by the summer of this year.

Who is hidden behind the wings at Teghout?

Teghout CJSC was registered in Armenian in 2006. At the time, the Armenian Copper Programme CJSC (ACP; a member of the Vallex Group of companies) was the 100% shareholder of Teghout CJSC. In 2008, Vallex Group signed a UD$283 million loan contract with VTB Bank in order to operate the Teghout mine.

In the 2008 ACP’s consolidated financial report it is noted that 100% of the shares of Teghout CJSC, as a signatory to the loan contract with VTB Bank, had been transferred to Teghout Investments Ltd registered in Cyprus. Today, 50.05% belongs to the Armenian Copper Programme and the remainder to VTB Group, of which VTB Bank is a subsidiary.

According to the Cypriot State Registry, Teghout Investments has two shareholders – Armenian Copper Programme (50.05%) and Nairi Infrastructure Capital Limited (49.95%). The latter is also registered in Cyprus. Nairi Infrastructure, in turn, is owned by A.T.S. Nominees Limited, a company with three Greek shareholders sharing the same last name and registered at the same address. (See diagram below)

Hetq contacted Valeri Mejlumyan in order to understand the link between these Cypriot companies and the Teghout mine and with VTB Bank. Mejlumyan refused to grant us a personal interview.

The press office at Teghout CJSC then informed us that Mejlumyan was out of the country and that we could submit our questions in writing. To our surprise, Mejlumyan showed up two days later at the Teghout mine giving a tour to President Sargsyan (see the first photo).

In response to our query, Vallex Group press spokesman Vahram Avagyan replied: “Vallex Group does not own the remaining shares of Teghout Investments Ltd. and we have no authority to publish any information about that company. Nevertheless, we can state that Nairi Infrastructure Capital Limited was created by VTB Group solely for the purpose of signing a jointly business contract to implement the Teghout mine project. During the execution of the loan contracts, only the “B” shares (non-voting) of Teghout Investments Ltd. take precedence.”

VTB-Armenia wrote to Hetq that: “VTB does not control Teghout CJSC either directly or indirectly. VTB Bank signed a loan contract with Teghout CJSC in 2011 with the support of the Armenian government.”

But Hetq had asked VTB how it founded the company if the bank wasn’t listed as either one of the founders or shareholders? We also asked about the connection between Nairi Infrastructure and VTB Group, the shareholders of the former and why it was founded in Cyprus rather than say, Armenia or Russia.

Teghout CJSC is one of the Vallex Group of companies, whose founders and/or shareholders include companies registered offshore. Valeri Mejlumyan is the linchpin that holds them all together.

In addition to mining, Vallex Group is also engaged in tourism (Vallex Tour), the technology sector (Vallex IT; the Dell representative in Armenia), as well as in the health, trade and cosmetology sectors. The Armenian Copper Programme (ACP) is considered the leader of the group. Until 2011, the ACP had two shareholders – 80.7% belonged to Vallex F.M. Establishment (registered in Lichtenstein) and 19.3% was owned by Valeri Mejlumyan.

Today, Valeri Mejlumyan owns 100% of the shares of ACP.

Vallex F.M. Establishment, however, plays a pivotal role in this network. It links Mejlumyan’s business in Armenia with that in Russia.

Vallex F.M. Establishment has no shareholders, something allowed under Lichtenstein law. Valeri Mejlumyan is the company’s only beneficiary and director. Documents obtained by Hetq show that this company has sister companies in addition to ACP. One of these is a firm called M.K.V. registered in Russia.

The loan received from VTB Bank is collateralized by the 99.9999% share in the charter capital of Vallex P.M. Est. Payment of the principal and interest of the VTB loan is to start as of 2015.

At the above address there is a dental clinic an educational center and a company engaged in cosmetology - VallexM. (It was founded in 2008 and its director is Hrach Poghosyan). LMA Capital owns 51% and Hrach Poghosyan 49%. It was founded by another company - Lernametalurgiai Institute CJSC.

Vallex also operates in Artsakh. Base Metals CJSC operates the Drmbon copper-gold and Kashen copper-molybdenum mines. The Vallex Garden Hotel is now being built in Stepanakert, the capital of Artsakh.

Even though extraction of ore at the Teghout mine has yet to start, Teghout CJSC was listed as the 66th top taxpayer in Armenia paying 107 million AMD. ACP came in 77th with 8 million AMD in paid taxes.

According to the latest published financial statements, Vallex Group revenues amounted to 43.4 million AMD in 2012.