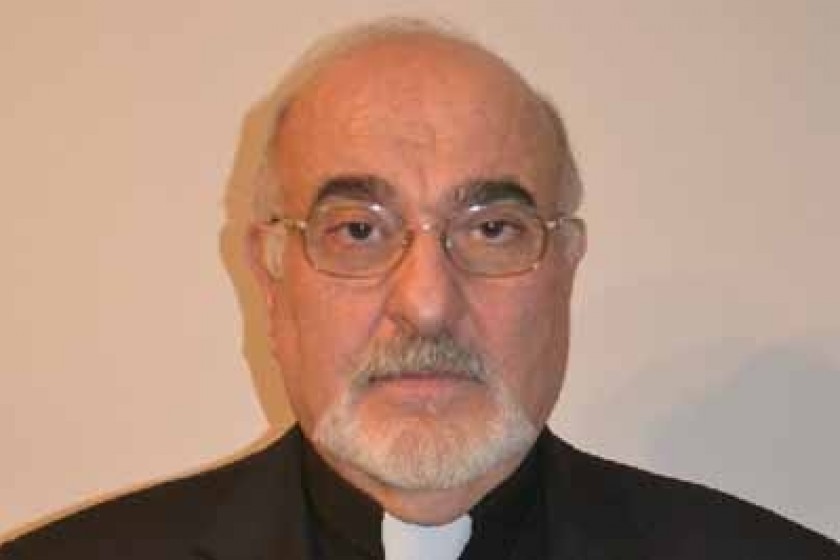 Archbishop Tiran Kyureghyan, the former Primate of the Armenian Apostolic Church Diocese of New Nakhichevan and Russia, is planning to sue Armenia TV for defamation of character.

In an October 23 broadcast covering the consecration of crosses to be placed atop the dome of the newly constructed Armenian Cathedral in Moscow, Armenia TV reported that the former Primate and defrocked clergyman was the reason for the delay in the construction of the edifice..

The TV station alleged that Archbishop Kyureghyan had embezzled some $3 million in donations raised specifically for construction purposes.

Archbishop Kyureghyan had been dismissed as Primate by Catholicos Garegin II in October, 2000 and replaced by his brother Ezras Nersisyan, who at the time had been serving as the priest in the Saint Petersburg parish.

Archbishop Kyureghyan was offered the post of Primate of the Ukraine Diocese of the Armenian Church.

At the time, reports in the Russian and Armenian press stated that Archbishop Kyureghyan refused to hand over the reins of the diocese to Nersisyan and had declared that he would be starting a separate religious body.

Supporters of Kyureghyan staged a number of protest actions but they failed to change the mind of Catholicos Garegin II.

Citing “disobedience and unruly behaviour”, Catholicos Garegin II defrocked Kyureghyan in May of 2001.

By then, construction of the Holy Cross Church had begun and plans were to complete the structure by 2002.

Holy Cross Church was only finished this year.

In October, 2004, the newspaper Kommersant wrote an article about the construction of a religious center for Armenians in the Russian capital and linked the delays to the former Primate, Archbishop Tiran Kyureghyan.

The paper reported that the clergyman had been charged with embezzling $3 million and that he had been defrocked in 2001. It added that the new Primate, Bishop Yezras, had been forced to raise new funds for the church.

Ghazaros Kyureghyan (the lay name of the former Primate) took the Russian newspaper to court. The Moscow Civil Court found in favour of the former clergyman and ordered the paper to publish a retraction. Kommersant did just that on September 16, 2005, saying that the embezzlement allegations were not substantiated.

Forward to today. Armenia TV, at the end of its October 24 news broadcast, issued the same retraction that Kommersant had done in 2005.

The TV station also removed the article in question from its website. However, the news anchor’s introduction with a photo of Kyureghyan and a question regarding the missing $3 million still appear.

Ghazaros Kyureghyan says that it’s a tragedy that after 1.5 years of working on the church, laying the foundation and importing stones from Armenia, that attacks on his person appeared.

Mr. Kyureghyan claims he had nothing at all to do with the donations raised since a special foundation had been set up to manage the money. He says that after Moscow Mayor Yuri Luzhkov was fired in 2010, the foundation was dissolved.

“Those reports say that I was defrocked due to $3 million that went missing. Where did Armenia TV get this information? This is a completely new charge against me. After ten years such distortions are again being directed at me. It means that someone supplied that info to the news anchor,” says Kyureghyan.

The former clergyman says he never acted in a disobedient manner to Catholicos Garegin II.

Kyureghyan says the Catholicos decided to defrock him when the Armenian Church leader was on a pontifical trip to the United States and Canada and had told his brother of the decision by phone.

“Such things just aren’t done to a high ranking member of the church. There’s a definite procedure involved. Defrocking someone is a matter of last resort when there are serious ecclesiastical charges involved,” says Kyureghyan.

The former clergyman describes his defrocking as illegal and says that any charges against him should have been reviewed according to the bylaws of the church and the Supreme Religious Council.

Kyureghyan also claims that Catholicos Garegin II, after returning to Etchmiadzin, rounded up a few members of the Religious Council and wrote up a defrocking order on the spot with the correct date.

On November 3, 2000, Kyureghyan claims that Archbishop Mutafyan sent a letter to Catholicos Garegin II, noting that any charges levelled against a Diocesan Primate of the Church must be “fully corroborated and a tribunal created so that the individual can defend himself”.

After the court case with Kommersant, Moscow tax authorities filed criminal charges against Kyureghyan for land tax evasion on the Moscow church site. The charges were later dropped.

P.S. – In the near future, Hetq will be conducting an interview with former Archbishop Tiran Kyureghyan regarding the construction of Holy Cross Church, the current slander suit against Armenia TV, and his past dealings with Catholicos Garegin II.