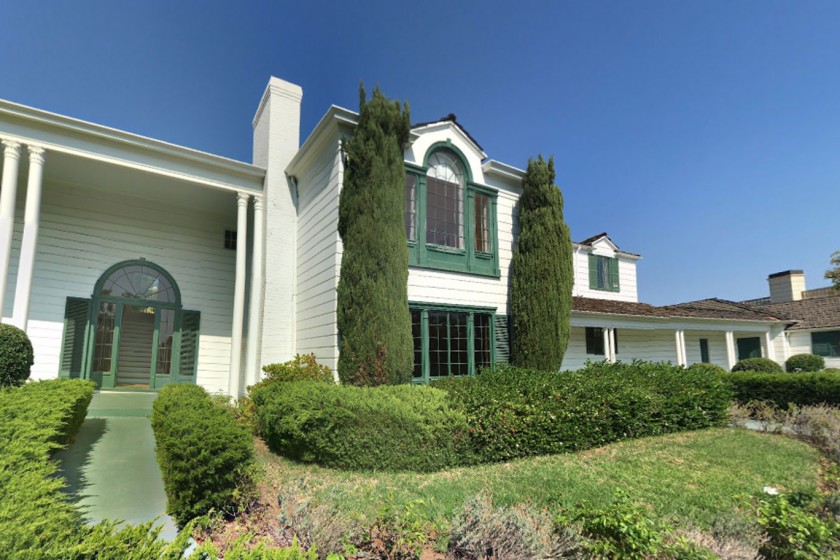 Los Angeles Luxury for $35 Million: House Belonging to Sons of Armenia’s Minister of Finance on the Market

In 2010, Gourgen and Artyom, the two sons of Armenian Minister of Finance Gagik Khachatryan, purchased a sprawling private house in the affluent Los Angeles neighborhood of Westwood.  They paid $11 million for it.

Readers will note that at the time Gagik Khachatryan was serving as the president of Armenia’s State Revenue Committee and controlled the country’s tax and customs services. 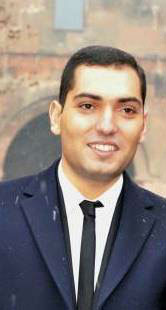 Given his wealth and power, Khachatryan was nicknamed the ‘super minister’. The press in Armenia linked him with a number of companies that, conveniently, were registered under the names of relatives. A partial list includes Ucom, MegaFood, Apeyron, MegaMotors, MegaSport, Chronograph, Galaxy Concern and Chimeg. Gourgen (photo) and Artyom have a stake in some of them. The two young men, along with their wives, are registered as residing at 66 Teryan Street in Yerevan. It’s a high-rise apartment building near the HSBC branch opposite the Yeritasardakan Metro station. Compared with their house at 355 South Mapleton Drive in Los Angeles, 66 Teryan can be described as a hovel.

South Mapleton Drive is considered prime real estate. Average people don’t live in the spacious houses lining the street, with their numerous bedrooms, baths and tennis courts. In 2014, Variety ran a piece, entitled South Mapleton Drive Houses a Bevy of the Rich and Famous, on the glitzy neighborhood.

“For years, legions of Playboy models and wannabe bunnies were housed in dorm-like conditions in the illustrious “Bunny Hutch,” a shabby, ranch-style residence on 1.3 S. Mapleton acres that sold last year for $10 million to the same financier who, back in 2008, shelled out $16 million for the Colonial mansion next door. Hugh Hefner and ex-wife Kimberley Conrad owned another S. Mapleton manse they sold in 2009 for $18 million to one of the sons of billionaire C. Dean Metropoulos, owner of the Pabst Brewing Co.”

In 2013, Hollywood legend Gregory Peck’s window Veronique sold their seven-bedroom mansion to Google zillionaire Eric Schmidt for $22 million.  In January 2014, American TV luminary Ellen DeGeneres bought a stunning, 11,500-square-foot, A. Quincy Jones-designed mansion on 2.25 acres for $39.9 million and lucratively flipped in July to businessman Sean Parker for $55 million. For years, Candy Spelling (widow of TV producer Aaron Spelling) tried for years, and in vain, to sell their 55,000-square-foot house on the street for $150 million. It finally went, in 2011, for a much lower but still sky-high $85 million to Formula One racing heiress Petra Ecclestone Stunt.

Gourgen and Artyom Khachatryan purchased the private house at 355 S. Mapleton Drive for $11 million on August 6, 2010. The Birndorf family, the former owners, had been asking $12.5.

The house was built in 1939 and redesigned ten years later. The house itself measures 563 square meters and the land, 6,637 square meters.

The two-story house has six bedrooms, five baths, an outside pool, tennis court and yard. 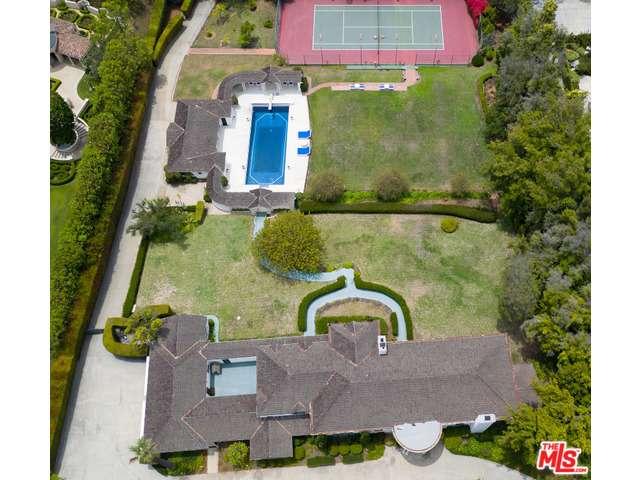 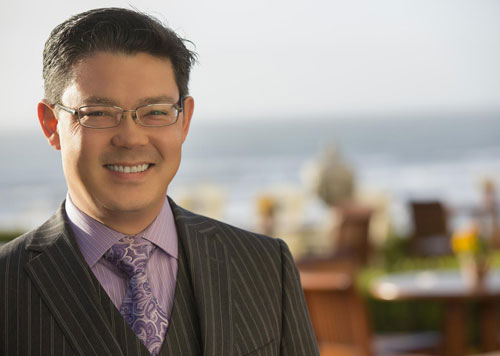 The Khachatryans purchased the mansion through the noted realtor Christophe Choo.

In 2011, Gourgen and Artyom transferred the house over to Abraham Stepanian, who became its trustee. Trusts are often set up to shelter the owners from various taxes and debt obligations.

In fact, the Khachatryans purchased the house in 2010 from the Birndorf Family Trust. A year later, they transferred the house to Stepanian’s Veto Trust. 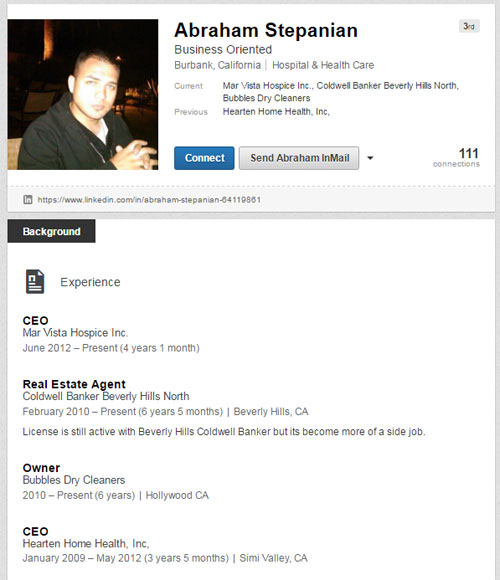 Documents at our disposal do not specify an amount for this transaction, but it is known that it was a quitclaim deed – a legal instrument which is used to transfer interest in real property. (quitclaim deeds are most often used to transfer property between family members, as gifts, placing personal property into a business entity (and vice versa) or in other special or unique circumstances.)

We can infer that the Khachatryans thus handed over the house to Stepanian for him to manage.

Who Is Abraham Stepanian?

It goes without saying that Stepanian is a “trusted” friend of the Khachatryans. He’s into real estate and health services. Interestingly, Stepanian is also an agent for Coldwell Banker, just like Christophe Choo.

According to some documents, Stepanian is registered as living in Burbank (918 N. Evergreen St.), while whitepages.com lists his address as 4771 Forman Avenue in L.A.’s Toluca Lake neighborhood. (The latter is the same address listed for Gourgen Khachatryan in whitepages.com). 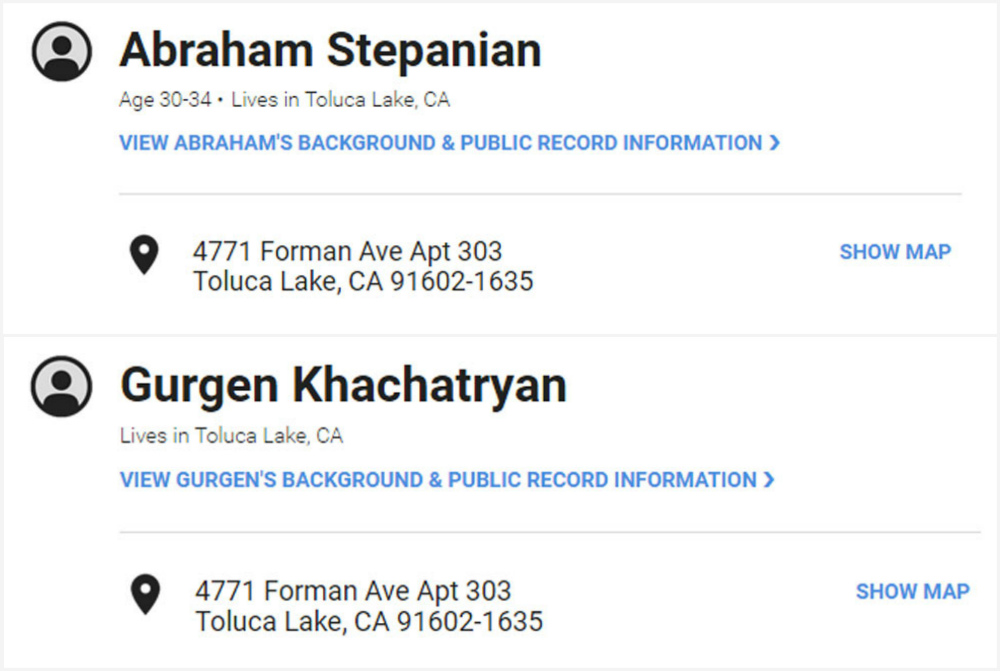 The link between the Khachatryans and Stepanian is also proven by the fact that according to bizstanding.com, Stepanian is the director of a company called Apeyron USA Inc. (The Khachatryan brothers had founded a company with the same name years ago in Los Angeles. It seems to be inactive at the moment but, according to its LinkedIn page, was involved in international trade and development.)

Khachatryans Put House Up for Sale

On June 17, the Khachatryans put their Westwood house on the market for $35 million. Christophe Choo is overseeing the sale.

On August 5, 2011, Gourgen Khachatryan and Veto Trust purchased a private house at 530 S. Mapleton Drive (photo below) for $14.4 million. The sellers were Robert A. Harabedian, Leslie S. Klinger and Mapleton Trust. The real estate agent was none other than Christophe Choo. 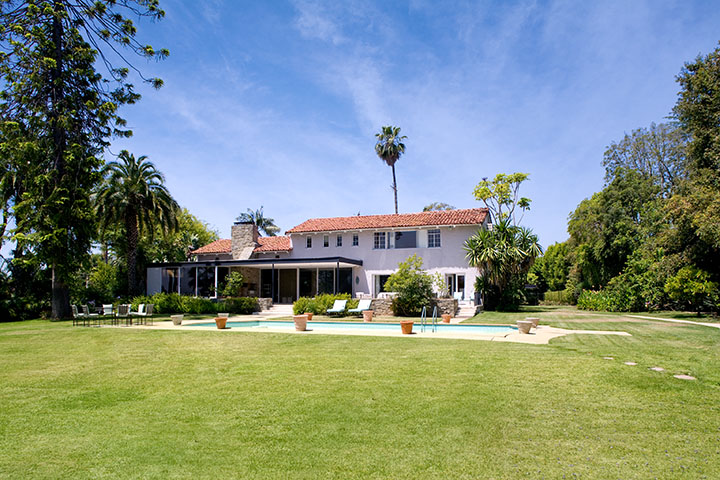 February 2016 satellite images show that the house has been razed to make way for new construction. 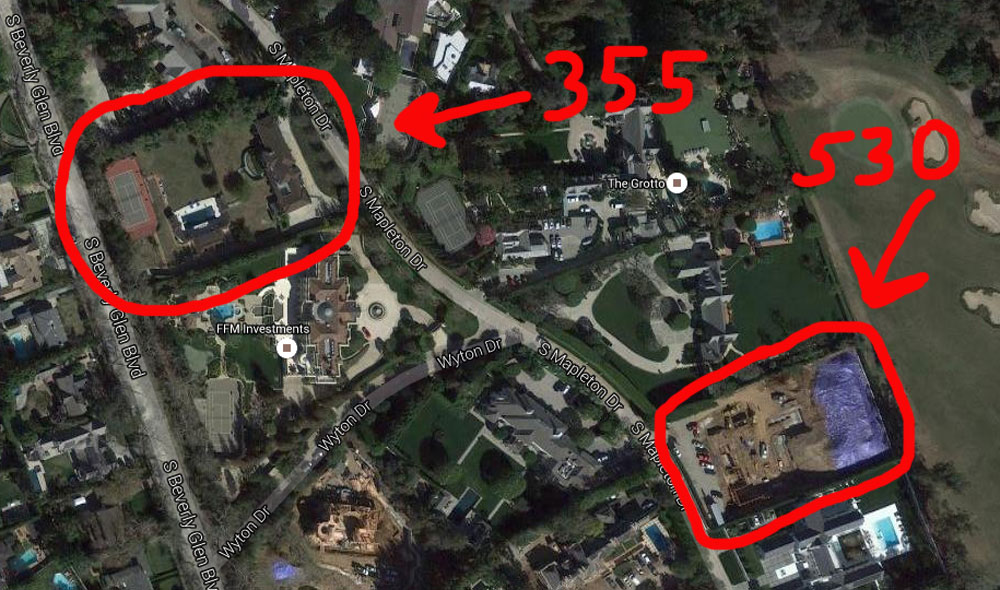 On June 13 of this year, Gourgen Khachatryan transferred the land from Veto trust to WRH Ltd., also registered at Toluca Lake. The documents show that the transaction was in the form of a deed of trust. (In California, this corresponds to a mortgage transaction).

serj 2019-01-25 08:30:16
Once a thief always a thief...The whole government is CORRUPT...
minas 2019-01-25 08:30:16
The question is where did they bring this money? I am not a journalist, but I would assume that there should be some way to clarify how did this money entered the US financial system. You cannot just transfer 10 or 15 million from Armenia to US without leaving any trace. Don't get me wrong, I am not trying to justify them or say they are not corrupt. What I am saying is that maybe Hetq can do a bit more, shedding a bit more light on this story and that will put them in a much more embarrassing situation, with no excuses.
Assdig 2019-01-25 08:30:16
Please do not comment with holly-er than thou observations that do not amount to hell of beans. If you are not doing something about this, just shut the hell up and go on with your business. This kind of people and this kind of a nation deserve this type of charlatans. The problem is not with those who take advantage but those who tolerate and do nothing to change things.
Robert 2019-01-25 08:30:16
I am shocked and disappointed. This is a monumental disgrace. If the evidence is there why not prosecute them? if on the other hand there is no evidence, you cannnot do a thing. But really would government officials be so stupid to allow this sort of thing happen. If the people are aware of these things happening why do they do nothing to bring this to the attention of the diaspora? Whichever way you look at it, it is an absolute disgrace.
Harout 2019-01-25 08:30:16
This should be a wake up call to diaspora Armenians. No more donations to Armenia's corrupt government.
MK 2019-01-25 08:30:16
No more donations to the Armenia Fund,let the regime and its thieves finance the projects by bringing their stolen money from their offshore accounts which amounts to over $10 billion from all the money stolen from the state by these crooks since 2004. http://www.gfintegrity.org/issues/data-by-country/
H. 2019-01-25 08:30:15
Thank you for publishing this, Hetq. If only most of the diaspora knew.
Anna 2019-01-25 08:30:15
It is a lack of decency to buy a 10 million house when you come from a poor country who seek donations from diaspora and aid from developed countries. The consequences of the earthquake in 1988 have not yet been eradicated in Gyumri and there are many armenians who still have no decent place to live. There are also the refugees from Syria who need support, help and solidarity.
Nazareth 2016-07-06 22:44:57
That's it, no more donation from our family to Armenia on thanks giving day, obviously our family needs the $500 more than them, Besides all 4 of us can have nice thanksgiving dinner at a restaurant , by the way the bishop of Artsakh you are invited too.
Igor Bakhtamian 2016-07-04 19:53:53
Dear Hetq, Why don't you investigate the finances of these individuals in Armenia, It is quite obvious that the source of their finances comes from their father who had a cosy job with the ministry of finances of Armenia who has been milking the treasury of Armenia , and the reason no one in the Authorities is complaining , because they all have their fingers in the honey pot .
Gregory 2016-07-02 19:57:51
What can one say if true hunnging them is too good. Oh yes someone said to me that some politicians say their wealth was inheritance !
Donations / Armenia Fund 2016-07-01 16:17:57
Don't donate your hard earned money to corrupt Armenia. Your better off blowing it at a strip club than entrusting it with these thieving blood suckers!!!
Լուսիկ 2016-06-30 15:48:35
Կանտեսեն հոդվածը կամ կբացատրեն,որ զավակները բացառիկ տաղադով օժտված բիզնեսմեններ են:
MK 2016-06-30 15:29:13
We have a bunch of crooks running the country as their fiefdom. Regime is corrupt & criminal from top to bottom. They are a bunch of traitors serving the interest of foreign powers ready to sell any part of Artsakh or Armenia.
man 2016-06-30 08:37:05
Горба́того могиила испра́вит
Սաշիկ 2016-06-30 08:35:04
Անիմաստ բաներ եք գրում: Նախ՝ էս փողերի հետ կապված հարկերը լրիվ մուծված են՝ հոպարին, թվերը թափանցիկ են, թաքցրած բան չկա, իր բաժինն էլ ժամանակին տեղ է հասցվել՝ կանխիկ: Բոլորն էլ գիտեն: Հիմա՝ ակնկալում եք որ քր. գործ հարուցեն, կամ Միհրանիկի նման վարվեն? Մի հատ թույլ տեղ կա՝ ԱՄՆ իշխանությունները ընբռնումով մոտենան... թե չէ ՀՀ-ում լրիվ օրինական է:
Մարտիկ 2016-06-30 03:59:16
Ժոողվրդի ունեցվածքը թալանելով քաղցր կյանք են վայելում աղքատ երկրի հարուստ զոռբաները
Greg 2016-06-30 00:58:15
#poxchka