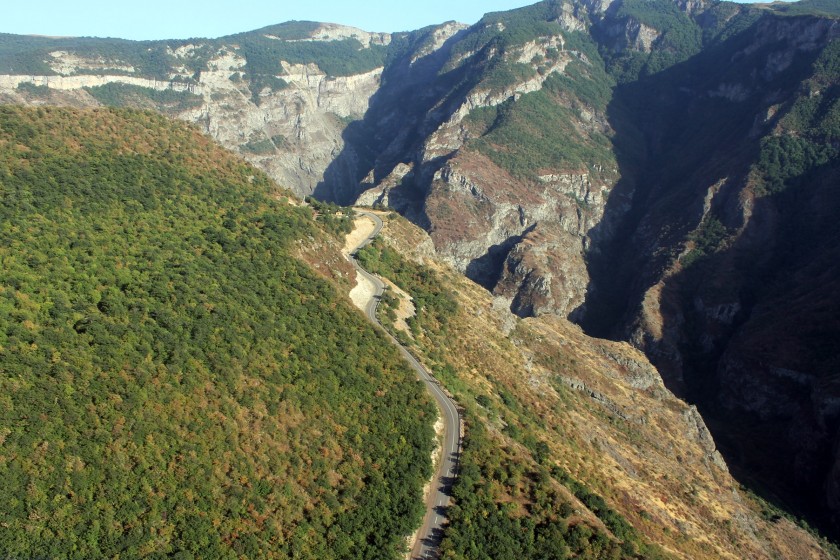 Armenia’s Noravank and Tatev Monasteries: To Be Visited More Than Once

Tourism within the confines of Armenia, whether the vacationer is from overseas or a resident of the country, has for decades revolved around the obligatory visits to churches, monasteries and other monuments of cultural or historical significance.

Of late, the concepts of eco-tourism and cultural tourism have received greater attention.

When it comes to cultural tourism, there is no shortage of religious edifices, many dating to the medieval period and earlier, for tourists to visit. Some lie in ruin, while others are in fairly good shape given their age. Still other have been restored, some successfully and some less so.

The monasteries of Noravank and the Tatev, with their churches, stone crosses and other buildings, are two of the must-see tourist sites in Armenia. It’s their unique architecture, historical significance and natural setting that attracts thousands every year.

The monastic complex of Noravank was built during the 12th-14th centuries, on a spot where older churches once stood. The site is near the former village of Amaghou in the province of Vayots Dzor. It served as the residence of the Orbelian princes, and was the religious center of the historic province of Syunik. 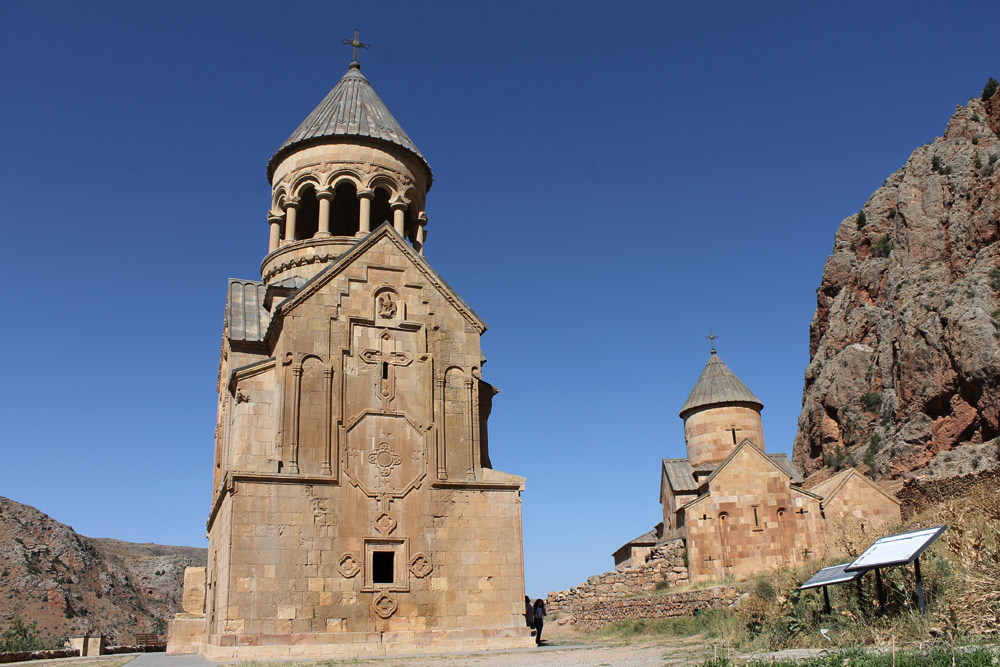 The two main churches at Noravank are Sourb Astvatzatzin (Holy Mother of God - also called Burtelashen in the honor of its financier, Prince Burtel Orbelian) [left of photo], and Sourb Stepanos Nakhavka (St. Stephen the Protomartyr).

The architect and sculptor Momik (1250-1339) is credited with building the two-story Sourb Astvatzatzin, and his tomb, adorned with a stone cross of his design, lies on the south side of the edifice. 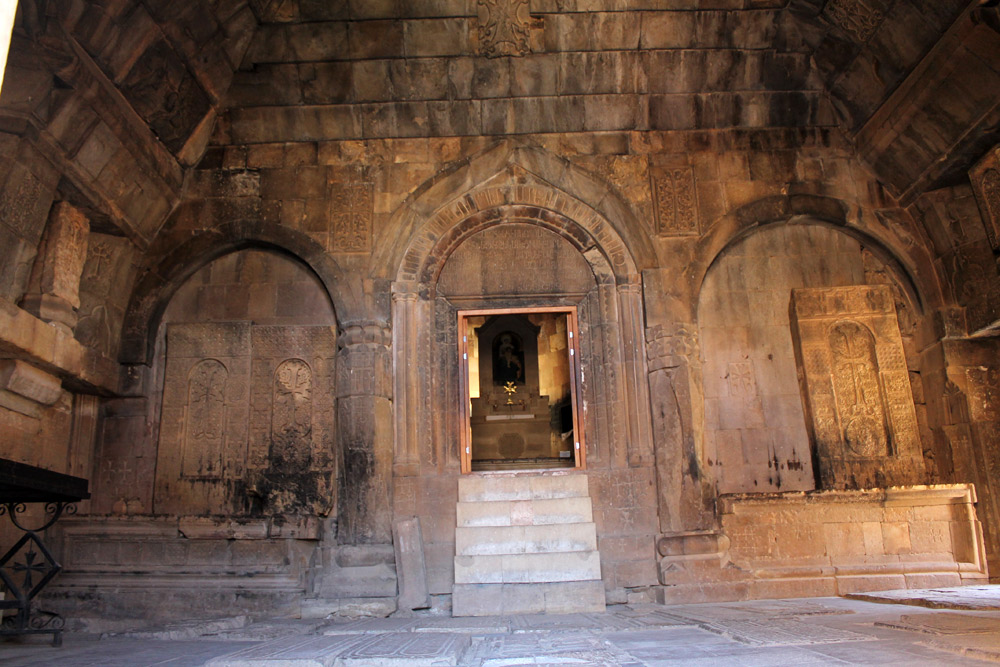 The domed cruciform St. Stepanos Church, the principal building in the complex, was built by Prince Liparit Orbelian (1216-1221) and has been rebuilt at least twice. 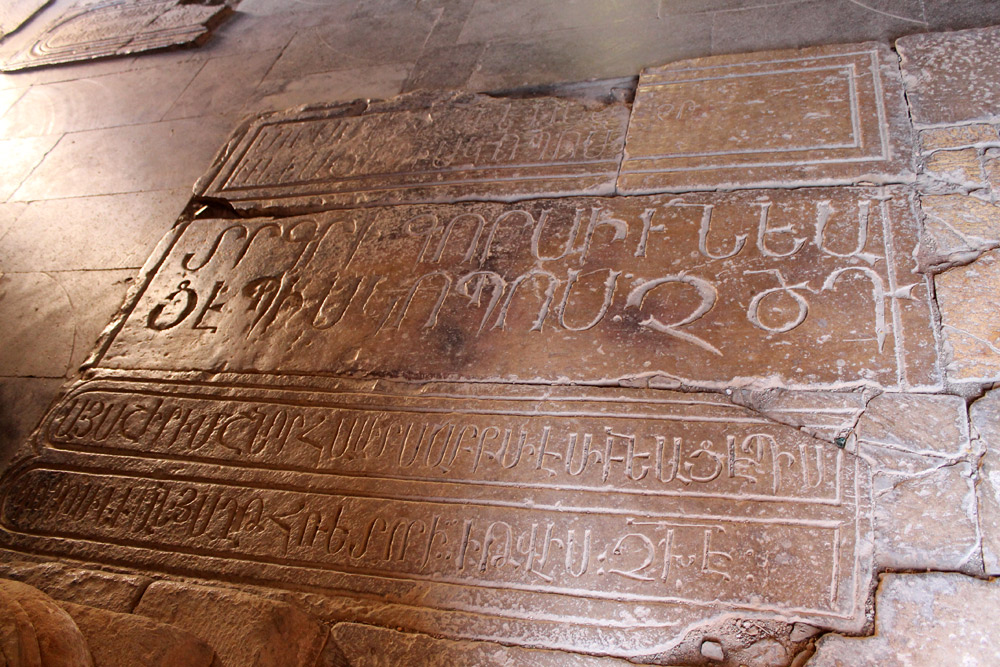 The gavit (forecourt) of St. Stepanos, with tombs of Orbelian family members and the monastery’s abbots.

The forecourt’s ceiling is adorned with various carvings and inscriptions. 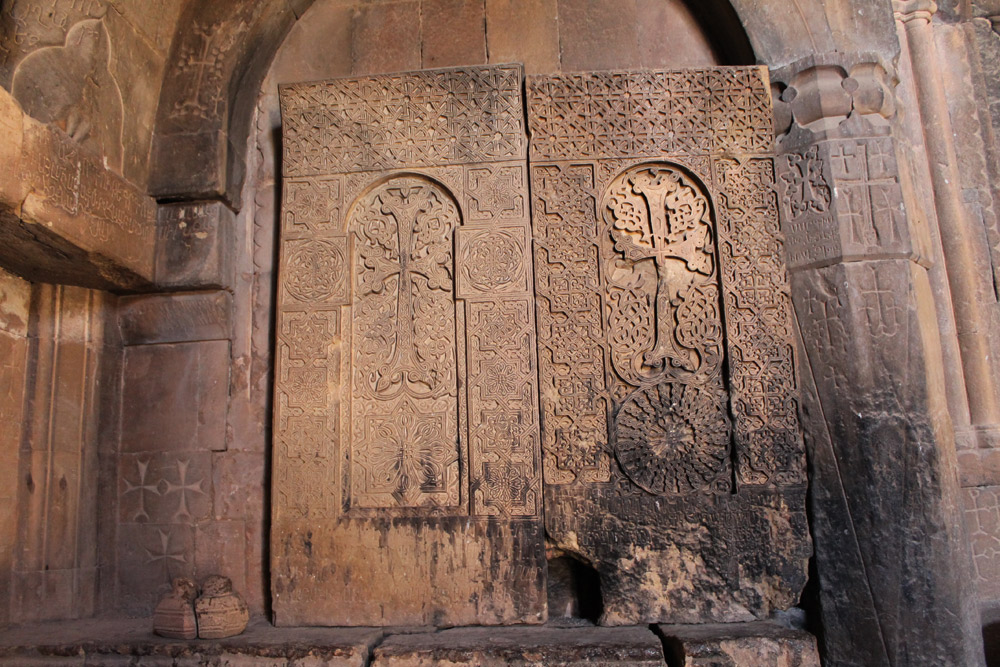 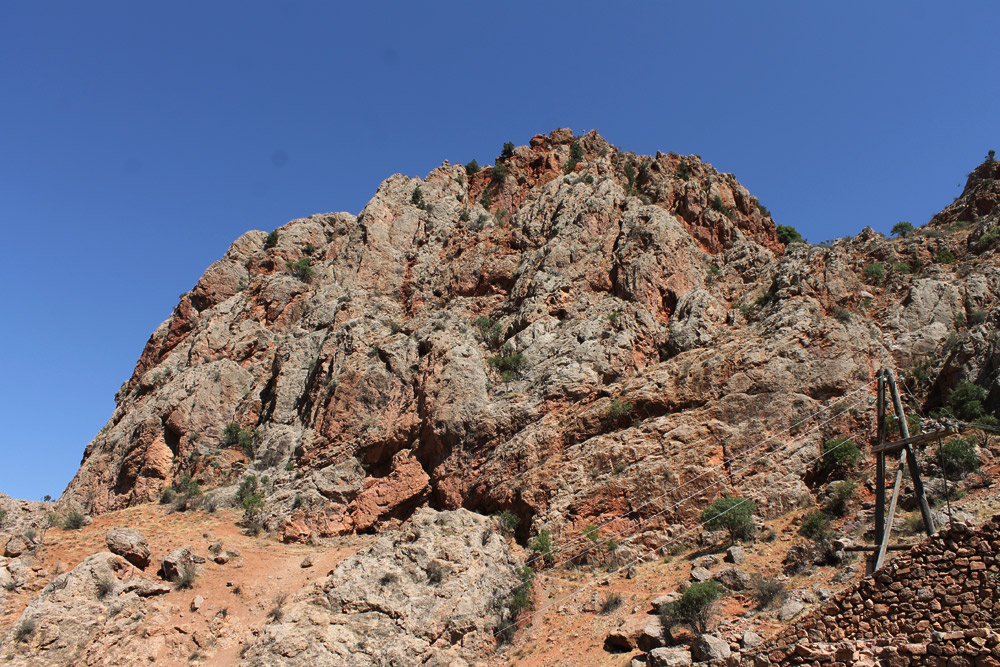 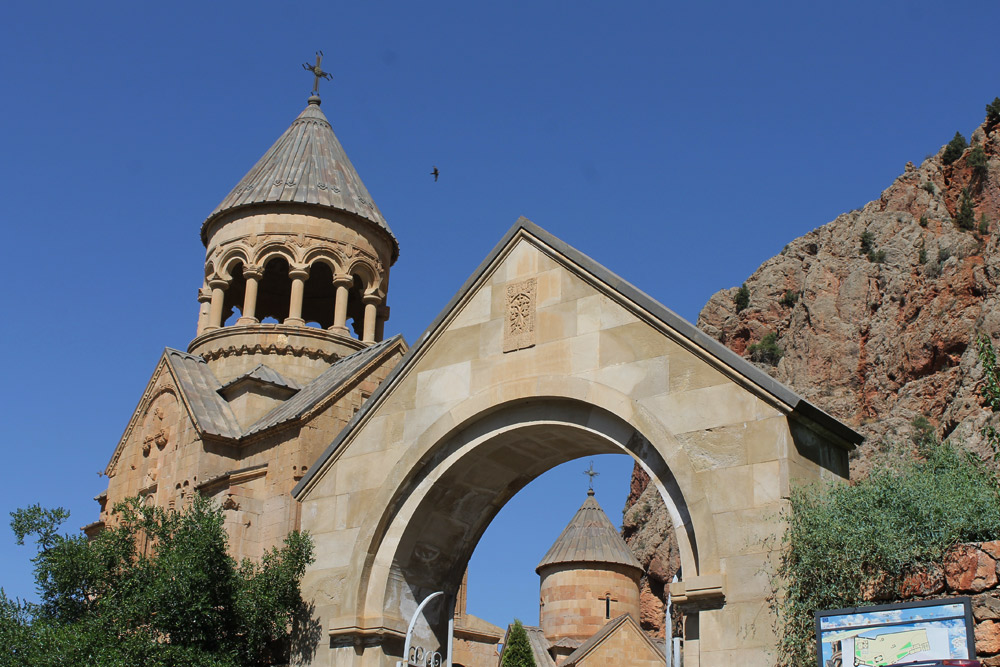 If Noravank can be considered the spiritual jewel of Vayots Dzor, the Tatev Monastery is its equivalent for the country’s current province of Syunik. One of the most scenic routes to reach Tatev, and the eponymous village, is by the aerial tramway that opened in 2010.

It took just ten months to construct the 5.7 km TaTever (Wings of Tatev) cable car. On October 23, 2010, it was officially recognized by Guinness World Records as the world's longest non-stop double track cable car. It takes twelve minutes to ride one of the two operating cars from the village of Halidzor, on one end, to the village of Tatev, on the other. 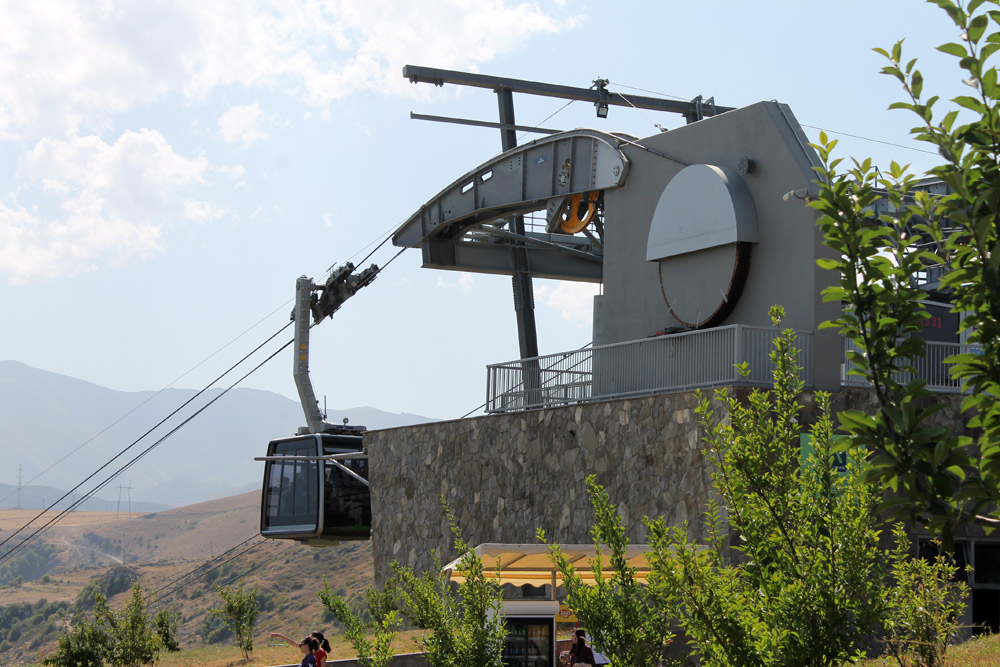 Riding the car, one can almost touch the village of Halidzor below. 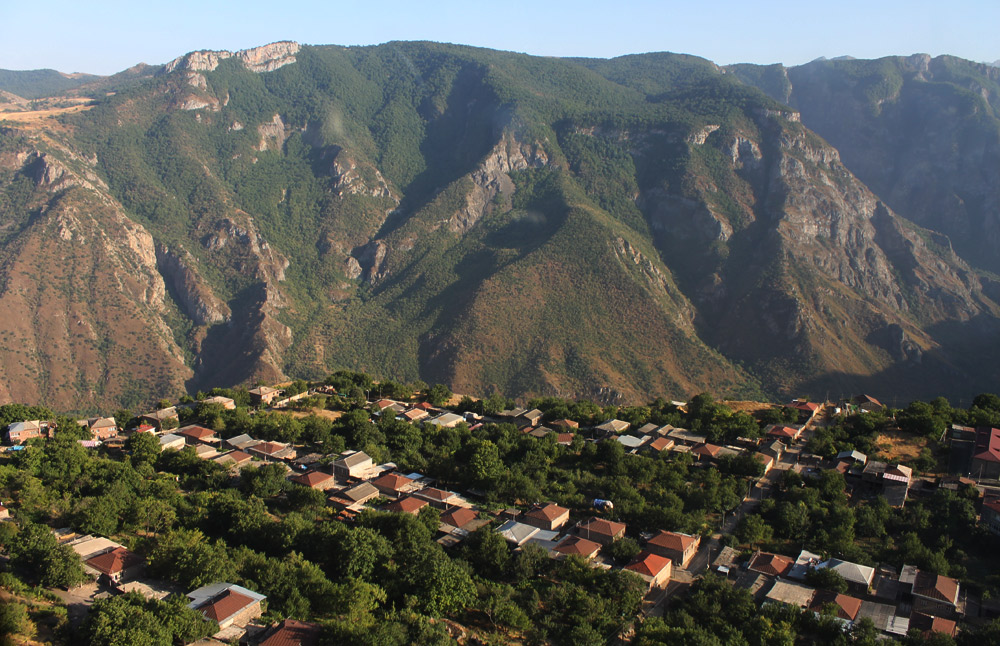 At its highest point over the gorge, the car travels 320 m (1,050 ft.) above ground level. The gorge twists along the Halidzor-Tatev roadway. The famous Devil’s Bridge is located at its lowest point. 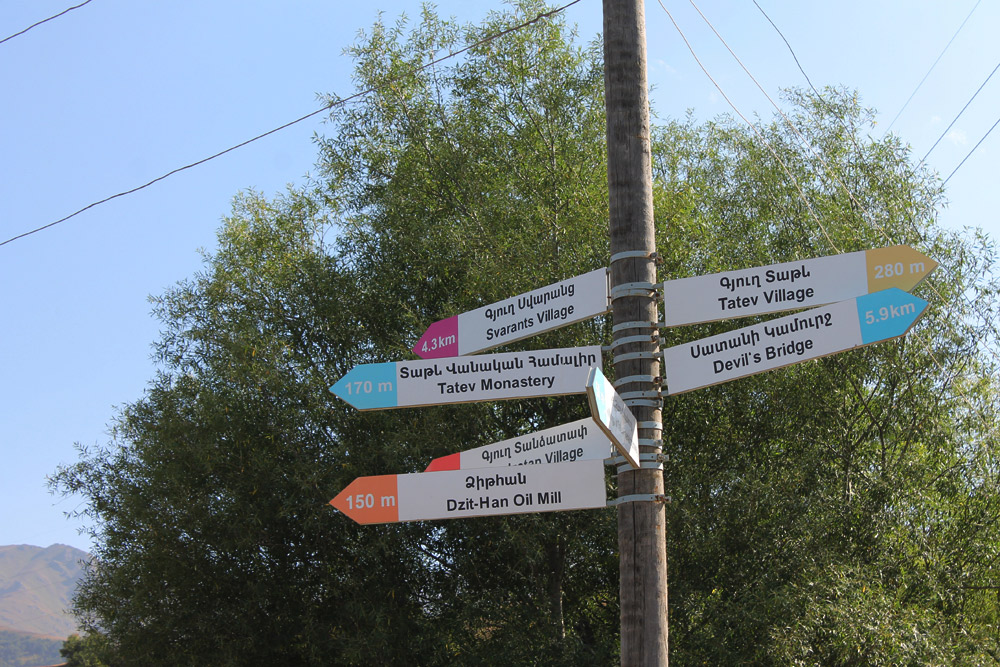 The launching of the cable car boosted local tourism and helped create jobs in the service industry. This smiling cable car guide is a native of Tatev. 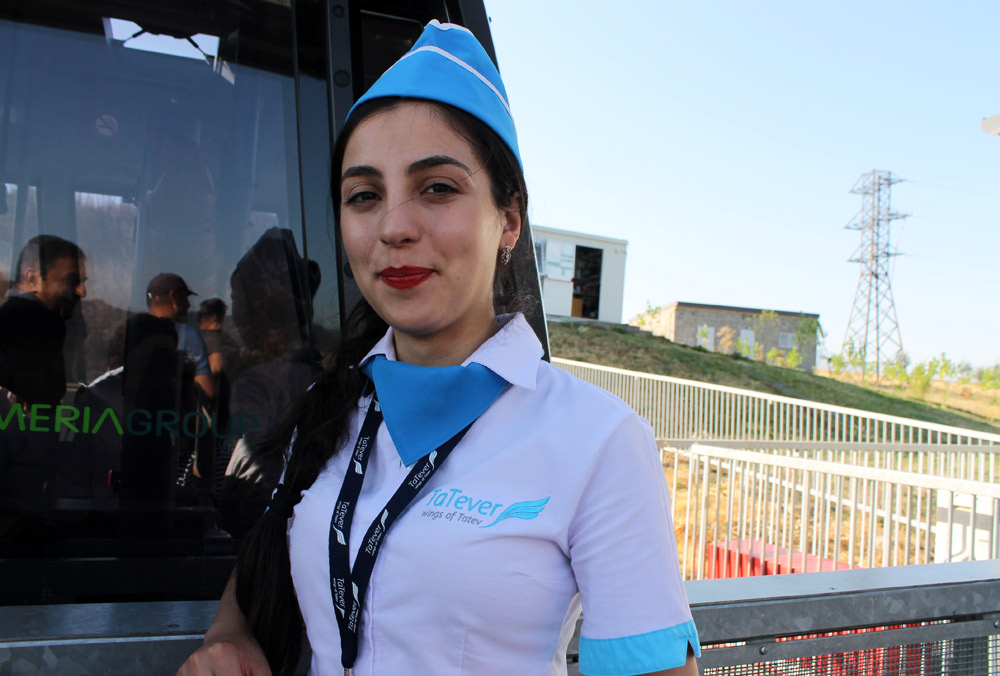 The one-way trip costs 3,500 AMD. A roundtrip costs 5,000. Revenues are used to renovate the complex. The oldest church dates to the 4th century. The main edifice, the St. Peter and Paul Church, dates to the 9th-10th centuries. Relics of the two disciples are said to be preserved here. 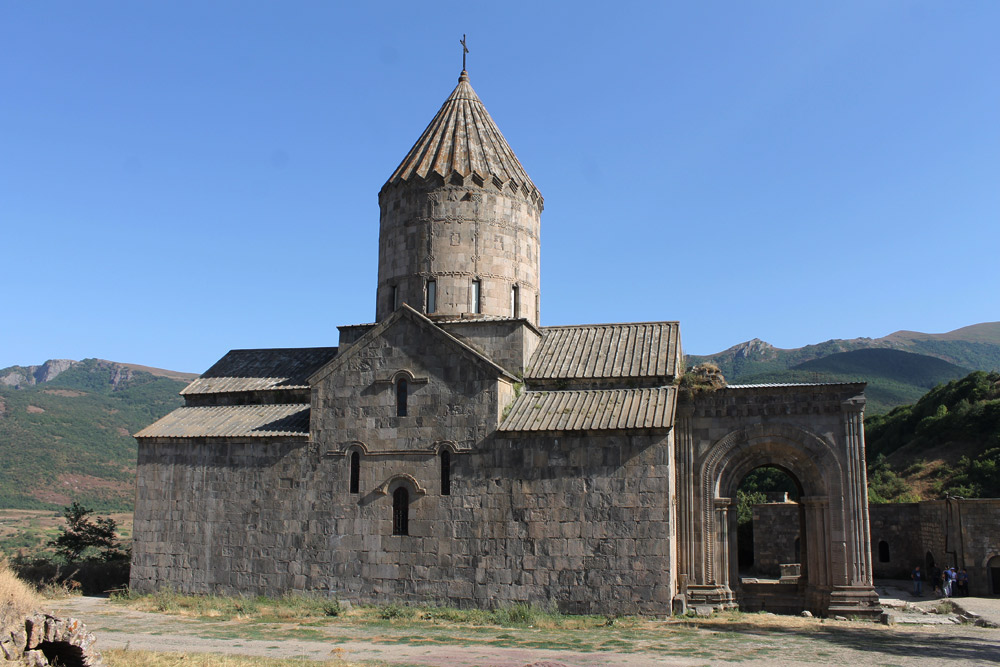 The 13th century belfry was destroyed in the 1931 earthquake, and has yet to be rebuilt. Only the foundation remains intact. But the bell still rings, calling the faithful to prayer.

The above photo shows the two bronze bells, cast in the 14th century. One is used, and the other sits on display. There is much to see at Tatev, which not only served as a religious center, but a place of learning and vibrant social and political activity. 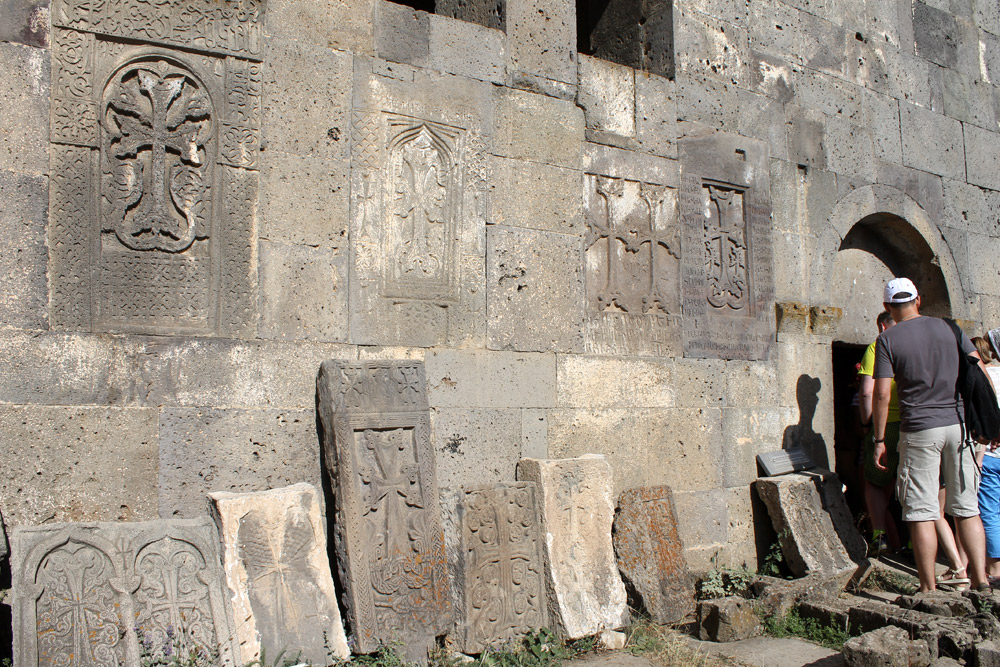 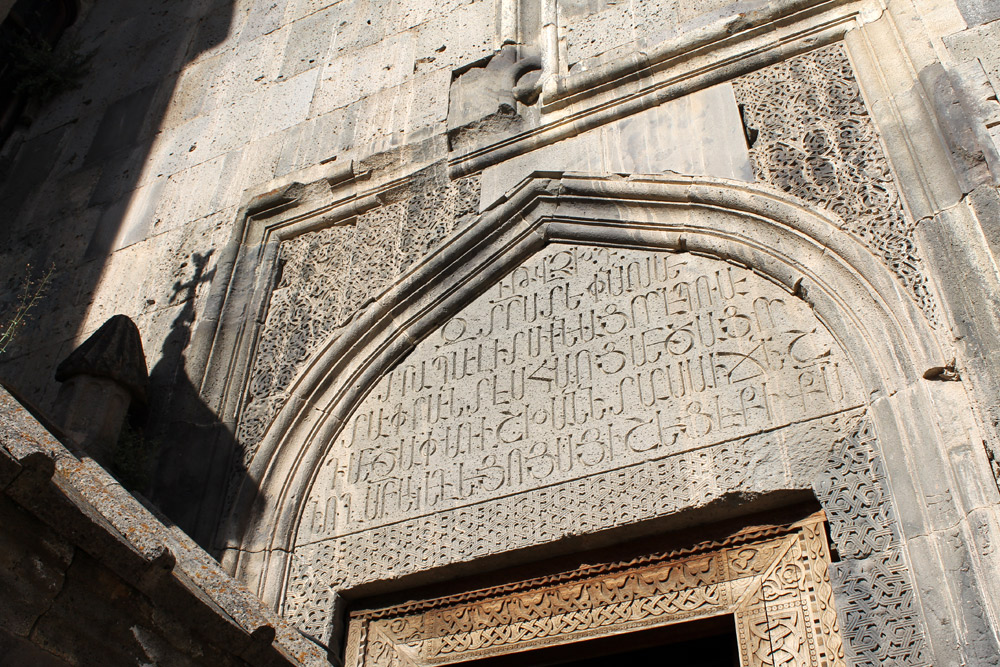 Tatev’s spectacular 10th century Gavazan Siun (pendulous column) is a monument dedicated to the Holy Trinity. Located to the south of the cathedral, it’s some eight meters tall and crowned with a khachkar-type cross.

Some say the key purpose of the column was to warn of minor earth tremors or approaching armies of marauders. Others associate the column to the constellation Orion.

One myth claims that upon seeing the column, a band of plundering Seljuks were so terrified at seeing the “devil’s column” that they threw themselves into the gorge.

Everything at Tatev has a story to tell, including these wooden doors.

The person most closely associated with Tatev is the philosopher, theologian and saint Grigor Tatevatsi (1346-1410). During his tenure as abbot, Tatev and its university experienced their most dynamic and creative period. His tomb is attached to the St. Peter and Paul Cathedral, at the entrance of the 13th century St. Gregory the Enlightener Church. The photo below, to the right, shows the locked entry to the tomb.

During the 1919-1920 war to keep Zangezour from falling to the Bolsheviks, Tatev was used as a major base of operations for Garegin Nzhdeh and his troops. The photo below, on the left, shows a monastery cell known by locals as “Nzhdeh’s room”. Like many other cultural monuments and nature sites in Armenia, Tatev has its share of graffiti in the name of young love. 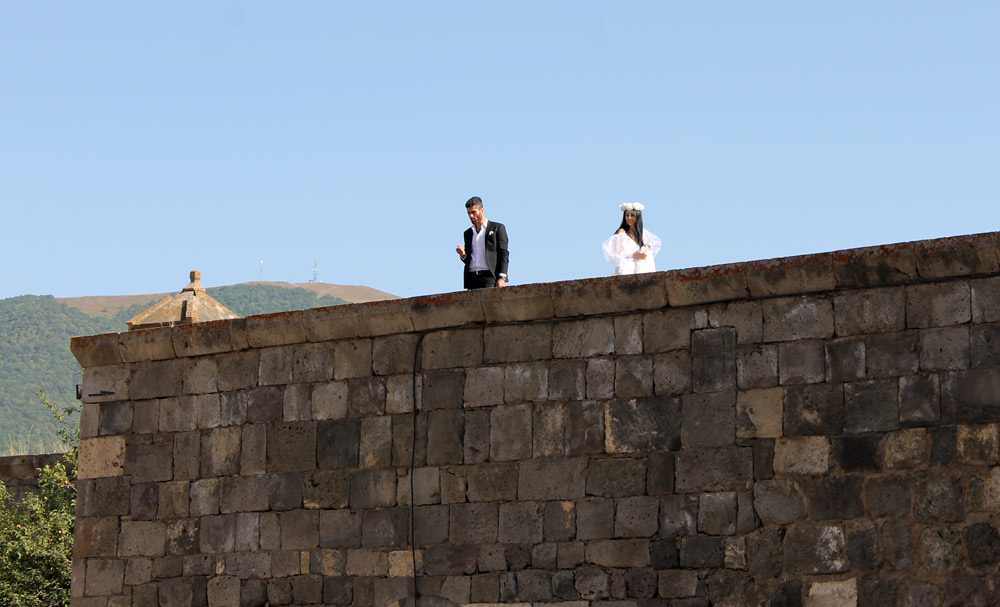 It would take hours for even a cursory look at all that Tatev has to offer – its churches, alcoves, oil mill, stone crosses, secret passageways, ramparts and other curiosities. It’s a place that demands more than one visit.

Sanjay Kumar Yadav 2017-09-07 08:40:14
World , one of the best beautiful country in the world ARMENIA. I am missing all the time. I am unlucky that I FAILED TO TRAVEL IN ARMENIA IN 1992-93. Due to poor condition life in Yerevan. God bless people of ARMENIA.