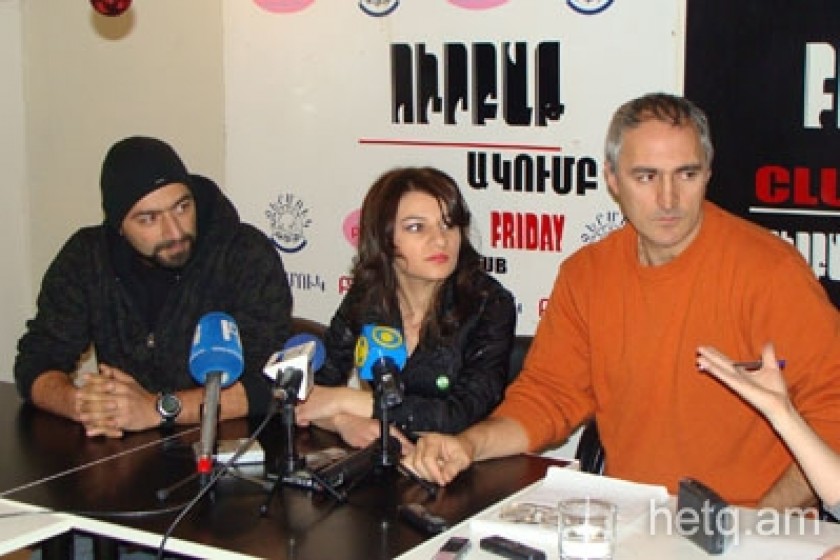 At a press conference today regarding developments in the Syunik village of Kajarants, Sardarapat Movement member Tigran Khzmalyan declared that “the main function of the ruling regime is plunder.”

Khzmalyan charged those in power with emptying the pockets of the people for the past twenty years and that the wealth of the nation has been concentrated in the hands of the few.

He charged the government is now bent of selling what little remains because it knows that its days are numbered.

Regarding the situation in Kajarants, where village lands have been designated “eminent domain” and whose residents are soon scheduled to be resettled, Khzmalyan argued that the mines the government wants to open do little to improve the lot of the people.

He said that it’s not a matter of “public interest”, but rather the “private interest” of a minority that fuels such disastrous policies.

Khzmalyan called the architects of such policies “blood-suckers”.

Tehmineh Yenokyan, representing the EcoLur NGO, said they were preparing a film about the situation in Kajarants. She claims that the government failed to organize public hearings on the issue before declaring the lands in question “eminent domain”.

Yenokyan said that Kajaran isn’t the only village in the area to be affected, recounting that when she last visited, the village mayor pointed to nearby mountains that will be dynamited to make way for the mine. 600 hectares in all have been so designated, she said.

Yenokyan told reporters that villagers are not looking for compensation but just the right to remain in their native village.

Yeghia Nersisyan, from the Save Trchkan Waterfall group, said that he too had recently visited Kajaran and that the activists had a run-in with Syunik Governor Souren Khachatryan.

Nersisyan said that Khachatryan didn’t take kindly to the environmentalists and even tried to hit a few of them.

At this, Khzmalyan chimed in, saying that the Syunik Governor couldn’t even find the road to the village. “He has a better sense of direction regarding Yerevan’s Marriott Hotel than his own backyard.”

Khzmalyan said the mayor of Kajaran, who just days ago resigned rather than sign a contract handing over village lands, “is a much more mature politician than the president.”

Yenokyan said that EcoLur has data showing unsafe traces of mercury and arsenic in the hair of Kajaran children and that parents haven’t a clue what to do.