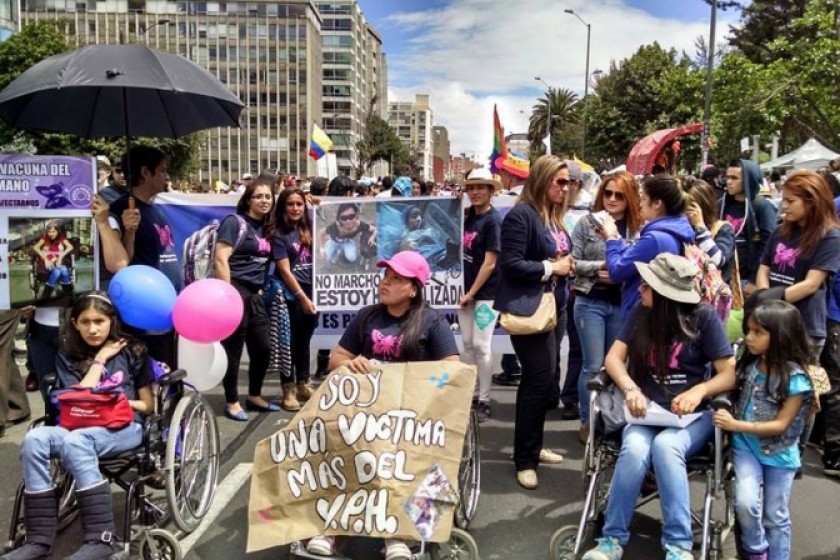 700 Women in Colombia Vaccinated with Gardasil Sue Merck for $160 Million: Researcher Advices Girls in Armenia to Understand the Risks

Hetq explores the efficacy of the Gardasil vaccine imported to Armenia. The vaccine is supposed to prevent HPV (Human Papillomavirus - the most common sexually transmitted infection). Hetq contacted  Mario Lamo-Jiménez, a journalist and anthropological researcher in Colombia, who has raised concerns about the side effects of Gardasil, and who is now assisting attorneys prosecuting the collective action lawsuit filed by 700 women in that country demanding some $160 million in compensation from Merck, the vaccine’s producer. Here’s a portion of our talk.

When was the mandatory application of the HPV vaccine in Colombia introduced, and what age group women were/are in the program?

The vaccine against the HPV was introduced in Colombia in 2013 in a strange fashion: Congress created a law (Law 1626, approved on April 30, 2013) stating that vaccination against HPV was “free and mandatory to the target population”. The government spent close to a hundred million dollars on vaccines and started the vaccination program, in which neither the families nor the vaccinated girls had a word to say about it. The vaccine was mandatory for girls from 4th to 7th grade, or ages 9 to 17.

What type/types of HPV vaccine was used in Colombia as part of that program.

How does the mandatory aspect of the program work? What if a girl refuses the vaccine?

The girls were vaccinated at their schools. They never received an informed consent to sign. There was no chance to refuse the vaccine. The vaccination program established a quota of vaccination that had to be met. However, after a lawsuit, the Constitutional Court of Colombia issued an amendment to the law stating that the vaccine wasn’t mandatory and that if a person wanted to refuse it, it was their right, and that there was a right to an informed consent.

When and why did you decide to explore the side effects of the HPV vaccine?

What are the main conclusions of your research?

This is an ongoing research. I have published my conclusions in newspaper articles and videos. For this purpose, I have read dozens of scientific papers about the vaccine, read relevant books by doctors doing research about the vaccine, talked to the affected girls and families, and participated in two international conferences in the US talking about the side effects of the vaccines in Colombia and exchanging information with scientists, journalists and activists.

My first article about the dangers, published in 2013, was censored by a Colombian paper (eltiempo.com) arguing that such dangers didn’t exist. I had argued in the article that Gardasil was an unsafe vaccine that had cause several deaths and disabilities in young girls and that a judicial organization in the US, Judicial Watch, had uncovered through a Freedom of Information Act petition that Gardasil had caused several deaths in the US and disabilities, and that this information was concealed from the public, please see the following link.

Judicial Watch, the public interest group that investigates and prosecutes government corruption, announced today that it has received new documents from the U.S. Food and Drug Administration (FDA) under the provisions of the Freedom of Information Act (FOIA), detailing reports of adverse reactions to the vaccination for human papillomavirus (HPV), Gardasil. The adverse reaction reports detail 26 new deaths reported between September 1, 2010 and September 15, 2011 as well as incidents of seizures, paralysis, blindness, pancreatitis, speech problems, short term memory loss and Guillain-Barré Syndrome. The documents come from the FDA’s Vaccine Adverse Event Reporting System (VAERS) which is used by the FDA to monitor the safety of vaccines. The documents were obtained pursuant to a September 15, 2011 FOIA request for reports made from September 1, 2010 through September 15, 2011.

Through the years I have published more information regarding the side effects of the Gardasil vaccine in Colombia. The following summarizes my major findings:

2-There are several disorders induced by the vaccine that we have seen in the affected girls in Colombia besides the ASIA syndrome. One of them is early menopause, where there is a premature ovarian failure in the affected girls and they become sterile. We have seen several cases in Colombia and this is one of the articles that reports this disorder:

“Girls and women who receive the Gardasil vaccine to prevent cervical cancer may be at increased risk of a rare but serious disorder of the nervous system in the first few weeks after getting their shots, researchers report.”(1,2)

4-As documented by US researcher Lloyd Philips, whom I have interviewed personally, Gardasil doesn’t kill or prevent cancer but can increase the risk of getting it. This is a quote from his website:

“MERCK spent $100,000,000.00 in advertising in the first-year roll-out of Gardasil to "educate" (scare) people into wrongfully believing that Gardasil could prevent cancer. Gardasil neither prevents cancer nor kills cancer. Gardasil and Gardasil9 have both been documented to CAUSE cancer, and MERCK's own clinical trial data submitted and on file with the FDA shows that Gardasil CAUSES a 44.6% INCREASED RISK of CANCER if given to someone already exposed to HPV. Exposure could be sharing a towel, washcloth, beverage, toothbrush, makeup, etc., with a sexually active friend or family member, including a parent.”

Have you got any responses from relevant state agencies?

I have published several articles regarding the Gardasil vaccine, exposing its risks and documenting victim’s testimonies, see for example this video.

It was presented at a HPV conference in Colorado this years. Neither the government of Colombia or the Ministry of Health have responded to my articles in any fashion.

As a researcher, do you think the vaccine administrators are properly examining women in Colombia before vaccination to exclude side effects?

There aren’t any examinations performed in Colombia before the application of the Gardasil vaccine although the manufacturer explains in the insert that the vaccine shouldn’t be applied to girls that are already infected with HPV or pregnant. As a matter of fact, one of the affected girls by the vaccine in the Colombian town in Carmen de Bolívar, was pregnant when she was vaccinated.

How many lawsuits are there in Colombia demanding compensation of vaccine effects?

There is currently only one lawsuit asking for compensation for the victims of the vaccine. The lawsuit is currently in process against Merck for 160 million dollars.

You said that you worked with the lawyer of the girls who got sick because of vaccine and who took the case to court. What exactly did you do in the court?

I have provided background information and translated studies from other countries into Spanish. Since my work is journalistic and informative, it is not being used directly in court cases, only studies published in science journals are actually used.

How many women have been affected by HPV vaccine according to that case?

There are close to a thousand girls affected by the vaccine in Colombia, about 700 are being represented in the case against Merck.

Could you please detail some of the vaccine’s side effects, especially the worst?

There are many side effects listed by the manufacturer, you can see the list here:

Who will compensate the girls if they win the case? The company Merck, or the government?

Merck will have to compensate the affected girls.

The girls and the families were demanding an answer from the government: Why the girls were sick after the vaccine and what was the government going to do to treat them. The government responded that the girls were “mentally ill”, a prepared response possibly redacted by Merck or by a consulting company paid by them, which was used in several countries stating that this was a case of “mass psychogenic illness”.

How can the girls prove in the court that the effects are from HPV vaccine?

There are testimonies by several doctors and researchers that have documented that there is a direct link between the vaccine and its side effects. See for example.

What is your advice to girls in Armenia slated for vaccination?

The Armenian girls should ask for a complete list of the reported side effects of the vaccine and judge if the risks are greater than the benefits.

They have to keep in mind that vaccines are given to HEALTHY people and if girls are getting sick after receiving the vaccine something may be wrong with the vaccine. They should ask themselves why the whole population has to be vaccinated to prevent an HPV infection (not to prevent cancer since the vaccine supposedly prevents an infection that MAY cause cancer) that clears by itself in 98% of the cases. They should have the right of an informed consent, which means that they should have the right to know all the possible risks of the vaccine and should have the right to reject the vaccine if the risks outweigh the benefits. Also, they should keep in mind that this vaccine hasn’t prevent a SINGLE cancer since that can only be known in 20 to 30 years, since young girls don’t develop this type of cancer. Finally, they should ask for an alternative, like a Pap Smear that has helped to prevent cervical cancer more than anything else without any side effects.