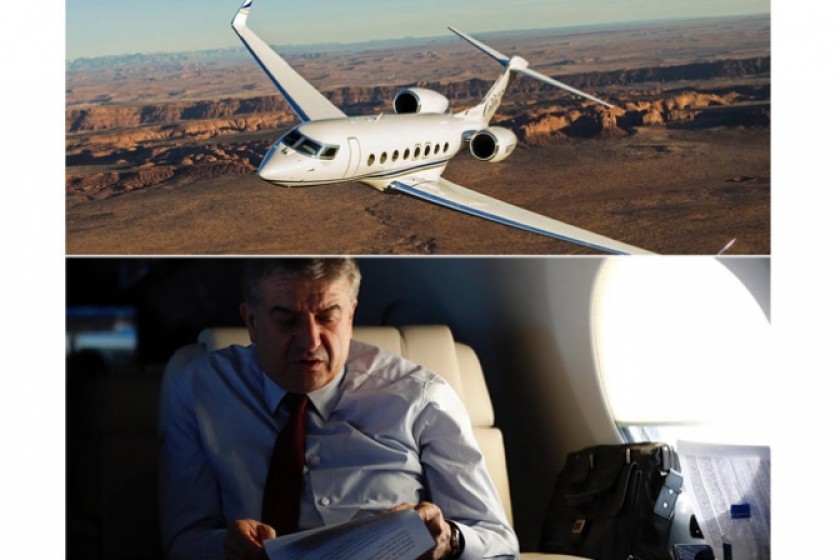 Armenian Prime Minister Flies to Davos on a Luxury Jet: Who Owns the Plane?

To date, Armenian prime ministers have mostly used the services of the presidential airplane for their official trips.

However, on January 22, Armenian President Serzh Sargsyan flew to France, while Armenian Prime Minister Karen Karapetyan had to leave for Davos on the same day.

The presidential plane had left, and so, Karapetyan had to get to Davos somehow on another plane. The prime minister and his entourage made it to Davos, but not on a commercial airliner. As far as we can ascertain, Karapetyan flew on a plane belonging to businessman Samvel Karapetyan.

Later that day, Prime Minister Karen Karapetyan posted some photos from the airplane he took on his official Facebook page, which showed a luxury aircraft. This created a furor in Armenian news outlets and social media.

On the night of January 26, the Prime Minister's delegation arrived from Zurich (the closest airport to Davos is there) in Yerevan by the presidential airplane (flight ARY 4002), as seen at www.flightradar24.com and www.planefinder.net. 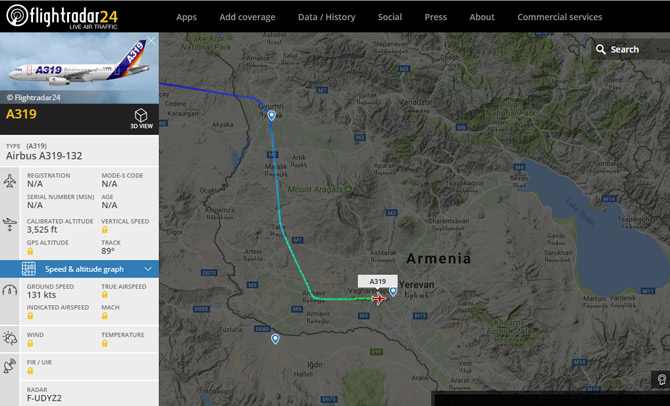 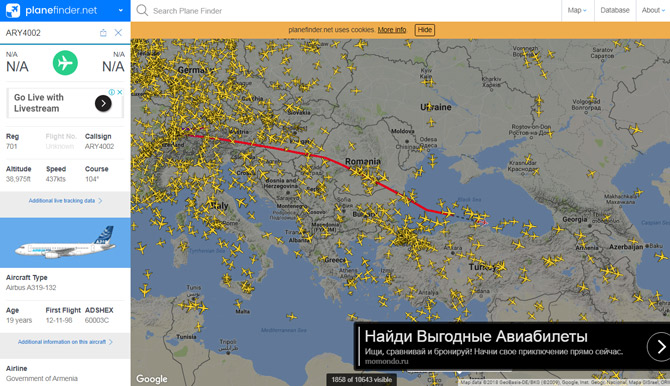 The flight route shows that it arrives from Zurich to Yerevan. Its type - Airbus A319-132, and registration number 701 (this is a military registration, since it was included into the military aircraft registry at the end of 2014), prove it to be the presidential airplane. 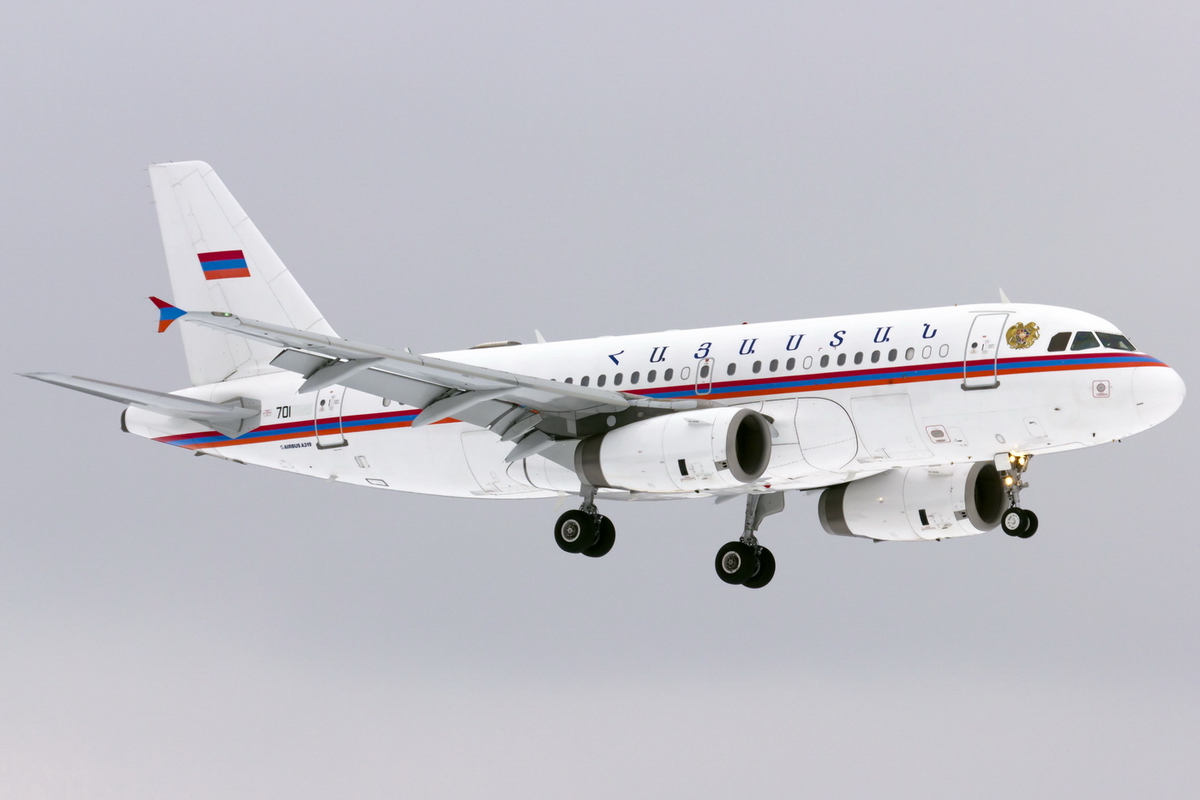 Thus, after bringing the presidential delegation back to Yerevan on January 24, the plane left for Switzerland to bring back Karapetyan's delegation.

The Zvartnots Airport website usually shows not only regular flights by large and small airlines, but also flights by different private carriers. Nevertheless, no flight to Zurich has been registered.

Judging from the photos posted on Karen Karapetyan’s Facebook page, particularly the design of the salon and seats, it was an American Gulfstream G650 (flies 13,000 km) or Gulfstream G650ER (flies 14,000 km). Both can transport up to 19 passengers.

There are various amenities inside - a sofa, TV set, kitchen, luggage compartment and so on.

The manufacturer, Gulfstream Aerospace, can provide more than 120 options for the salon and seats.

In short, G650 is a jet airplane that meets the capricious demands of the rich, and it’s used by various businessmen and officials all over the world.

Here's an example of a G650ER interior.

According to various data available online, a one-hour lease costs $4,800-$10,000. The flight from Yerevan to Zurich takes around three hours, which means that the flight time itself would cost at least $14,500.

The Information and Public Relations Department of the Armenian government reports that "the Prime Minister left for Davos on a private plane, but no money was allocated from the state budget for its lease".

Since it’s hardly possible that somebody from the prime minister’s office would have paid a few thousand dollars from their pocket, the only remaining option is a third person’s involvement. However, since it’s about a high-ranking official, there is an issue of ethics and conflict of interest in the case.

According to information available on the Internet, famous Swiss-Armenian businessman and philanthropist Dikran Izmirlian owns a G650. 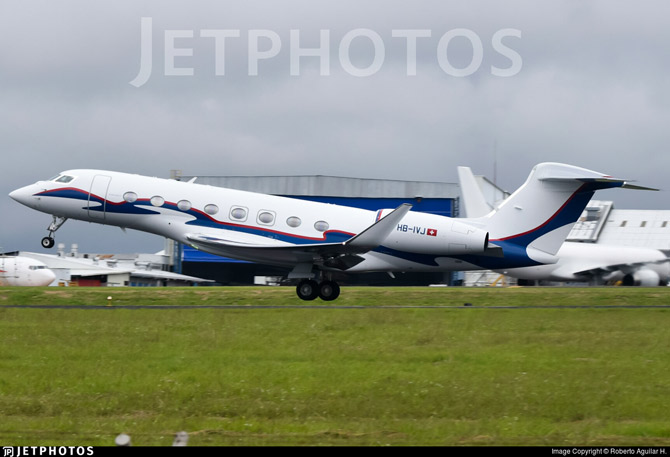 His plane is managed by ExecuJet, known for its charter flights. The company has many branches in different continents, with a head office at the Zurich Airport, managing more than 250 aircraft belonging to private owners, commercial and state institutions. 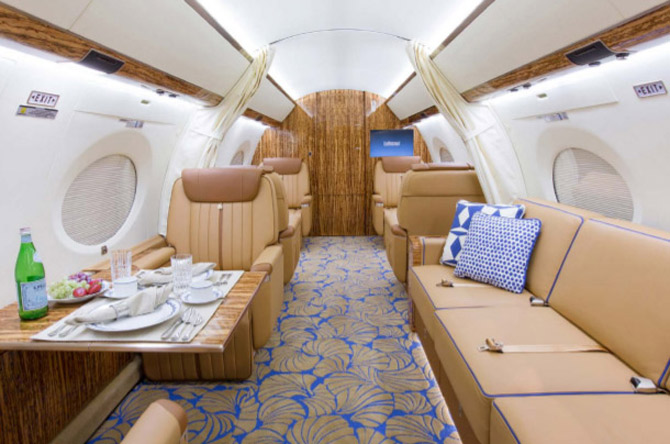 Nevertheless, the design of Izmirlian's aircraft salon (in the photo above) differs from the one that transported Karen Karapetyan (if we exclude the possibility of modification of the Armenian businessman's aircraft). 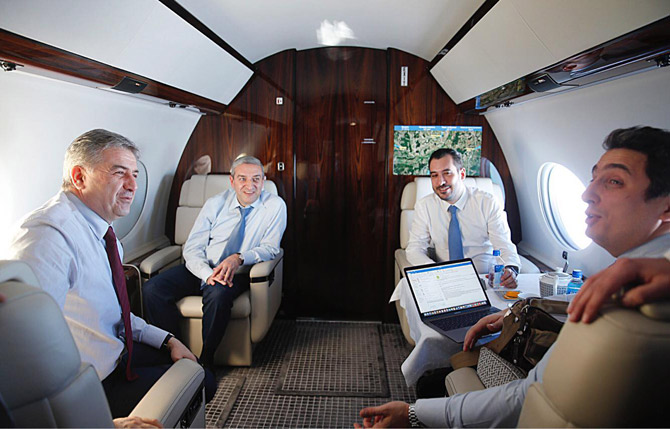 In February 2015, the Russian edition of Forbes magazine published an interview with the businessman who said: "I do not own yachts or rare paintings. Of course, I like luxury, but I never cling to it and do not make it an idol. It’s simple: I liked a plane - I bought it. But not for the sake of saying that I have it.”

Zara Atchemyan, representative of the Tashir group of companies owned by Samuel Karapetyan, told RFE/RL that she didn’t want to comment on the information that the businessman's plane had been used for the prime minister’s trip to Switzerland.

In other words, she didn’t deny it.

The two Karapetyans, Karen and Samvel, are close friends, and the prime minister is also the godfather of the businessman's younger son, Karen.

Haykakan Zhamanak compared the jet transporting the prime minister with another one (allegedly belonging to Samvel Karapetyan), in which the businessman's grandchild is seen. 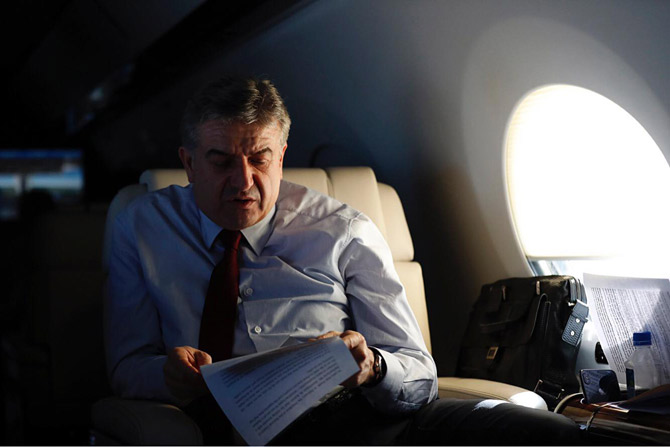 In one of the avia-forums, there is a suggestion that Samvel Karapetyan owns a French Falcon plane, but the appearance of the hall and the style of the windows is different from the one that transported the prime minister.

So, we must conclude that the official delegation of Armenia flew to Davos on Samvel Karapetyan's Gulfstream G650.

Kkt 2019-01-25 08:30:30
At a time when things are taking a more positive direction in Armenia for the first time in 10-15 years, where we are getting small but tangible changes in this country, does the lending of a plane to a pm really matter? Would samvel karapetyan have received less access to government circles than he does now? Maybe kk should have hitchhiked to davos instead of taking a plane, im sure that would have impressed other world leaders. Although the principle is correct, its such a cheap shot. There is embezzlement of millions and billions in armenia by various unsavoury characters in armenia, lets expose them (as we have seen on hetq in the past) instead of whose plane kk flew on. Just a thought.
ani 2019-01-25 08:30:30
I fear Bedros is right-- one hand washes the other.. Fortunatly, GOD sees everything and will judge righteously
GB 2019-01-25 08:30:30
There is nothing wrong with rich prime minister, as long as he is not part of corrupted oligarchs!!
Peter 2018-01-30 18:04:01
raffi, and KKT are correct, apparently, the plane was lended from Russia with money that did not affect the pockets of the Armenian taxpayers, no need for drama here guys!
raffi 2018-01-29 19:39:23
Where is the controversy here? The Prime Minister flew to a meeting and managed to save the Armenian taxpayers $14 000 in unnecessary spending. Sounds good to me ! @Levon: Actually, Samvel Karapetyan made his money in Russia before the Republican Party even came to power.
Levon 2018-01-29 14:39:11
How did Samuel Karapetyan get so rich???? By intimidation and corrupt business practices, all sanctioned by the ruling Republican Party of Armenia.
Bedros 2018-01-28 17:14:00
Just shows how close these oligarchs are to the ruling regime. Kind of cements their relations. I give you a plane and you'll turn a blind eye to pursuing your much vaunted corruption campaign. Everyone's in bed with each other in Armenia.