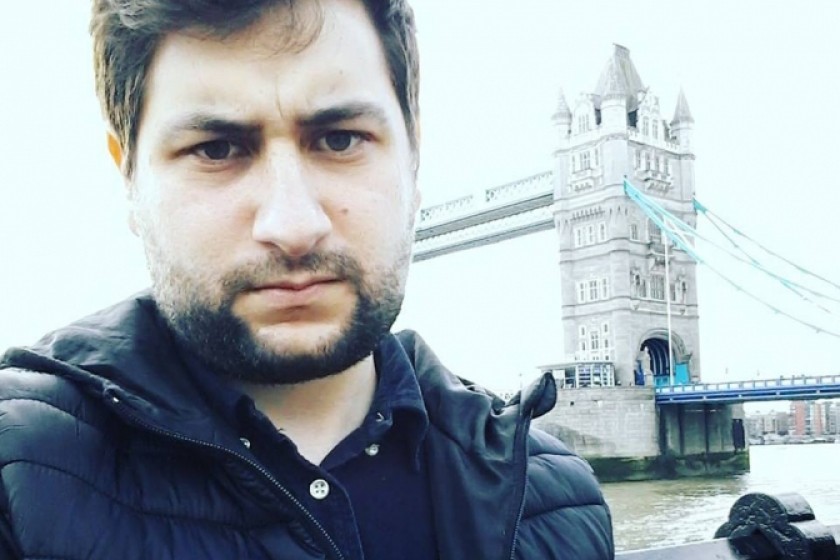 Hambardzumyan was one of the anti-Serzh protesters who were trying to close the street to traffic.

The Red Berets took Hambardzumyan to a waiting car and proceeded to beat him. They spat on him and concluded the attack with a series of sexual expletives.

Hambardzumyan, a pharmacologist who studied and works at Oxford University, told Hetq the following.

“We had shut off Metz Tigran Street at eight this morning; the section near the Pedagogical University. Then we closed the section leading to Khandjyan Street. We had peacefully executed our rights.

“All at once the Red Berets appeared and started to push us around. They wanted us to remove the trash bins and open the street. That’s when I laid down on the street to halt traffic. They threw me to the sidewalk. I returned to the street. The Red Berets then took me into custody.

“There were four or five of them; bigger than me. They handcuffed me and dragged me into the car. They started beating me even before the car drove away. My body is black and blue. They threw me to the ground and kicked me, yelling out terrible sexual expletives. They spat on me three times. They told me they wanted to belittle me. They never told me why I was detained. They told one of my friends that it was because I hadn’t behaved.

“They seized my telephone. In the car, on the way to the police station, two of the guys sat on me. Reaching the station, I felt weak on my feet and demanded they call an ambulance. It took twenty minutes to convince them to call an ambulance. There was no lawyer present at the station, and my rights were never fully explained to me. They searched me and my bag, finding my student card. After holding me for two hours, the emergency doctor said I needed to be hospitalized. They took me to the Erebouni Medical Center.”

Vahan Hambardzumyan has since been discharged from hospital and has rejoined the protesters.

John Smith 2019-01-25 08:30:32
Let them do whatever they are good at, but be sure, this way they are proving themselves and to the world why the protests started in the first place...good job government..good job...