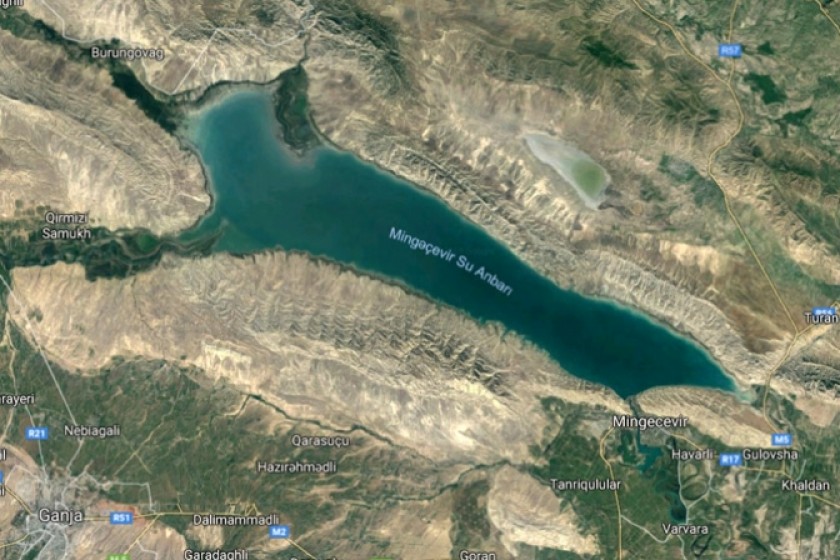 Azerbaijan is still reeling from a massive blackout that occurred on July 3 when a fire broke out at  a major thermal power station located in Mingachevir, the country’s fourth-largest city.

39 cities and regions, including the capital Baku and Ganja, Azerbaijan’s second largest city, were engulfed in darkness, resulting in widespread traffic jams and people stuck in subways and elevators.

Water distribution was shut down and the country’s petroleum production was negatively impacted.

The thermal plant, owned by the state agency AzerEnergy, is the largest electricity producer in Azerbaijan.

After AzerEnergy claimed that power had been restored later in the day, downtown Baku and the town’s suburbs went dark yet again that evening.

Azerbaijani President Ilham Aliyev hastily convened a meeting of government and AzerEnergy officials on July 4, in Baku, to clarify what had happened. AzerEnergy head Etibar Pirverdiyev stated that the hot weather and increased demand caused the blackout. Aliyev wasn’t pleased with this answer, this according to the Regnum news agency. 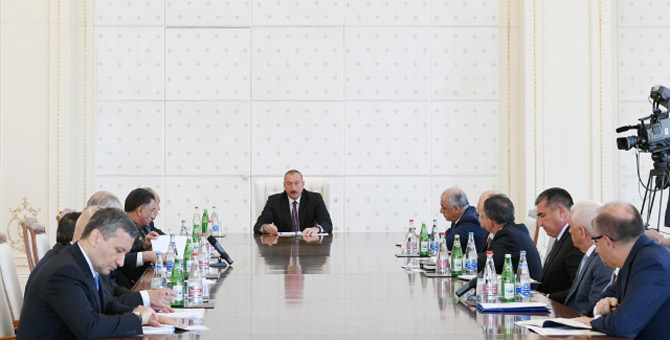 Aliyev responded that such accidents do not occur in countries with hotter climates and, if they do, the entire power grid doesn’t go down.

“Accidents can happen. They can’t be ruled out. But for the entire power grid to be impacted due to an accident is a serious matter. Why has the country been thrust into darkness? Why did the electric stations in Baku, Sumgait and other towns stop working after the incident in Mingachevir?” Aliyev asked.

And the July 3 fire wasn’t the only one. Another fire broke out on July 5 at the same thermal power station according to MeydanTV. 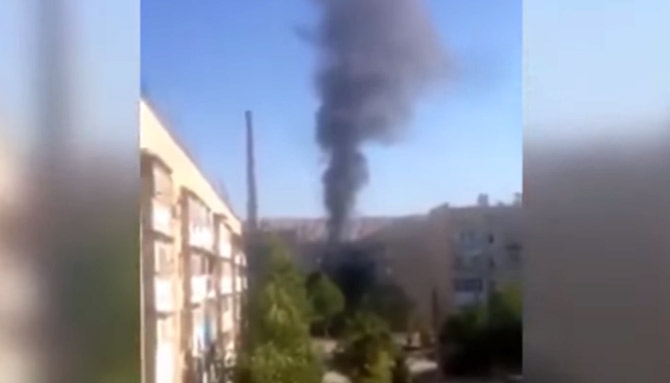 AzerEnergy’s press spokesman Yakhya Babanli told the BBC that the country’s energy infrastructure was old and that piecemeal repairs wouldn’t help. Babanli said that it would take some time to restore power.

Babanli repeated Pirverdiyev’s explanation that a 40% increase in demand during the two days before the July 3 fire was the culprit and that the cooling systems weren’t operating effectively.

As stated above, the Mingachevir power station is the biggest in Azerbaijan, supplying some 45% of the country’s electricity. It turns out the accident caused the shutdown of other power stations in the country.

The BBC says that such a massive blackout occurred in 2002. Babanli, however, stated that after the 2002 outage scores of power stations were put into operation. Babanli gave assurances at the time that Azerbaijan would not experience another large power outage.

Aliyev has set-up a government commission to investigate the causes of the blackout. The BBC writes that Azerbaijan Prosecutor General Zakir Gharalov has noted that preliminary findings show that the accident occurred in the station’s generators due to construction code violations in the cooling system.

Given that the Mingachevir power station isn’t that far from the Artsakh-Azerbaijan Line of Contact, one wonders if the accident will impact the conflict. 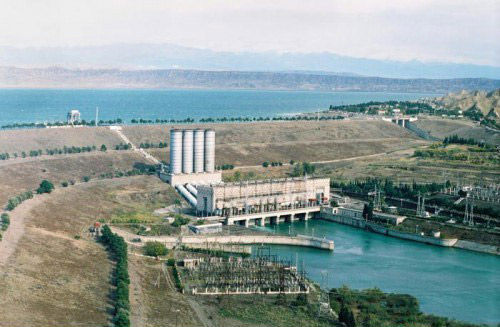 The Mingachevir Reservoir, built on a section of the Kur River, is the largest in Transcaucasia with a volume of 16.1 cubic km. Its waters are used to generate electricity at the eponymous hydro power plant, the most powerful in Azerbaijan, at 402 megawatts.

At an Armenian government cabinet session on August 7, 2014, following the July clashes with Azerbaijan along the  Artsakh and Tavush borders, Armenian Minister of Emergency Situations Armen Yeritsyan declared that the country’s Civil Defense Service could muster 4,000 troops to defend the borders, just like Azerbaijan was doing. Armenian Defense Minister Seyran Ohanyan added that the Troops of the Civil Defense of the Azerbaijani Ministry of Emergency Situations were mainly protecting the Mingachevir Hydro Power Plant, fearing an attack by the Armenian forces. The news raised a general alarm in Azerbaijan. In response, the Azerbaijani Defense Ministry issued a statement the next day saying "the Armenian people should know that the response to any sabotage attempts against Mingachevir Hydro Power Plant from the Armenian side will be more miserable", and cautioned that Azerbaijan had the capability to raze Yerevan, Armenia's capital.

During the April 2016  Artsakh “Four Day War”, the Azerbaijani military was shelling the area around the Mataghis Reservoir. They failed to destroy the dam. Artsakh increased security around the Sarsang Reservoir, the largest one in Armenia and Artsakh.

In April of 2016, Artsakh Presidential Spokesman Davit Babayan, in response to an observation made by the newspaper Haykakan Zhamanak that Azerbaijan was concerned that Armenian forces could blow up the Mingachevir Dam, said that, “War has its rules. If military operations start, it would be impossible to predict anything.”

The Artsakh-Azerbaijan frontline is also not far from the Baku-Ceyhan oil and Baku-Erzurum gas pipelines.

The accident at Mingachevir coincided with the start of large Azerbaijani military exercises on July 2,  involving 20,000 troops, 120 tanks, 30 aircraft, and more than 200 missile systems. Exercises were also conducted in Nakhijevan. 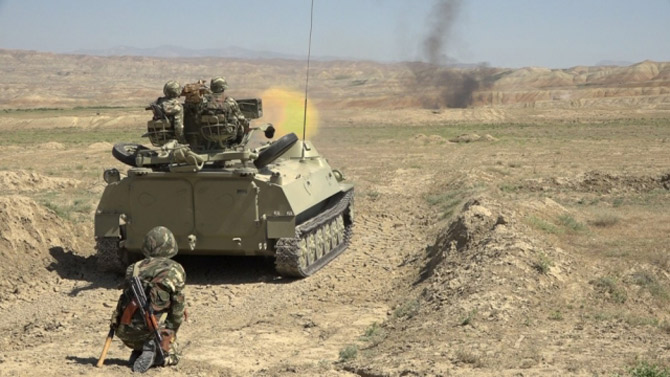 Azerbaijani Defense Minister Zakir Hasanov declared that the exercises were a “show of force” to Armenia.

While the exercises ended today, the Azerbaijani military remains in a bind due to the Mingachevir incident.

Hetq military sources say that the Azerbaijani military exercises were severely hindered due to the power outage, and that Azerbaijani counter-air defense systems have been compromised.

Regnum reporter Stanislav Tarasov wrote the following on the Mingachevir incident, Azerbaijani military exercises and the Armenian sides position towards them.

“The country-wide technological cataclysm shows what can happen in the wake of widespread military operations. One must remember that Mingachevir, with its electric power stations, is located only 50-60 kilometers from Talish. Baku and Yerevan are obliged to avoid a military scenario and reach an agreement. Nothing else will do.” (The Artsakh village of Talish was the scene of heaving fighting in the April 2016 “Four Day War”)

In other words, the Mingachevir accident, and its consequences, have shown that in the event of a largescale war, by merely destroying the Mingachevir Reservoir dam, Armenian military forces can not only inflict a blackout on Azerbaijan and paralyze its military, but can also flood the Kur-Arax valley under its 16.1 cubic km of water, with all its consequences.

Aram 2019-01-25 08:30:35
Electrical Power systems are very volnurable. Cyber attacs can be more siver than explosion of a dam. Our hackers need to work on problem.
GB 2019-01-25 08:30:35
There were an electrical short-circuit between Axeri presidential palace and her armed forces! Top Israeli engineering squads working hard to fix this terrible short circuit!
Vram 2018-07-06 23:17:19
If Azerbaijani counter-air defense systems were really compromised during the power outage, then that would have been the best time for the Armenian forces to orchestrate a massive air attack on Azerbaijan...
Ռուզաննա 2018-07-06 19:23:15
Շնորհակալություն հետաքրքիր հոդվածի համար: Իսկ անգլերեն եւ ռուսերեն թարգմանությունները կլինե՞ն: