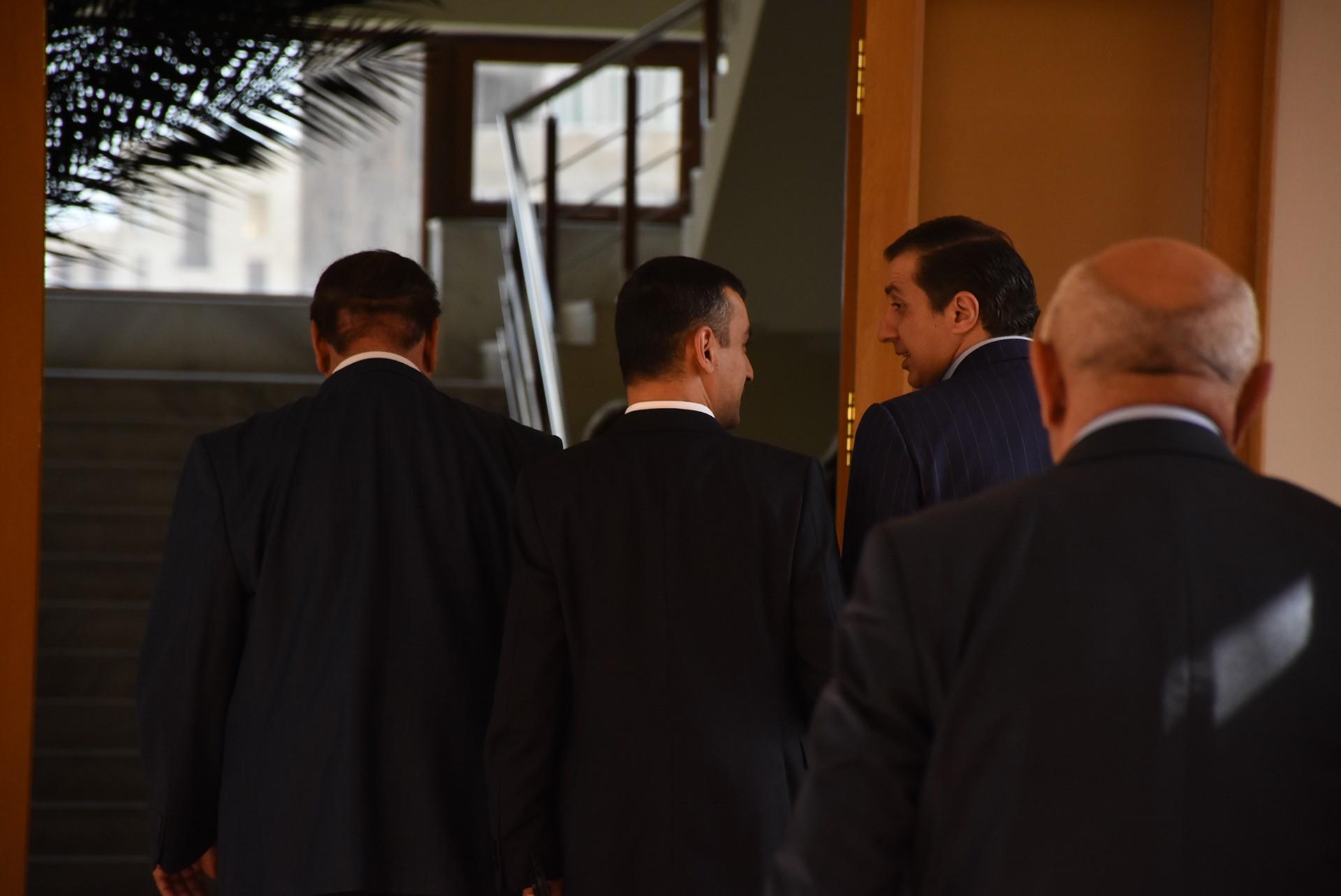 In 2016, after Hetq broke the story about Poghosyan’s offshore business interests in Panama, the SIS launched a criminal investigation, which it dropped in January 2017. Poghosyan was elected an Armenian MP on the Republican Party of Armenia ticket in May of the same year.

The decision document confirms Hetq’s original suspicion that the SIS dropped the investigation due to political expediency and merely went through the motions of conducting an investigation.

The SIS questioned only Poghosyan and his relatives, taking their denials of any wrongdoing at face value.

Following this spring’s “Velvet Revolution” in Armenia , Hetq attorney Ara Ghazaryan again petitioned the SIS for the decision. This time, they complied.

Hetq wrote about Poghosyan’s shady financial dealings in Panama and his Swiss banks accounts in April 2016, after data was uncovered in the Panama Papers. The data was obtained by the German newspaper SüddeutscheZeitung and shared by the International Consortium of Investigative Journalists (ICIJ) with the Organized Crime and Corruption Reporting Project (OCCRP) and more than 110 media partners from 82countries, including Hetq.

To make matters worse, the SIS stretched the truth when it stated that the investigation was closed because Swiss and Panamanian authorities refused to assist in the probe. This was a gross misrepresentation of the facts. The Swiss Federal Department of Justice rejected the SIS request for legal assistance only because it hadn’t been filed properly – certain requirements were nor fulfilled.

The Panama Papers show that Poghosyan, who held the rank of Major General of Justice at the time, owned shares in three Panama-registered companies: Sigtem Real Estates Incorporated, Hopkinten Trading Incorporated, and Bangio Invest S.A. (Poghosyan always maintained  that he had no affiliation with the companies.)

Poghosyan obtained shares in the first two companies in March 2011, when he was serving as Armenia’s Chief Compulsory Enforcement Officer. His dealings with Bangio Invest date to 2005.

Sigtem Real Estates Incorporated and Hopkinten Trading Incorporated are equal owners of Best Realty Ltd. registered in Armenia. Best Realty is linked to the Armenia’s Compulsory Enforcement Service (CES), the state agency headed by Poghosyan,  in that the company carried out appraisals of fixed and moveable property in CES cases.

It’s now apparent that the SIS did nothing more than to question Mihran Poghosyan and his relatives. The SIS’s senior investigator took Poghosyan’s testimony as the gospel truth and ordered the criminal case dropped.

Here, in a nutshell, is what Poghosyan testified to.

According to the testimony registered at the SIS, Poghosyan had no dealings with Sigtem Real Estates Incorporated or Hopkinten Trading Incorporated, and that the companies had no accounts with the Swiss LCT Bank (Suise) SA or any other bank.

Poghosyan testified that he only found out about the registration name mix-up after Hetq published its story. Harutyunyan backed up his testimony.

SIS Senior Investigator D. Kostandyan could have gone on line to research the primary data held by the ICIJ or Hetq to find out how Poghosyan’s 100% share ownership certificate was written up and later surfaced online. He could have requested that the ICIJ provide him with electronic mail shedding insight on correspondence between Mosac Fonseca lawyers and Poghosyan and the various documents shipped to Armenia.

These documents also include the scanned copies of passports belonging to the individuals in question. It’s highly unlikely that such copies were sent to Mosac Fonseca without their knowledge. In addition, money was transferred for these legal services. The SIS could have, if it wanted to, requested information about these transfers.

Senior Investigator Kostandyan did send an inquiry about the offshore companies to Armenia’s Central Bank, but his request was rejected. The bank said it didn’t have the authority to provide such secret bank data. 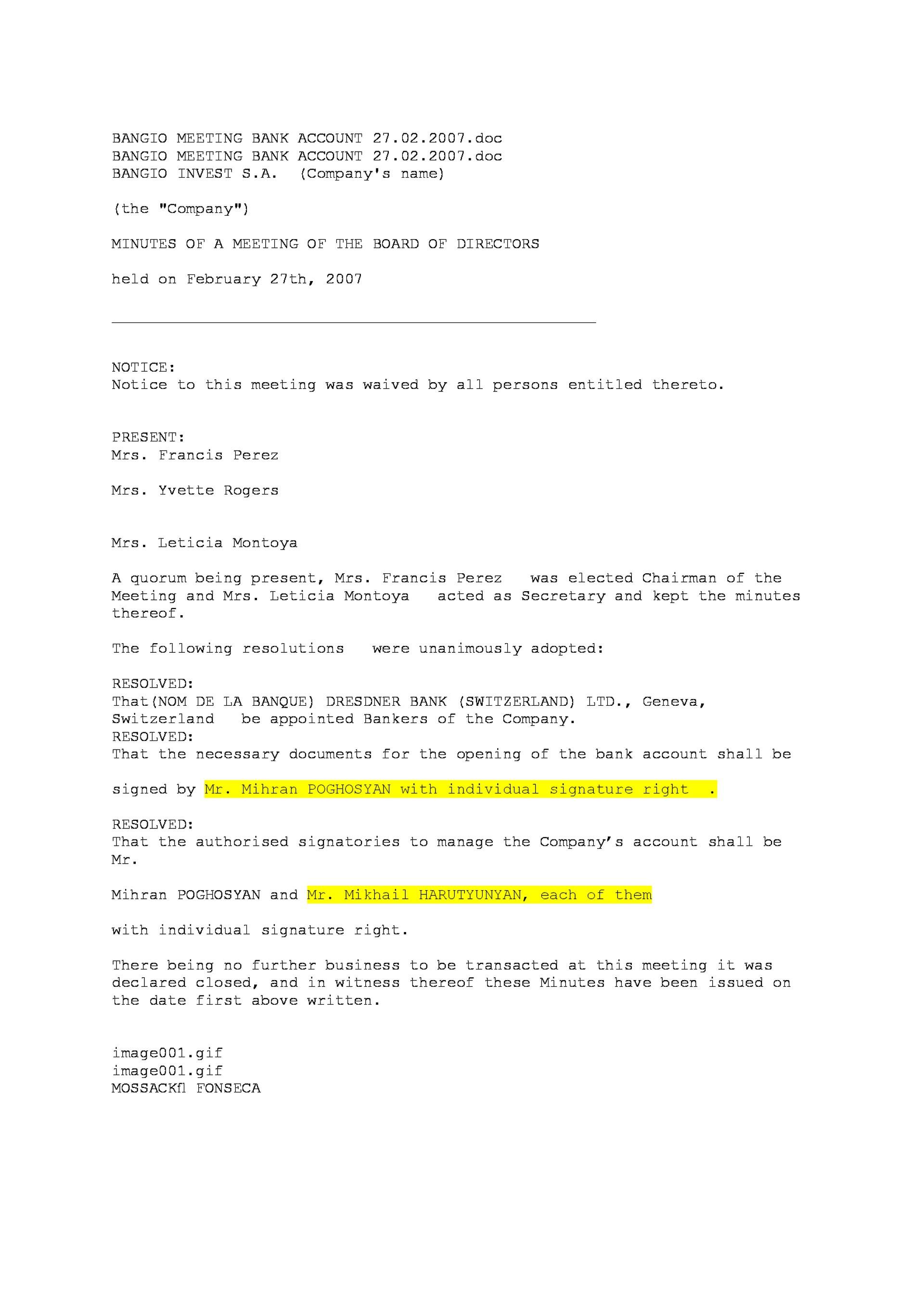 The investigator started down the wrong path of examination from the beginning since the SIS had already decided to drop the case against Poghosyan. The charges against Poghosyan would have included money laundering and the Central Bank would then be obligated to provide the information.

As the above confidential document reveals, the necessary documents to open the Bangio Invest S.A. at Dresdner Bank-Switzerland , used to conduct the offshore transactions, “shall be signed by Mr. Mihran Poghosyan with individual signature right.”

The SIS conducted no investigation into this matter. They believed Poghosyan when he testified that no bank account had been opened by him.

Readers can access other documents (see below) showing that Sigtem Real Estates Inc. and Hopkinten Trading Inc. opened accounts at LGT Bank (Suisse) and that Poghosyan was the sole authorized signatory to manage these accounts. 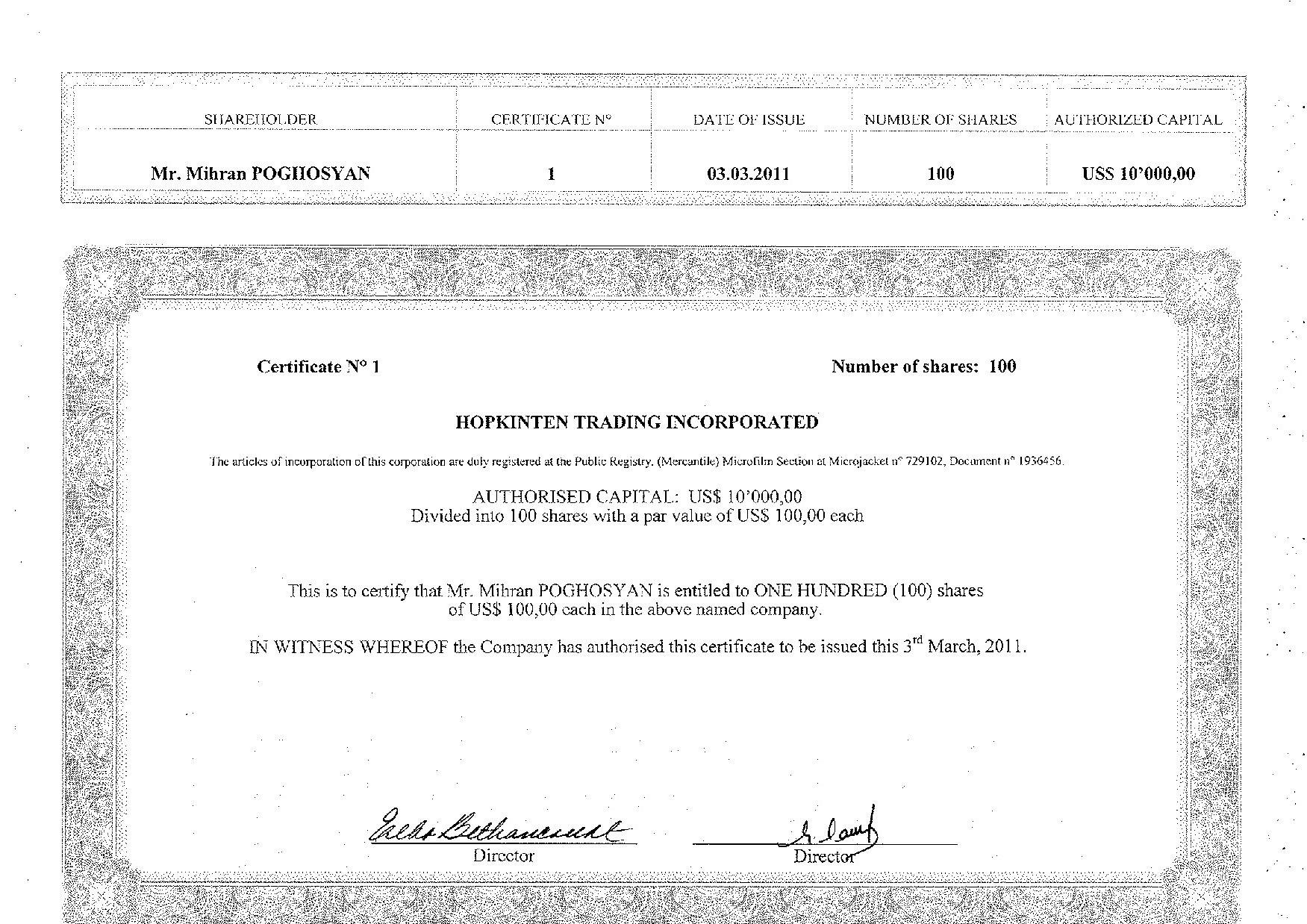 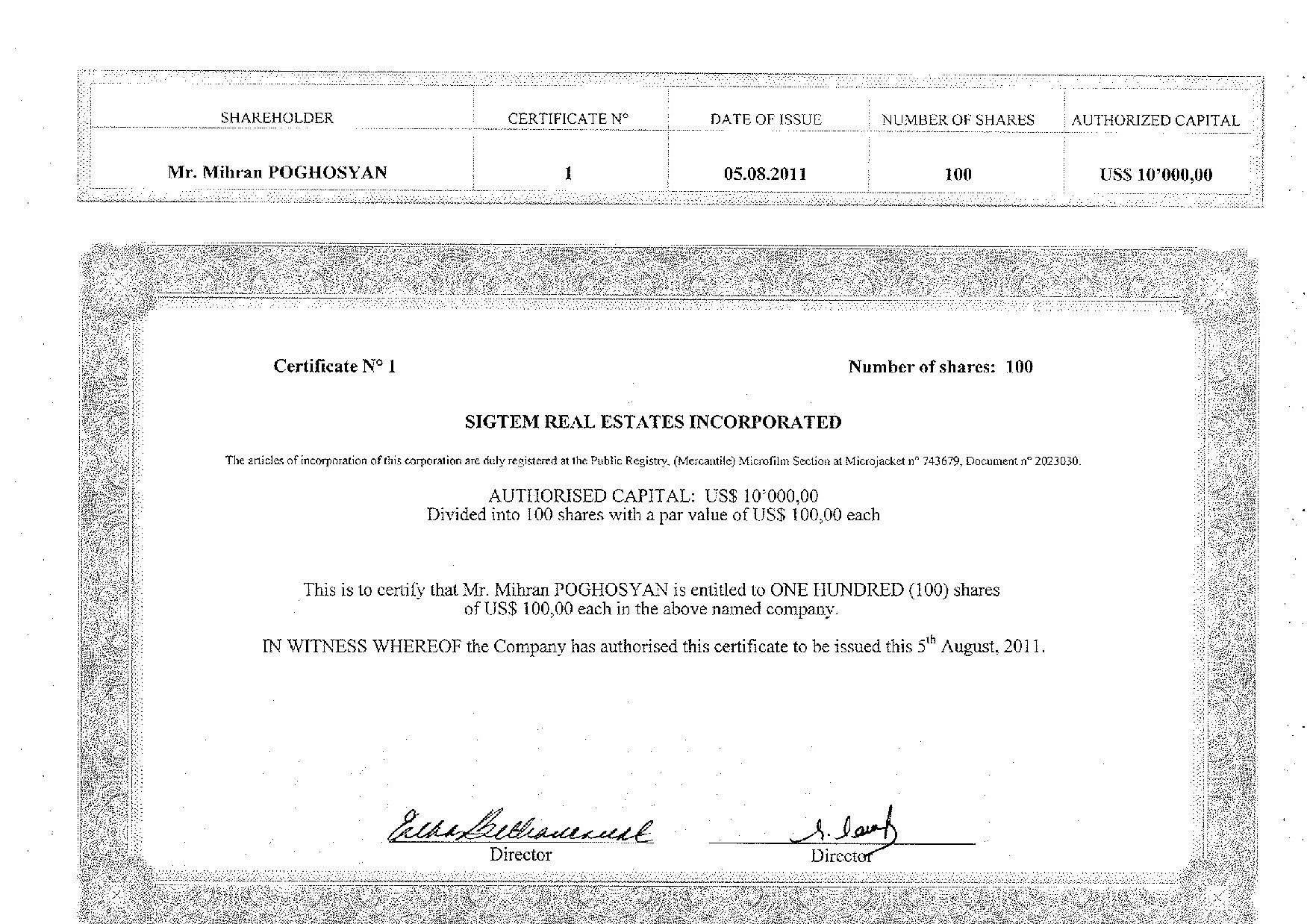 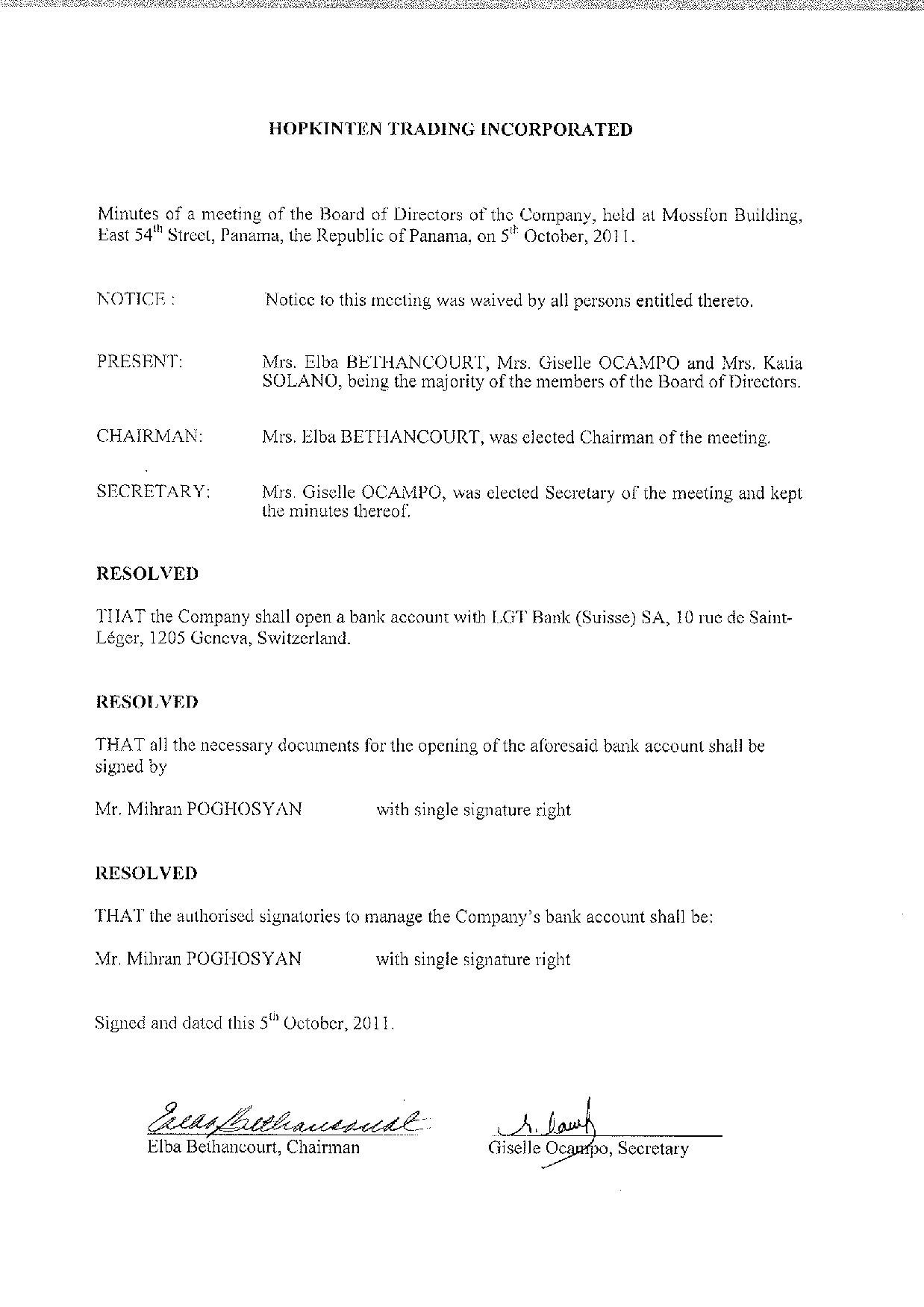 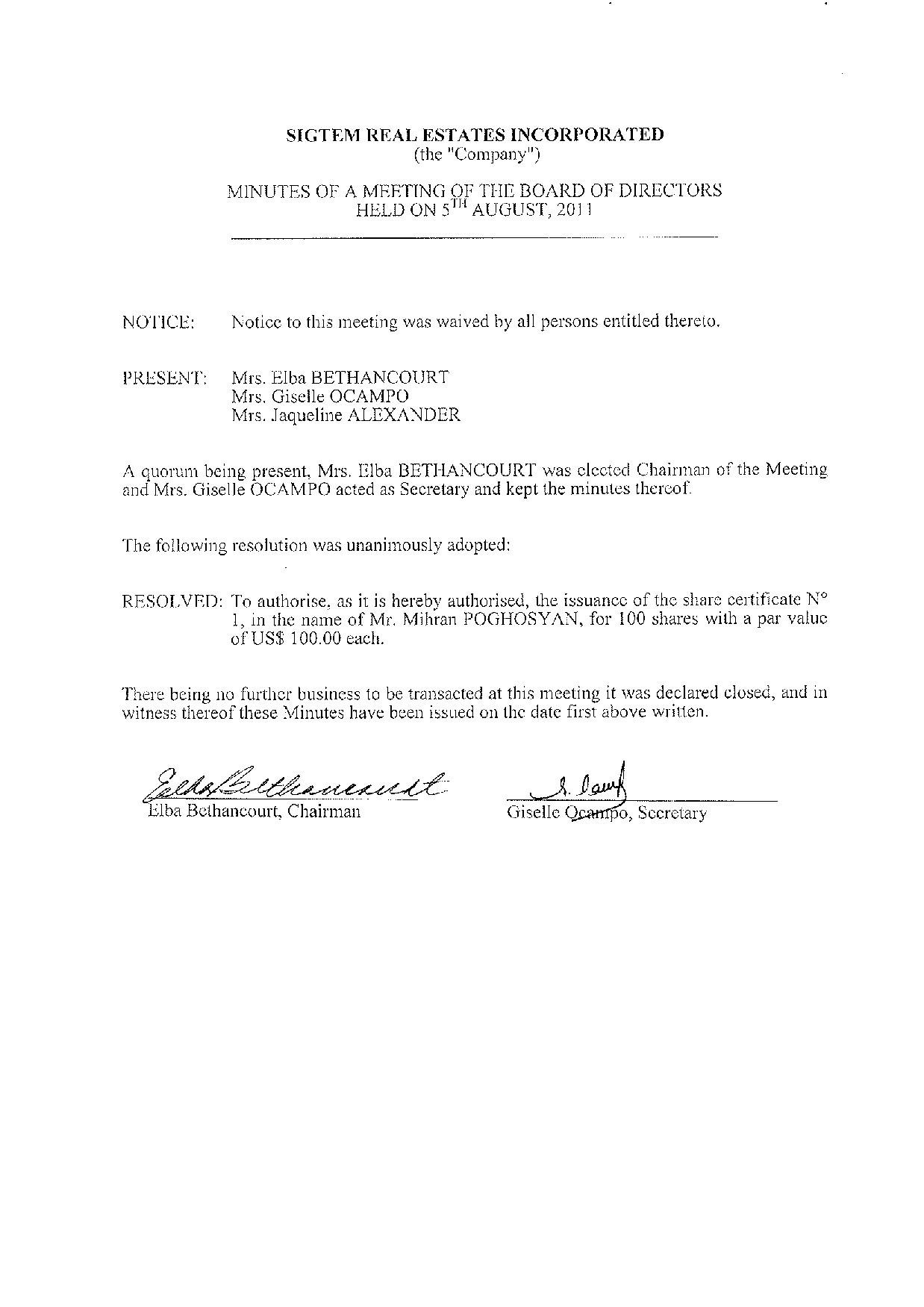 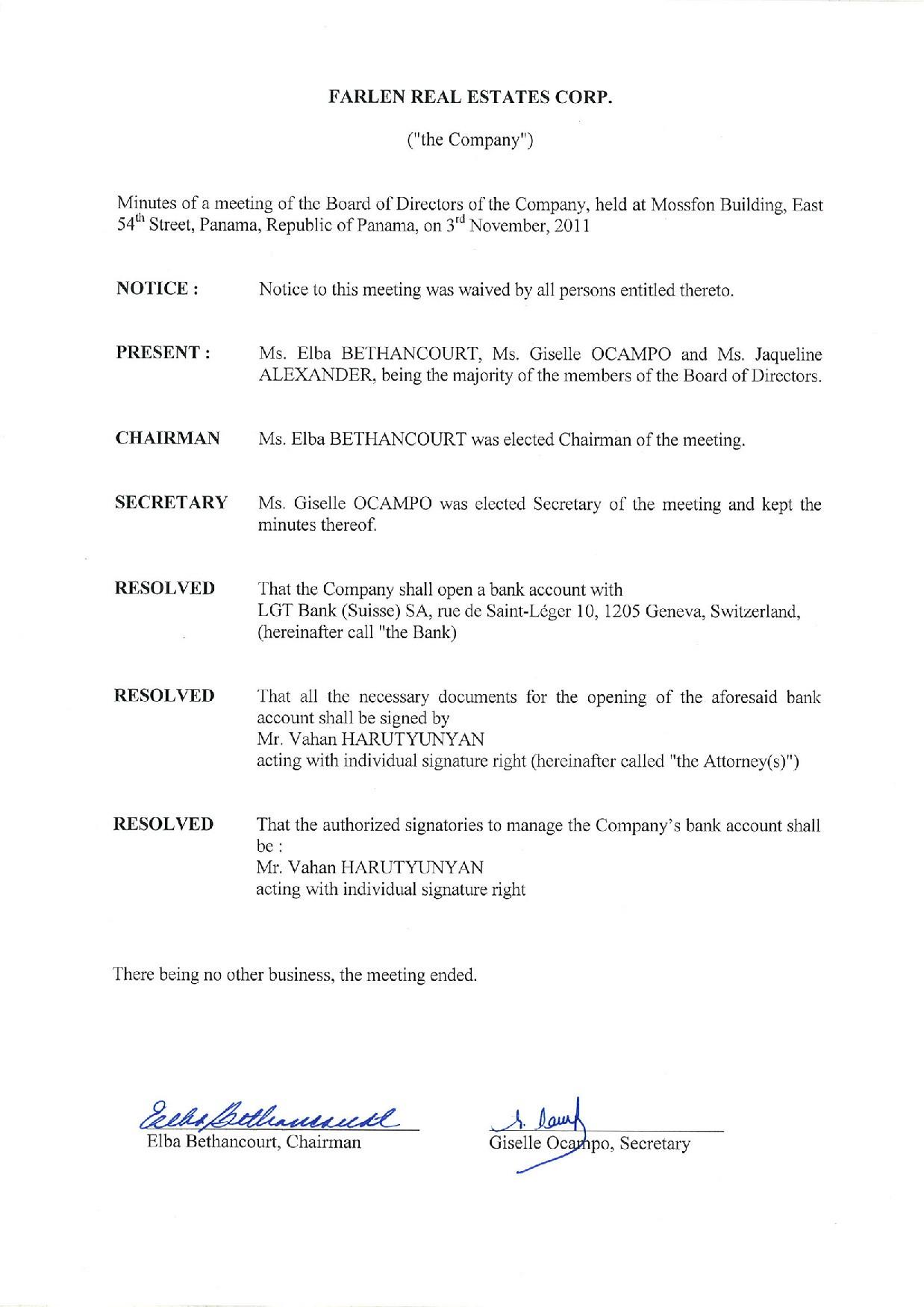 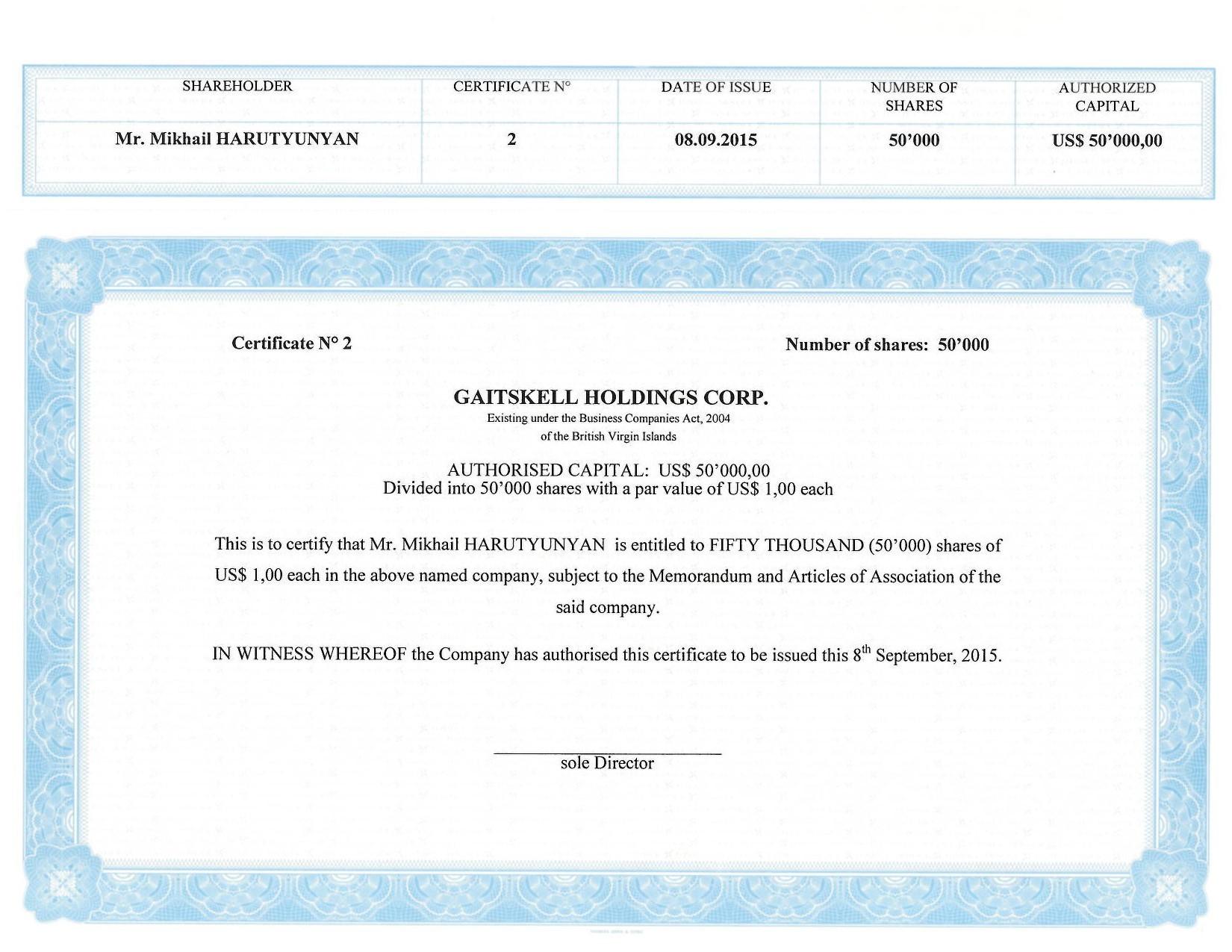 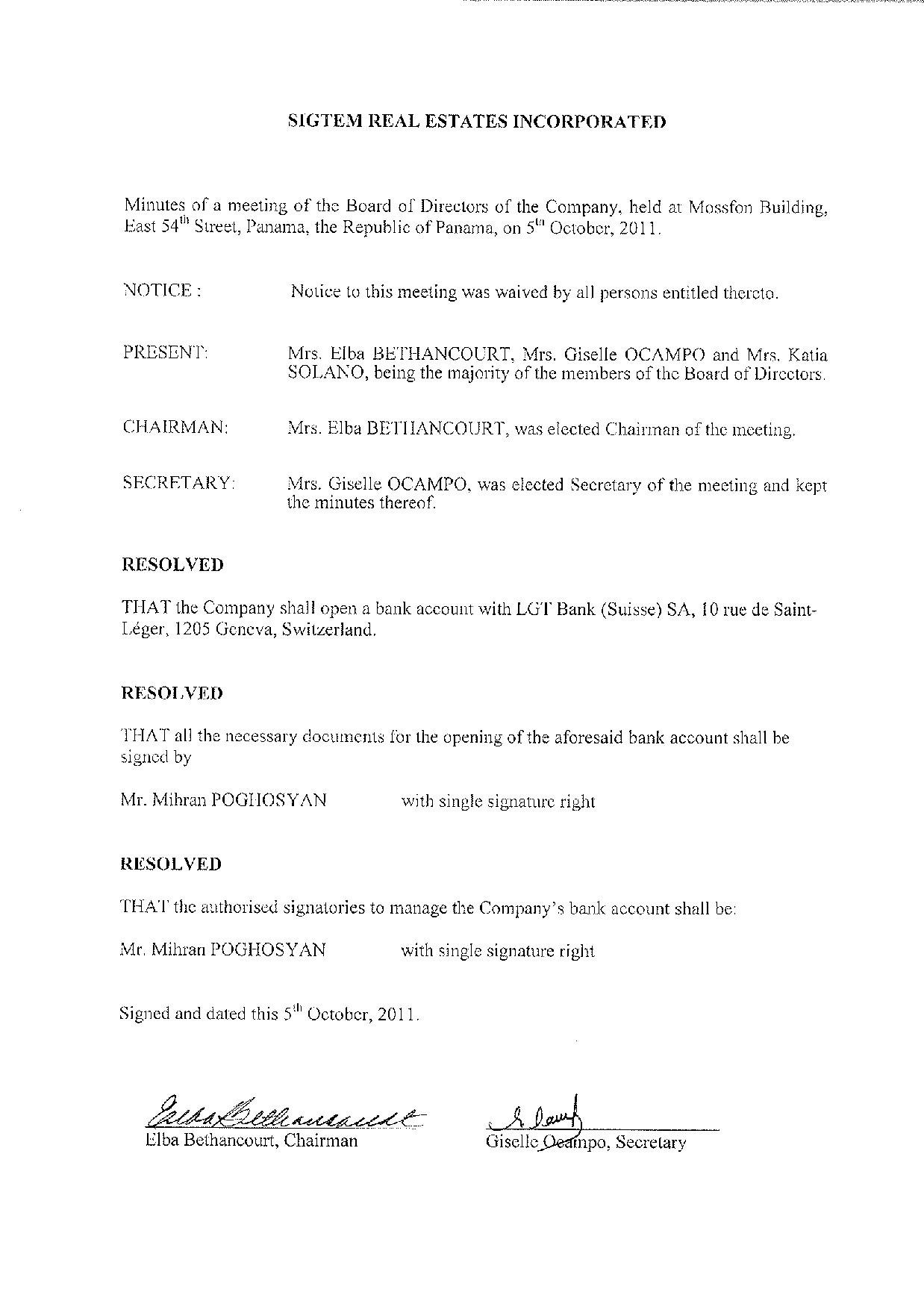 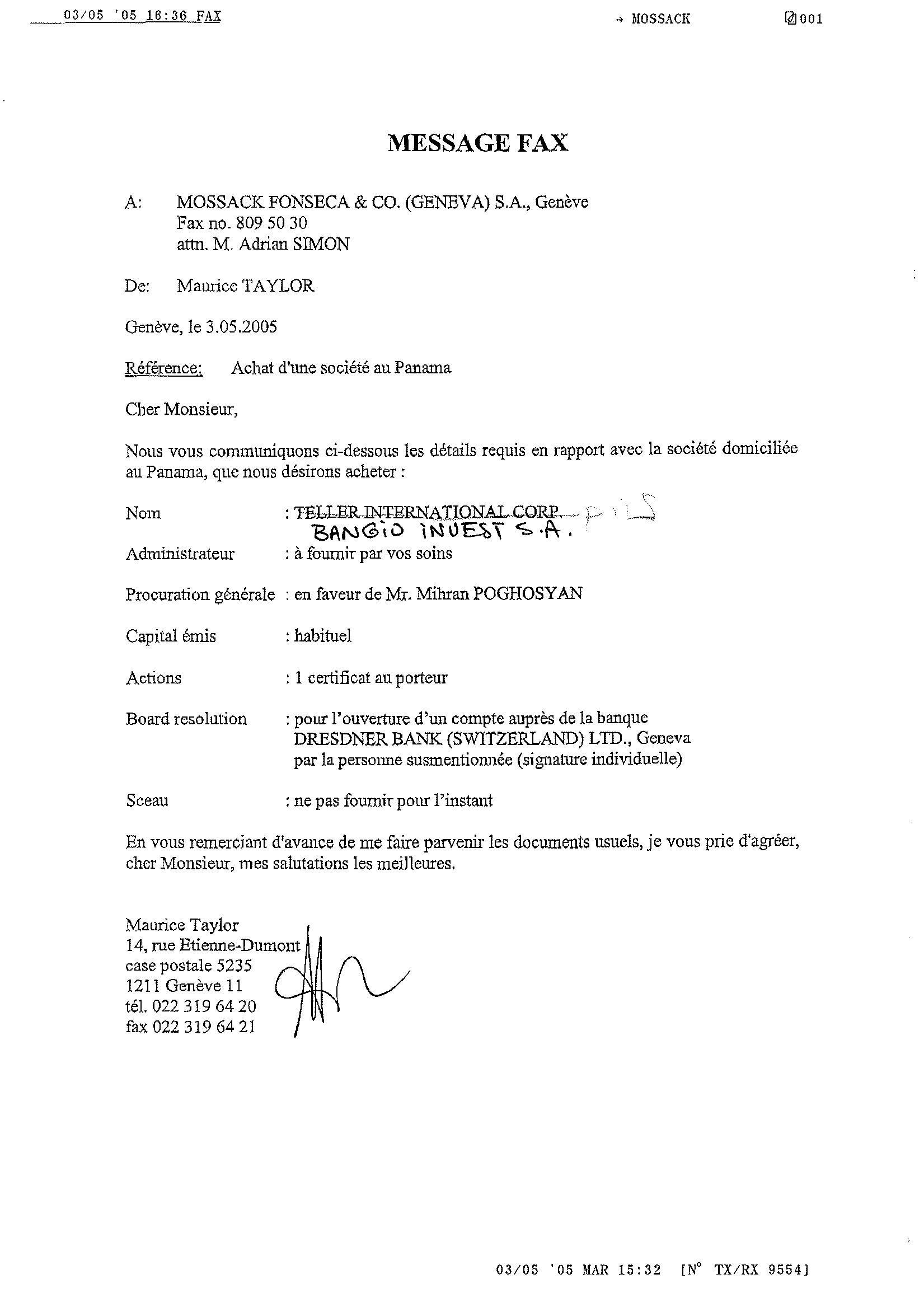