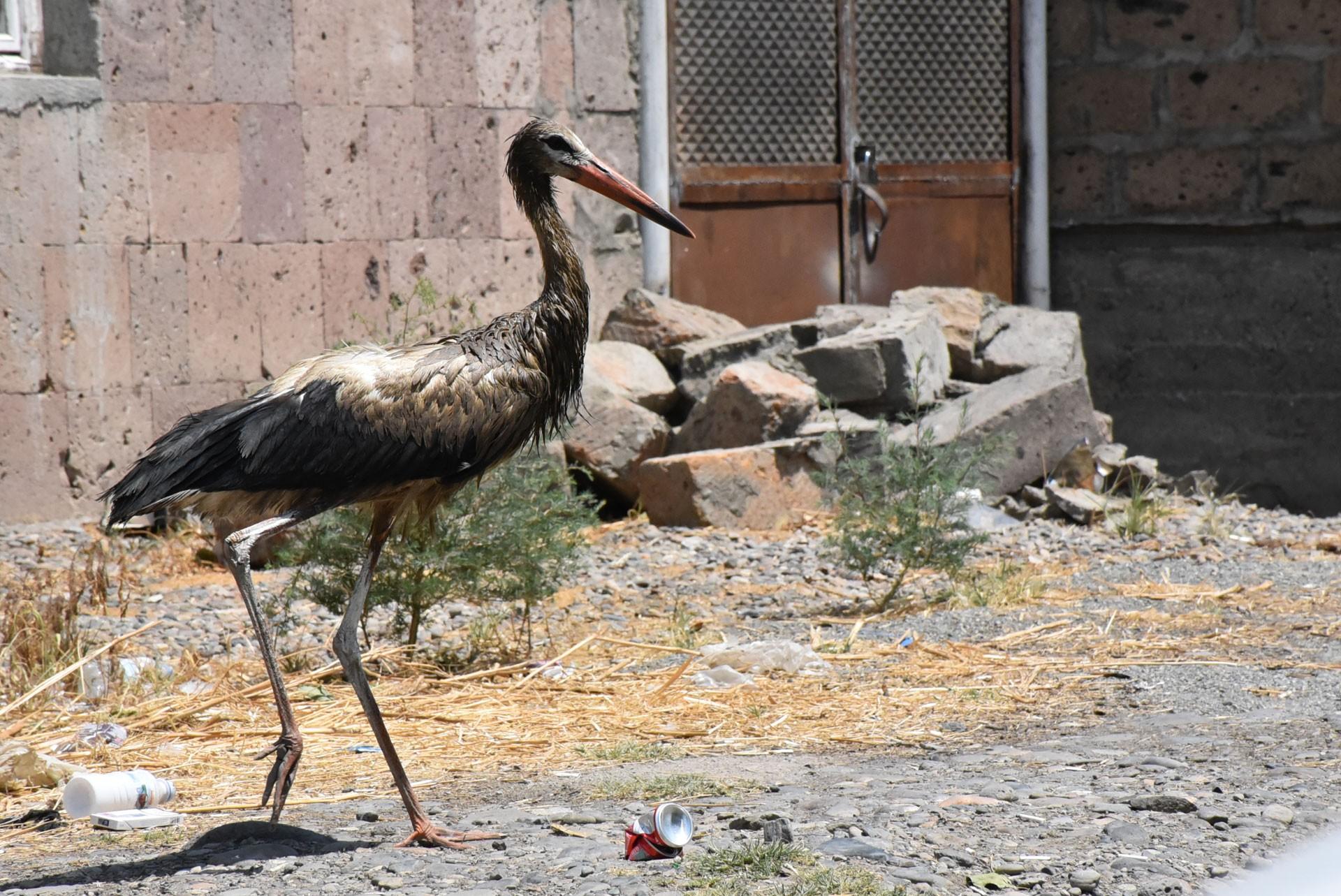 The birds were spotted along a section of the Hrazdan River, near the village of Dashtavan in Armenia’s Ararat Province. 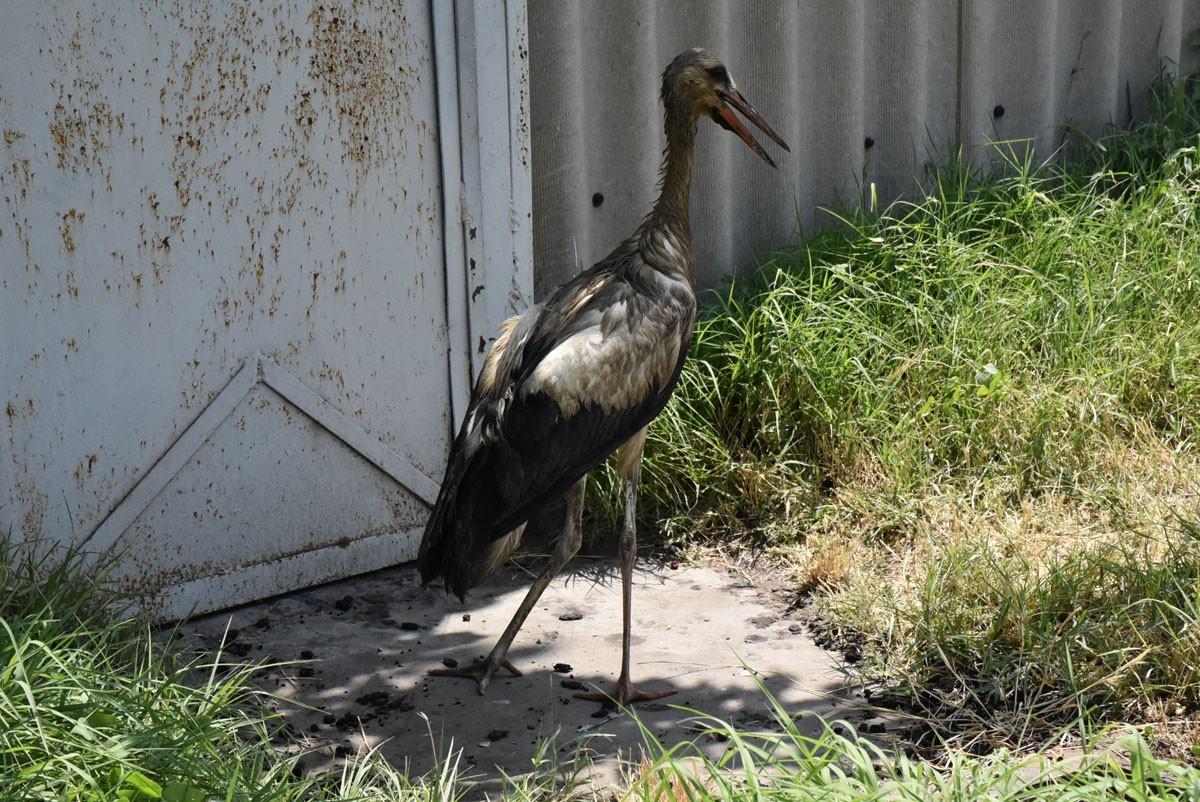 Water from the Hrazdan, which flows from Lake Sevan, is used to irrigate the country’s breadbasket, the Ararat Valley. The blackened storks, with their matted feathers and gaunt faces, are visible indicators that the river faces a number of environmental problems.

A group of Hetq reporters visited the area in an attempt to track down the source of the pollutants that nearly killed the storks.

One stork we spotted kept flapping its wings in a vain attempt to fly. Wobbling around, it looked like the bird had injured one of its legs.

Boys hanging out at the hairdresser near the Zorak-Dashtavan crossroad said they did not know how long the bird had been there. They told us that Dashtavan's storks have been oil-soaked and weak for the past two or three months and that the chicks aren’t able to fly out of the nest, falling to the ground instead.  when their flying eggs suddenly sink and fall. One of the boys said that the storks may have intestinal diseases because they feed from the Hrazdan River, a likely source of this or that virus.

Right now, the most important thing is to feed the storks

On July 20, Lyuba Balyan, a research fellow at the Zoology and Hydroecology Research Center, reported on his Facebook page that several days ago, employees of the Environmental and Mining Inspectorate brought  a stork to the Zoological Institute. The bird was completely covered with a thick layer of dirt and clay and was unable to fly.

An examination of the bird’s feathers revealed that the oil wasn’t industrial but rather a vegetable or animal-based variety used in the production of foodstuffs.

"We tried to clean a couple of feathers, but only a commercial soap solvent did the trick, which is not a good signal," said Balyan.

In a conversation with Hetq, the researcher says that if a bird cannot fly, then it cannot hunt or feed itself. If the bird has chicks, they will also die from hunger. Balyan says this is the biggest problem, because not only are the mature birds getting weaker, but the chicks are being ignored by the parents. This can lead to a local stork population decline.

Representatives of the Center for Zoology and Hydroecology and the Union for the Protection of Birds of Armenia toured the Ararat Valley, from the Armash fish farms to the town of Masis town and the village  of Sis, visiting communities along the Hrazdan where storks traditionally nest.

The specialists found a large number of oil-soaked storks in the village of Hovtashen, in the Artashat region.

On July 21, on its Facebook page, the Environmental and Mining Inspectorate reported that the search for the source of the pollutants in the Hovtashen community is ongoing and that volunteers, in conjunction with inspectorate staffers, are cleaning the impacted storks.

The Ministry of the Environment says it is following the issue closely. 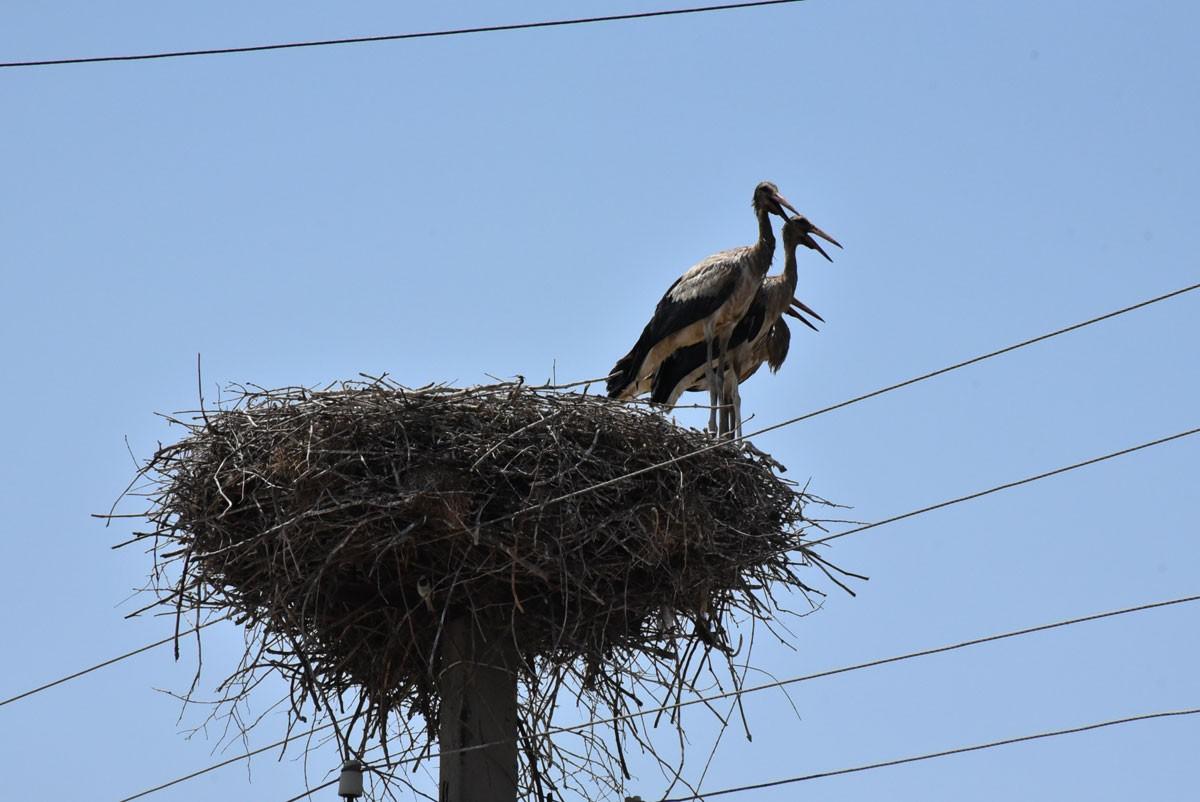 Balyan stresses that a professional approach should be taken while helping the birds, adding that zoologists need to be supervising the entire cleaning process.

Balyan says that a group led by Mamikon Ghasabyan, Head of the Laboratory of Vertebrate Animals Zoological Institute, visited Hovtashen again yesterday. He says they found around thirty birds in need of immediate assistance and feeding.

"The mayor said he needs permission to feed the birds because the stork is a wild bird. Is there a clause in the law that will allow us to transport the birds and feed them? We don’t know, nor have we received any clarification. The important thing is to set up a feeding station, identify the source of pollution, and how to clean the birds,” says Balyan, adding that they have contacted their international partners and drafted several professional approaches to the problem.

The Hrazdan River has become a sewer

Hovtashen village is not the only place where storks are to be found blackened, greasy and hungry. We saw storks in the same condition in the villages of  Dashtavan, Ghukasavan and  Zorak. 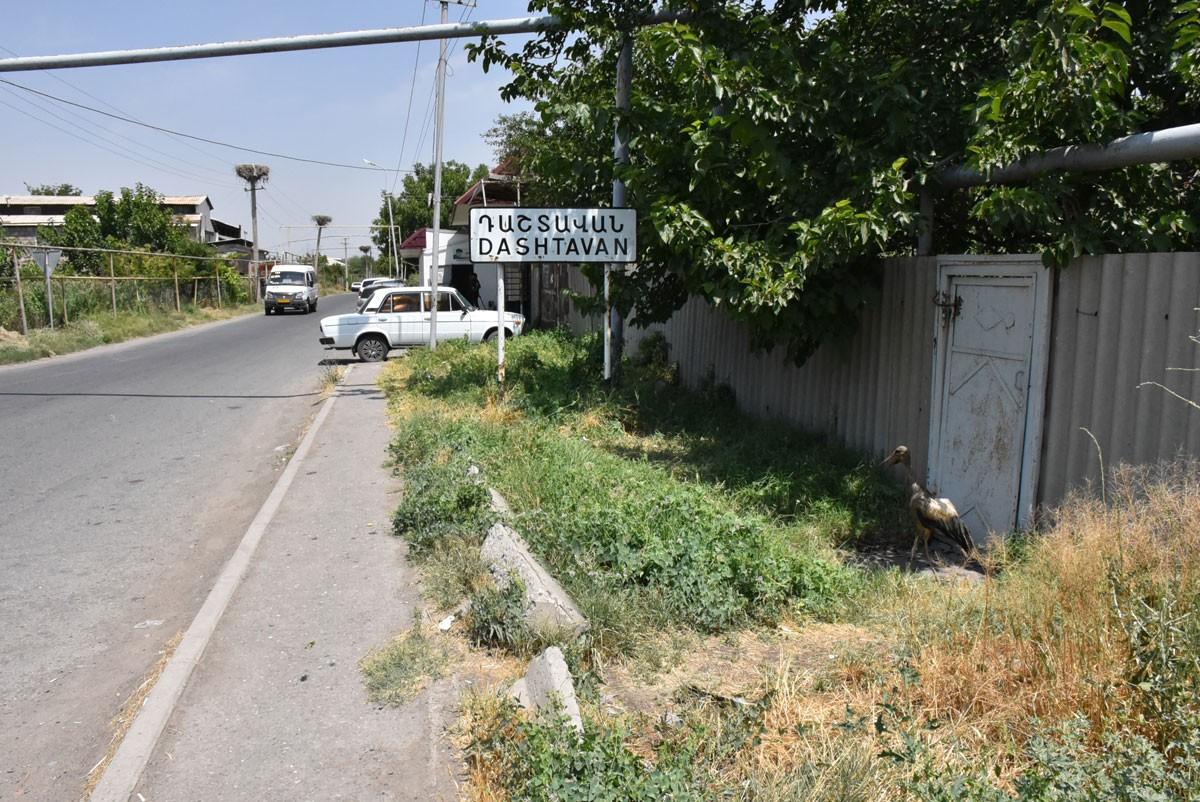 Dashtavan resident Artashes Kocharyan says the storks swim in the Hrazdan, blacken and die. He says that every kind of pollutant winds up in the river.

Vasil Khanaghyan, a fellow villager, asks us if we didn’t  smell something on the way to the Dashtavan.  He says that in addition to the Hrazdan being dumped with  waste water from Yerevan's Wastewater Treatment Plant (the station provides preliminary mechanical cleaning, and the quality of the process is suspect), wastes from the local leather and sponge plants also flow into the river.

Dashtavan resident Gagik Torosyan points to two storks  standing in his yard. He says they’ve been there for the past three or four hours because they can’t fly.

Torosyan believes they are sick and that all the storks in the village look the same. .

He then points to a nest of storks on a telegraph pole near his house. "The storks never looked like this. They were whiter. Something’s not right.”

Dashtavan Razmik Muradyan believes that the local stork population has increased this year but that the birds have a problem hunting for food, noting that the river’s pollution greatly impacts the birds.

"The Hrazdan River resembles a sewer," says Muradyan, adding that some villagers irrigate their orchards with river water. He uses artesian well water.

Residents use polluted Hrazdan River water to irrigate their fields

Dashtavan Mayor Vardges Khanaghyan says it’s the first time residents have seen storks in such a state. He notes that the river might be the cause of the birds’ blackened exterior. 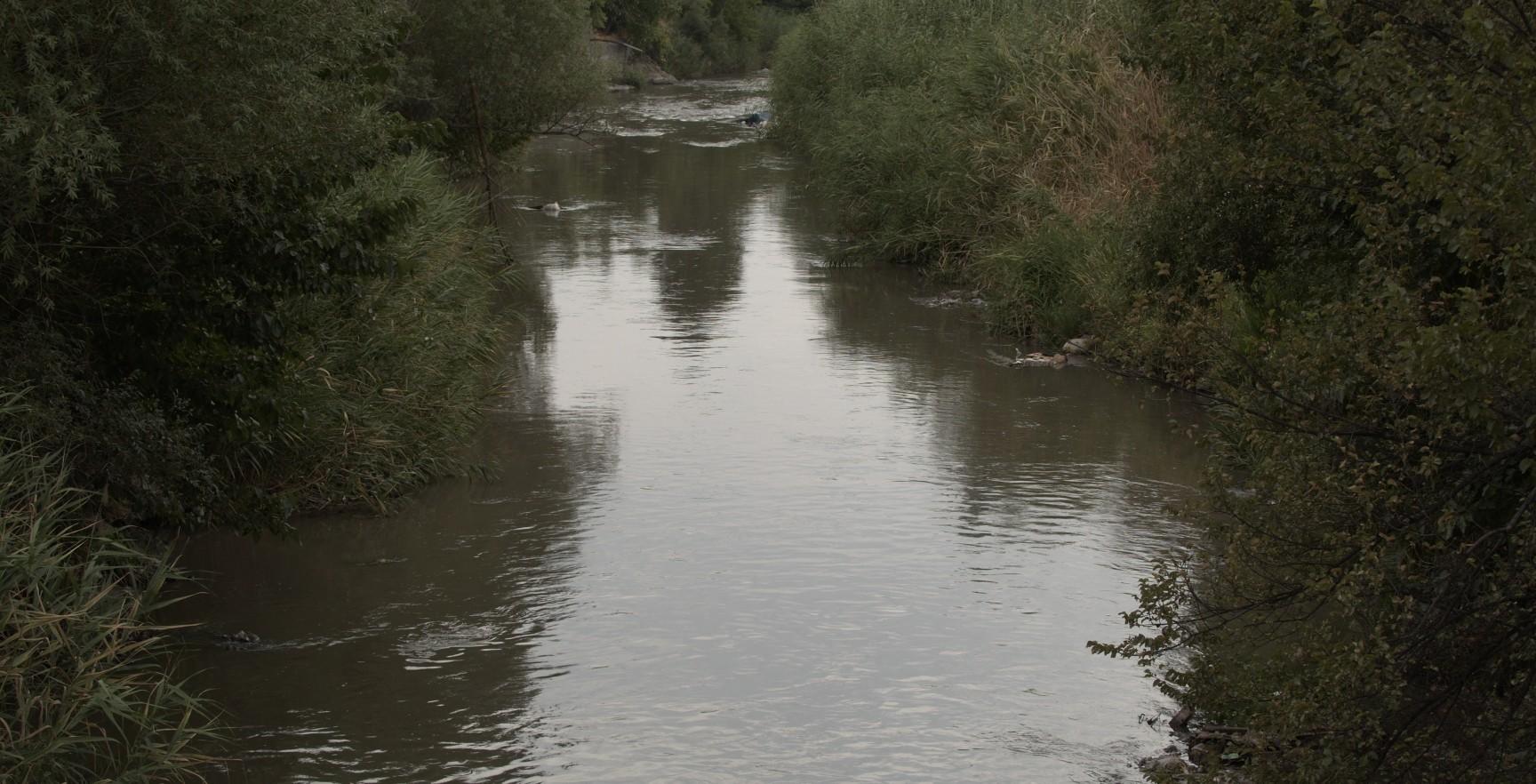 Khanaghyan says that the heads of seven communities in the Masis region (Getapnya, Geghanist, Norabats, Zorak, Ghukasavan, Dashtavan and Darakert) have raised the issue of the Hrazdan’s pollution, calling for the construction of a cleaning station would be built. Last year, the heads of seven villages sent a letter to the Governor of Ararat, who forwarded it to the Ministry of Environment. No action on the matter has been taken.

The Davtashen mayor says that the abovementioned villages mostly derive their irrigation water from the Hrazdan River even though some use artesian wells. Khanaghyan says that while we immediately see the effect of the pollutants on the storks, we’ll only see the effect on humans over time. 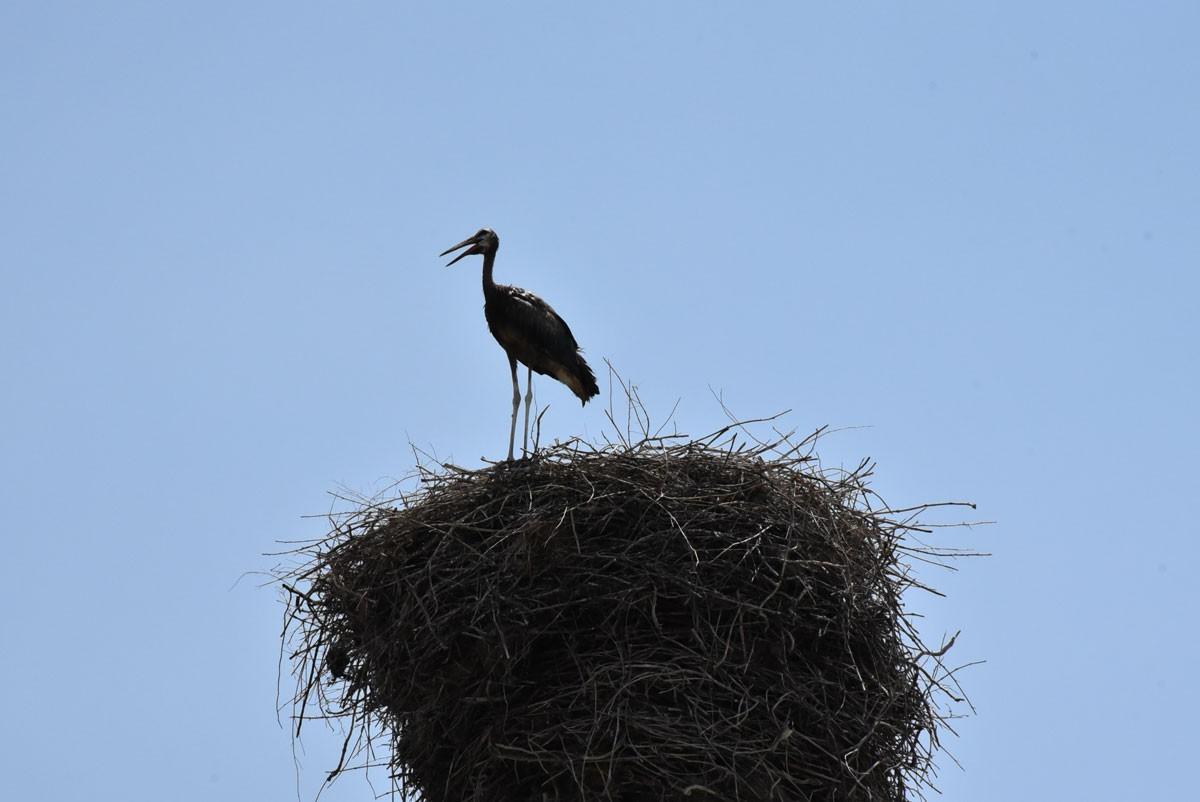 Zoological Institute research fellow Lyuba Balyan also stresses that the main reason for the current situation is the pollution of the Hrazdan River and that the government must play a role in its resolution.

She says the problem must be viewed in a wider criminal context and that attention must be paid to the flora and fauna in the area as a whole, to see what other species have been affected or are at risk. 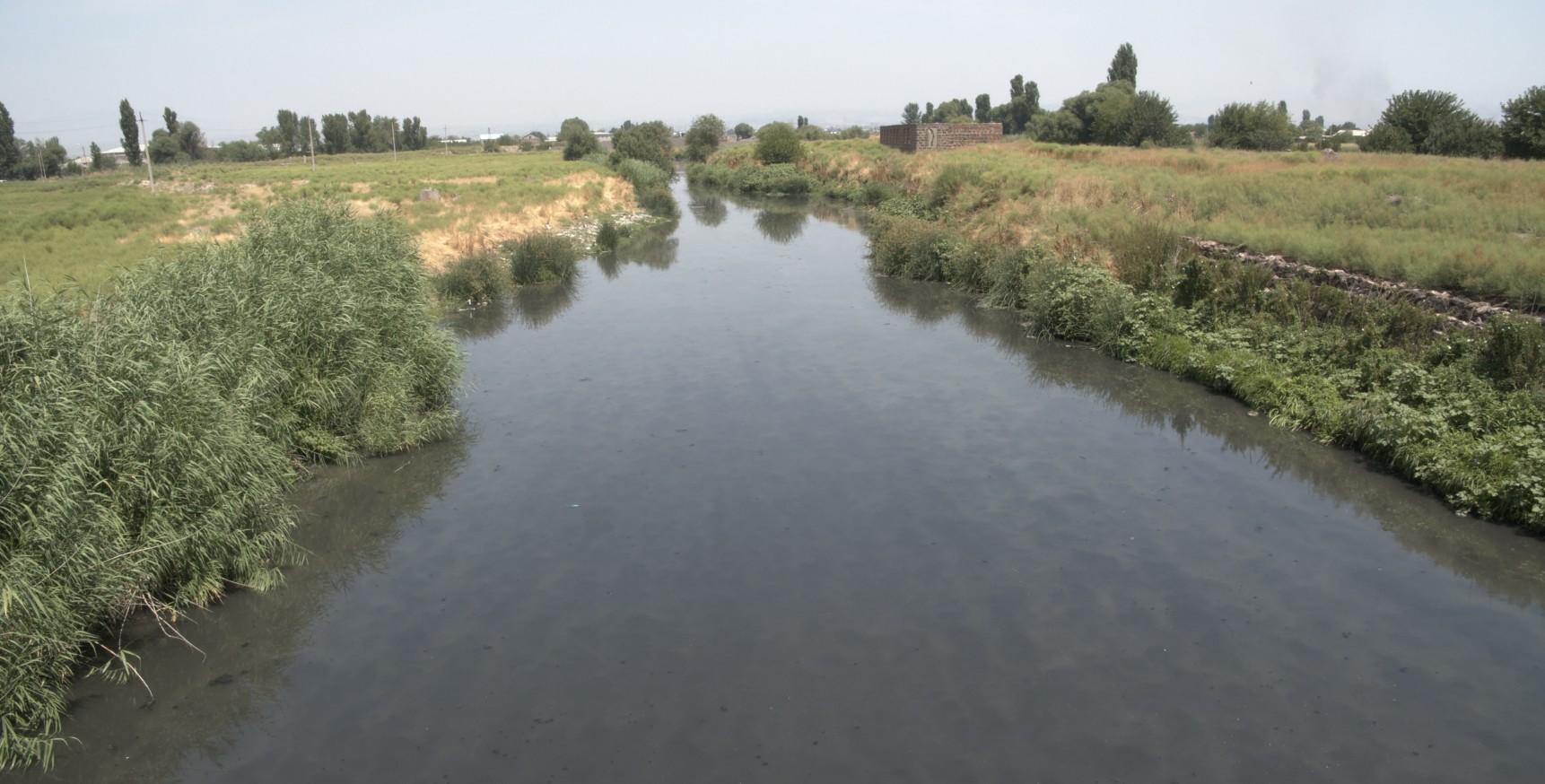 Darbnik-Dashtavan section of the Hrazdan River


In the Darbnik-Dashtavan section of the river, we spotted  black, jelly-like masses in the water were visible in the river, which spread when encountering a rough surface. In the villages of Getapnya, Geghanist and Ghukasavan, the stench of the river was overwhelming.