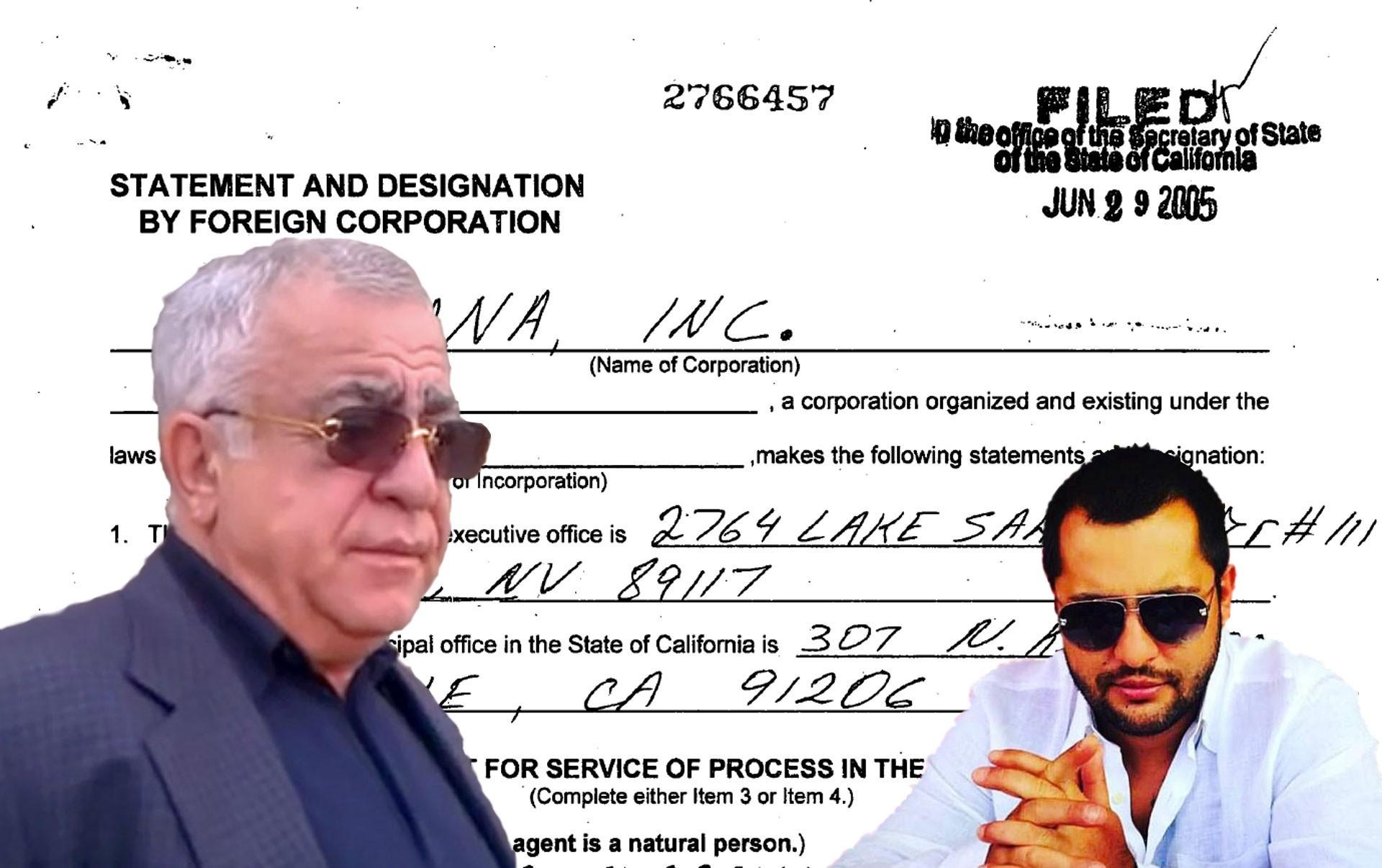 Alexander Sargsyan, who served as a member of the Armenian National Assembly from 2003-2012, thus violated the 1995 Armenian constitution that was in effect at the time.

The 1995 constitution states: "A deputy may not hold any other public office or perform any paid work other than scientific, pedagogical and creative work."

Furthermore, the Constitution that came into force at the end of 2005 stated: "A deputy may not engage in entrepreneurial activity, hold a position in state or local government or commercial organizations, perform other paid work other than scientific, pedagogical and creative work."

Alexander Sargsyan has ignored this constitutional requirement for years.

In May 2005, he founded a company called Hana (probably a mix of his sons’ names-Hayk and Narek. (Sargsyan also founded companies with the same name in Armenia.)

In October 2005, Alexander Sargsyan, in the Kotayk village of Balahovit (where he was registered at the time), founded Hana M.E.K. Ltd., a billboard business. According to State Revenue Committee data, the company has suspended operations.

In September 2011, Sargsyan's younger son, Narek Sargsyan, founded Hana-Trans LLC in Balahovit. The field of activity was inter-regional road freight transport. In February 2012, the government of the then Prime Minister Tigran Sargsyan granted the company of then MP Alexander Sargsyan a three-year VAT payment extension for the importation of 40 Scania lorries (total value - 1.9 billion drams) from Sweden to Armenia. According to the government, the investment program was as follows: Hana-Trans planned to transport coal from the Maghavuz region of Artsakh to the Vardenis railway link via the imported trucks. The coal would then be shipped to Yerevan via Hana-Group Company. The raw material would then be used by the Yerevan TPP CJSC as a water-carbon fuel, which would generate electricity. In October 2012, the government decided to sell the former building of the railway hotel in Vardenis to Hana-Trans. Thus, it was not accidental that the company changed its address to Vardenis. Narek Sargsyan was then replaced by his father as the sole owner. Currently, the company has suspended operations. According to the website of the Military Insurance Fund, in 2017-2018 the company had 21-24 employees. This differs from the original business plan that envisaged fifty employees earning an average of 180,000 drams monthly.

In December 2011, Hanaservice LLC was registered, the sole shareholder of which was Narek Sargsyan, who later transferred his stake to his father. The address is in Vardenis, where Hana-Trans is also listed. The company was engaged in vehicle maintenance and repair. It was thus serving Hana-Trans trucks. Hanaservice has suspended operations. According to Military Insurance Fund data for 2017-2018 Hanaservice had 4-8 employees.

In July 2012, Hana-Vard LLC was founded by Mher Bagratyan and Andranik Mkrtchyan. The company soon passed to Narek Sargsyan and then to Alexander Sargsyan. Like Hanaservice, it was involved in car maintenance and repair. The company, registered in Vardenis, was later liquidated.

Returning to Sargsyan family business in the U.S., Alexander Sargsyan founded Hana Corporation on May 5, 2005 in Nevada. According to U.S. documents, the office was in Las Vegas (2764 Lake Sahara Drive; an office building). The president, director, secretary and treasurer of the corporation with a charter capital of $ 75,000 was one man - Alexander Sargsyan (see below, source: Nevada Secretary of State's Office). 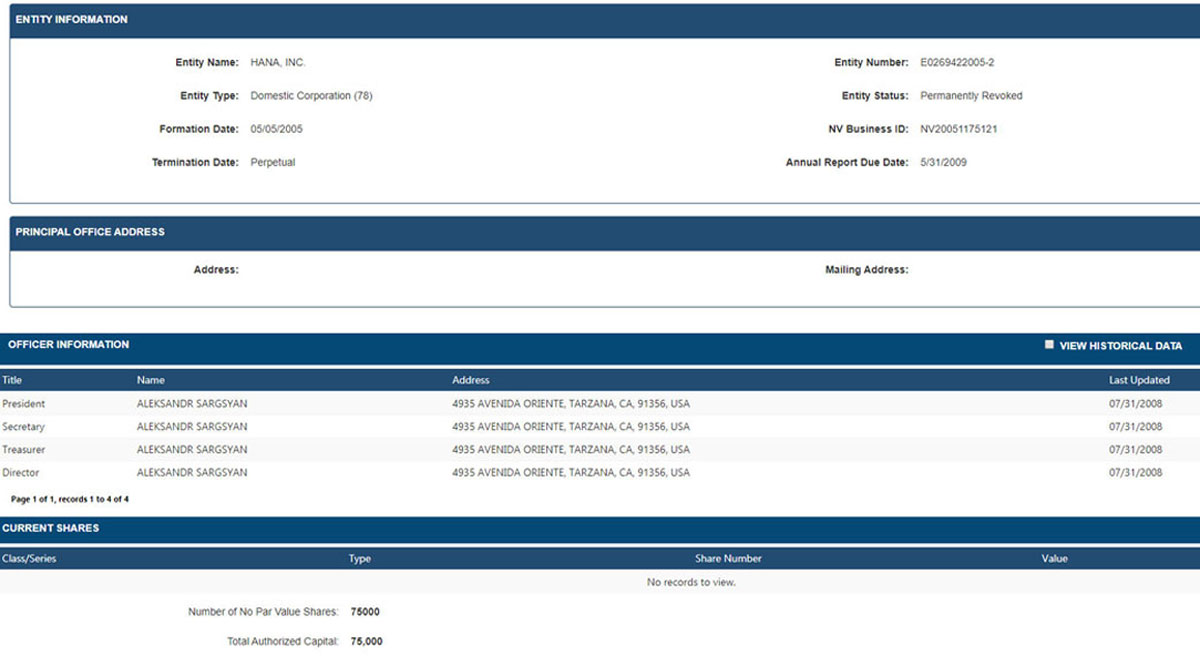 In the 2000s, when Alexander Sargsyan was a parliamentary deputy, the press in Armenia wrote that he had a construction business in the United States. He didn’t deny this. The Armenian constitution does not prohibit MPs from owning shares in a commercial organization, but it prohibits them from participating in company management and the daily running of the business. The documents show that Alexander Sargsyan was doing just that.

Under Nevada law, businesses must file a report every year while paying a state registration fee and licensing fees. There is a deadline for all this. If the enterprise misses the deadline for performing its duties, its registration is, so to speak, frozen (default). If nothing changes in the following 1 year, the registration is revoked. This status is temporary for up to 5 years. If no action is then taken by management, registration is permanently revoked. However, in all these cases it is possible to rehabilitate or "resuscitate" the enterprise, naturally paying the appropriate fees and penalties (there is also a dissolved option when the legal entity simply ceases to exist). Alexander Sargsyan's company Hana has not filed any reports since 2009 and has not made any payments. Its registration has permanently been revoked.

When it was operating, Hana opened branches in California.

Hana’s first branch was registered on June 29, 2005 in Glendale (307 N. Kenwood Street, Glendale, CA - residential building). This same address was also mentioned as the president of the corporation A. Sargsyan's California Address (see below).

It is no accident that the California Hana company moved from Glendale to Tarzana afterwards. In one of the 2014 documents, the type of activity of the branch notes the leasing of real estate. Alexandr Sargsyan is listed as executive director, secretary and financial director. The agent taking care of the company’s paperwork with state agencies was Ruzanna Manana Aloyan. In August 2014, the Hana branch changed its name to Hanalek (Hayk + Narek + Alexander). In August 2019 filed “statement of information”, Alexander Sargsyan is listed as Hanalek’s chief executive and chief financial director. The secretary was Vahan Harutyunyan and the agent was Ruzanna Aloyan. Everyone's contact address was that of Sargsyan's house in Tarzana (see below).

Note, however, that before submitting this 2019 report, Alexander Sargsyan had sold his house on June 19. Hanalek Corporation still operates.

Nevada's second branch of the Hana Corporation, Alek Construction, was registered in California on March 28, 2008. Although A. Sargsyan then had a home in Tarzana, the new venture was first registered in the neighboring Ensino district (16830 Ventura Boulevard, Encino, CA - an office building). The 2009 report, however, included a change. The corporation had moved to Tarzana, Sargsyan's private house. A. Sargsyan was listed as the CEO, secretary and the chief financial director. As noted above, he had no right, as an MP, to be engaged in any commercial activity. The document below describes Alek Construction’s sphere of operation.

On November 2, 2015, this California branch of Hana Corporation voluntarily discontinued its operation (surrender).

On September 4, 2007, Armenian National Assembly Deputy Alexander Sargsyan founded a new company in California, Naha LLC, whose name was probably formed from the names of his sons (Narek + Hayk). The company is registered in Sargsyan's home in Tarzana. The type of business: investment in real estate (see below).

On April 6, 2009 Narek Sargsyan founded a corporation named Naha Import Export. The business of the company, registered at his father’s Tarzana house, is importing and exporting, but the markets aren’t specified in the documents. N. Sargsyan was the chief executive of Naha Import Export. The secretary was Karine Lida Arakelyan, and the financial director was Anna Garkavenko (the latter were residents of the Van Nuys district of Los Angeles).