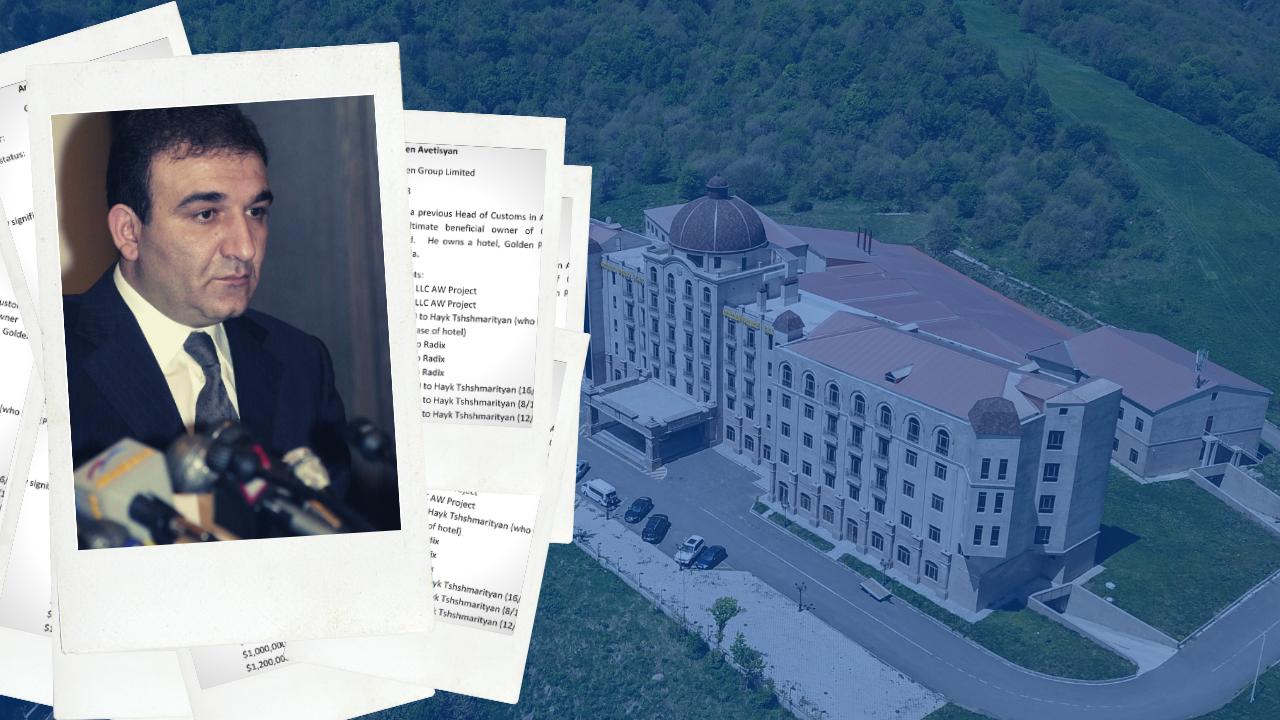 When the coronavirus hit Armenia in early March, those who had been exposed to the first confirmed patient were ushered to the mountain resort town of Tsaghkadzor and quarantined at the posh Golden Palace Hotel Resort & Spa.

The facility had stood empty ever since the family of Armen Avetisyan, the country’s former head of customs, gave it to the state in 2019.

At the time, Avetisyan was being investigated for alleged money laundering and amassing part of his US$90 million hotel portfolio during his time as a public official, despite laws forbidding him from business dealings while in office. But just weeks after the state accepted his family’s gift, worth over $15 million, the probe against him was dropped. 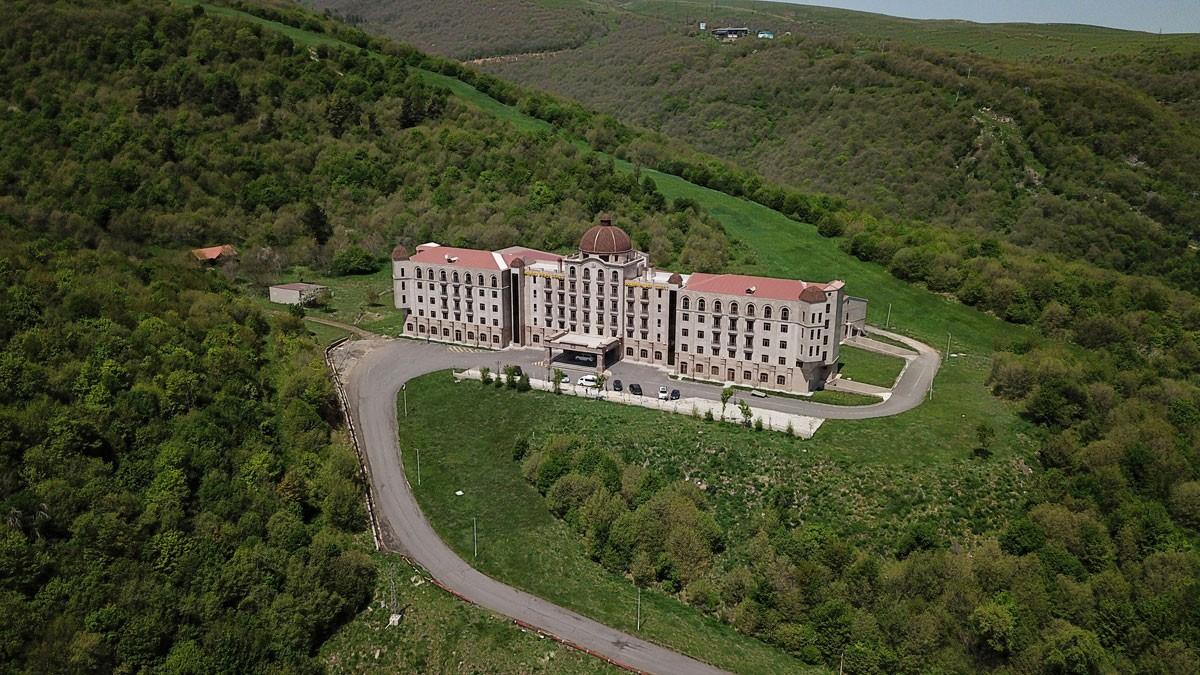 The Golden Palace Hotel Resort & Spa in the mountain resort town of Tsaghkadzor, where Armenia quarantined people exposed to coronavirus. The hotel was given to the state in 2019 by the family of an ex-customs chief being investigated for money laundering.

Avetisyan, who left his top position with customs in 2008, came under suspicion as part of an anti-corruption campaign launched by Armenia’s new government, after it was swept to power by the peaceful Velvet Revolution in 2018.

Now a leak of bank documents analyzed by OCCRP and its Armenian member center, Hetq, sheds new light on his family’s assets. Records and emails from Cayman National Bank on the Isle of Man, a British Crown dependency in the Irish Sea, show Avetisyan claimed to have 3 million British pounds in a Cypriot bank account, and to earn at least $1 million a year from his Armenian businesses when he opened an account at Cayman National in 2012.

Cayman National flagged the account belonging to the Avetisyans’ company internally as early as 2014 over concerns they contained funds “possibly from a corrupt source.” But despite their worries, the account stayed open for four more years, and more than $10 million passed through it. The bulk of that money was transferred to Avetisyan’s brother-in-law, who was once a deputy minister in Armenia.

Last year the bank filed a suspicious activity report following a request for information from the financial regulator on the Isle of Man, where the account was based.

Armenian investigators told Hetq they were unaware of the offshore account, but were adamant the probe against him was dropped for legal reasons.

Armen Avetisyan’s company, Golden Group Limited, was flagged as a high-risk client from the time it opened an account at Cayman National in 2012.

The company was registered on the Isle of Man in January of that year. Publicly it was owned by a nominee company also based on the island, Dolmen Holdings Limited, but Avetisyan declared himself the ultimate beneficial owner.

When the account was opened, Avetisyan claimed his wealth came from his hotel and furniture companies in Armenia, as well as his salary as a civil servant. He detailed how his family developed their first 5-star hotel in 2005, when he was a public official, and was now generating annual profits of around $1 million from his businesses. He also claimed to have 3 million British pounds in an account in Cyprus, which he was ready to transfer to the Isle of Man.

Based on public information about civil service pay scales in Armenia, Avetisyan would have been earning around $1,350 a month during his last year in office.

In 2014, an internal Cayman National report said the accounts should be closely monitored “in light of large and frequent deposits made by Avetisyan into [a] Golden Group account – funds possibly from a corrupt source.” 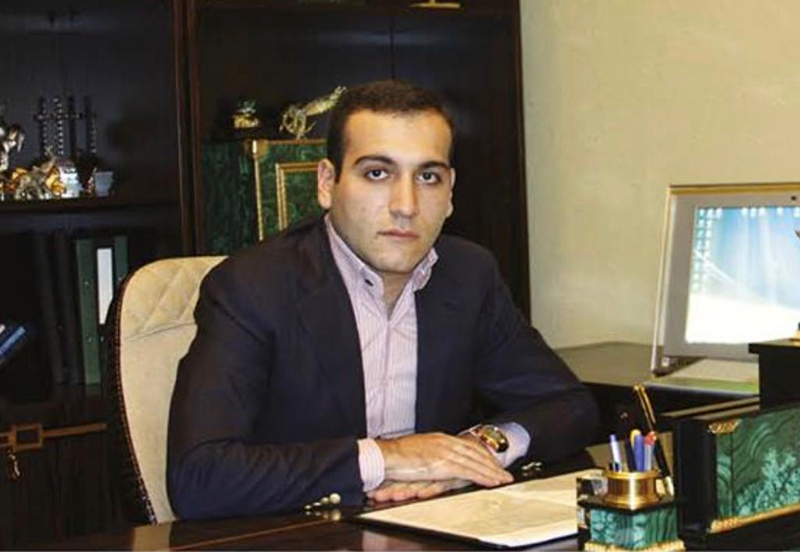 Just before the takeover, Armen Avetisyan officially turned the company over to his 22-year-old son, Artashes Avetisyan.

Investigators at Armenia’s National Security Services (NSS) alleged Avetisyan used Riverhill Holdings to pretend that the first of his Golden Palace hotels was financed by foreign investment. In fact, they claimed in a 2018 report, the hotel built in Yerevan’s Victory Park in 2005 — now branded as Radisson Blu Hotel Yerevan — was paid for largely in cash by Avetisyan and unnamed associates.

What’s more, the NSS said Avetisyan had personally overseen its construction and even used his official position as chairman of the State Customs Committee to resolve problems with the development.

“In order to make the fact of the hotel construction with foreign investments more convincing, in 2005, during the opening ceremony of the hotel, a Lebanese citizen was introduced as a foreign investor,” investigators said in the preliminary findings of the NSS probe into Avetisyan, released in October 2018.

In reality, they wrote in the report, the Lebanese man “had no connection to that company and for some time worked in the same hotel as director.” 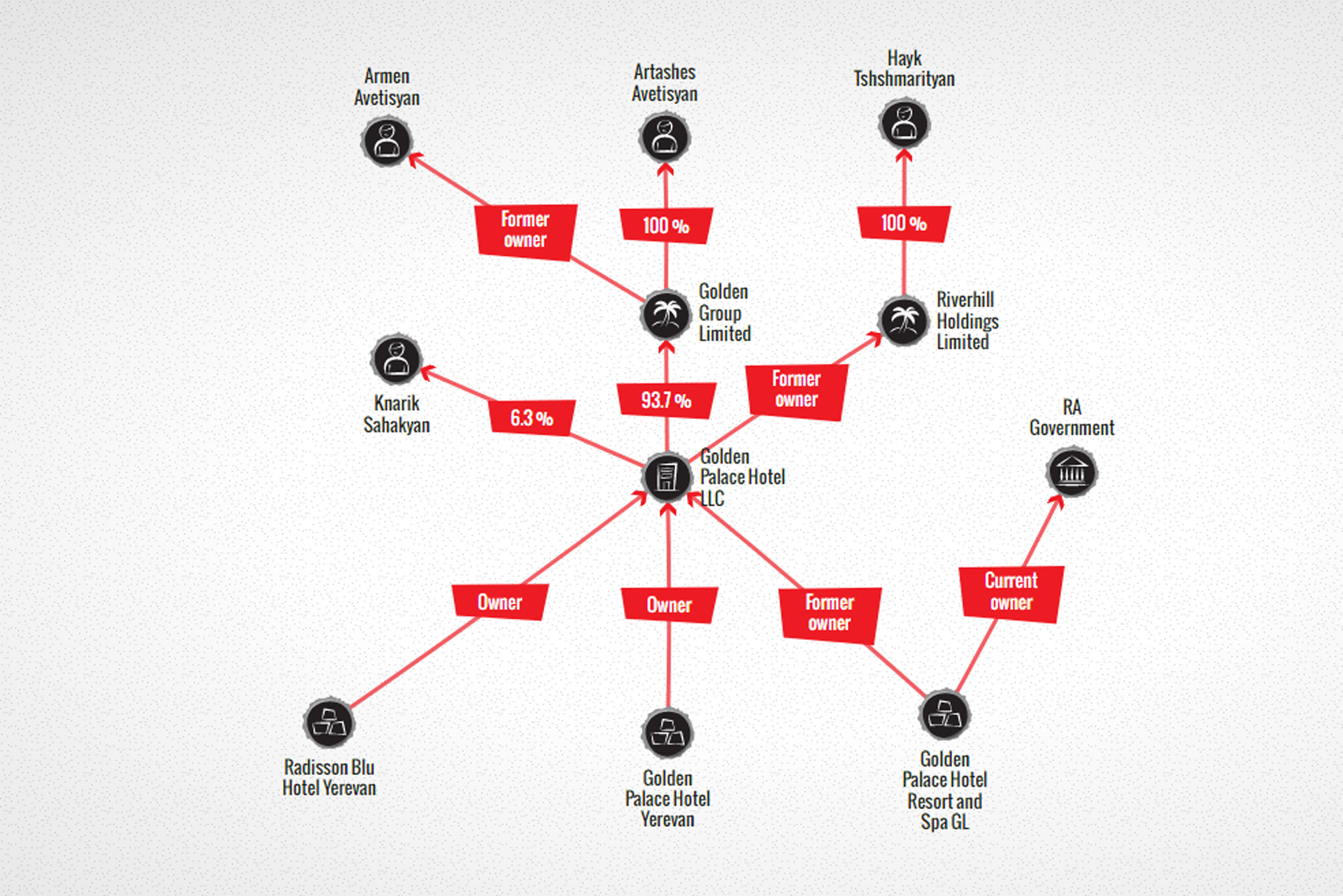 Not long after the opening ceremony for the first hotel, which was attended by then-President Robert Kocharyan, Armenian press outed Avetisyan’s brother-in-law, Hayk Tshshmarityan, then Deputy Minister of Transport and Communication, as the official owner of the Cypriot firm, Riverhill Holdings Ltd. He resigned from his post following the revelations.

But Avetisyan remained unscathed for another few years. He was dismissed from his position as head of customs without explanation in 2008, and he would go on to secretly build his second hotel, the Golden Palace Hotel Resort & Spa in Tsaghkadzor. The opening ceremony was held in March 2013, with then-President Serzh Sargsyan in attendance. 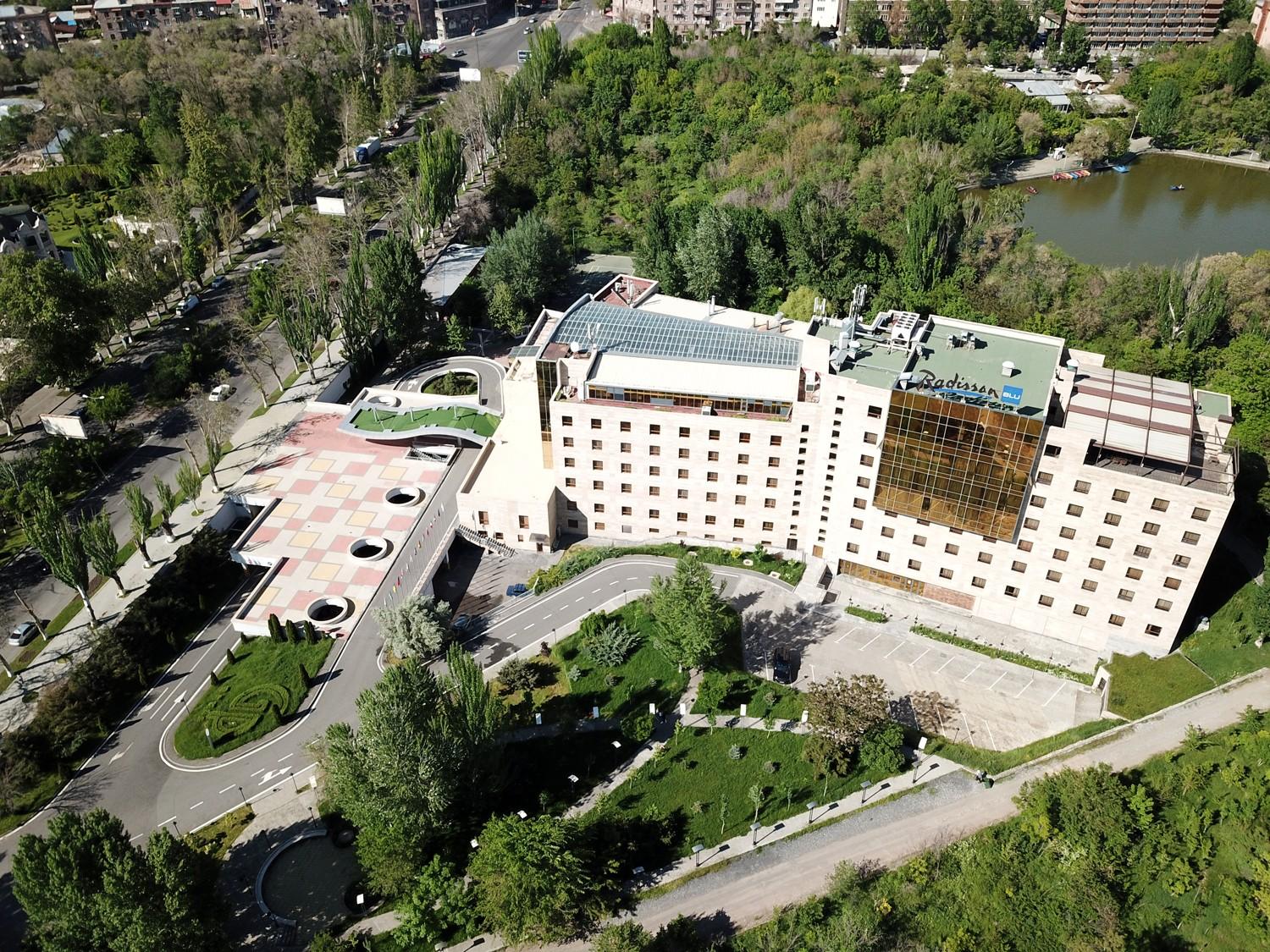 The Radisson Blu Hotel in Yerevan, Armenia’s capital, built by former customs chief Armen Avetisyan. Armenian investigators found that he had used a Cypriot company to pretend that it had been financed by a foreign investor.

It was not until July 2018 that Avetisyan was designated as an “unacceptable risk” by Cayman National.

In an internal memo, Managing Director Nigel Gautrey warned the bank’s Compliance and Risk Committee that Armenia’s former head of customs presented a “material” risk to the company.

“This is an ongoing PEP relationship where there are doubts in my view about the legitimacy of the original beneficial owner’s wealth, given his dismissal from public office due to corruption,” wrote Gautrey, citing an allegation that had been aired in the media but was never substantiated.

“Whilst there is no evidence of any wrong doing [sic] via Golden Group Limited the reputational risk of the Bank is material,” said Gautry. He added that, while there were no allegations of wrongdoing on the part of Artashes Avetisyan, the son and beneficial owner of the company, “it is clear that Golden Group Limited and its resort/hotel interests remain ‘family businesses’.”

The bank sent the client a 30-day account closing notice, with no explanation, and the relationship was terminated in September 2018.

Four months later, the bank received a request for information about the account from the Isle of Man’s Financial Intelligence Unit (FIU), which was acting on “received information.”

That’s when Cayman National’s compliance officers took another look at their former client and discovered press reports about the NSS investigation and the allegations that the Avetisyans’ hotels may have been built with illicit cash.

In a suspicious activity report filed to the FIU in July 2019, they wrote that they were “making this disclosure on the basis that laundered funds used in the acquiring and development of the Golden Palace Hotels may have been processed through our accounts.”

More than $10 million had passed through Golden Group’s British pound, euro, and US dollar accounts, statements show. Most of the deposits came from the hotels’ Armenian holding company, Golden Palace Hotel LLC, and Armen Avetisyan himself.

The largest recipient of funds from Golden Group’s US dollar account — $6.72 million — was Hayk Tshshmarityan, Avetisyan’s brother-in-law. Most of the funds appear to have originated from the Armenian firm Golden Palace Hotel LLC, which made a series of $1 million to $2 million deposits into the Isle of Man account, which it described as “prepayment for goods.” A few days later, sums of almost the same value would be transferred to Tshshmarityan.

The transactions, and what appeared to be Golden Group’s attempt to justify the movement with a $9.75 million loan agreement between Avetisyan and Tshshmarityan, left bankers confused and asking for further information. It is not clear from the leaked documents if these issues were resolved.

Cayman National said it does not comment on individual clients, but stated that “it is committed to maintaining the highest standards of conduct in all of its dealings.”

The bank said it “maintains stringent anti-money laundering and KYC procedures and is conscious at all times of its obligations with regard to politically connected individuals. [The bank] has always cooperated fully with the authorities in relation to suspicious transactions or criminal or regulatory investigations.”

Armen Avetisyan and Artashes Avetisyan declined via their lawyer to respond to detailed questions. Tshshmarityan, who has stayed out of the public eye since 2005, could not be reached for comment. 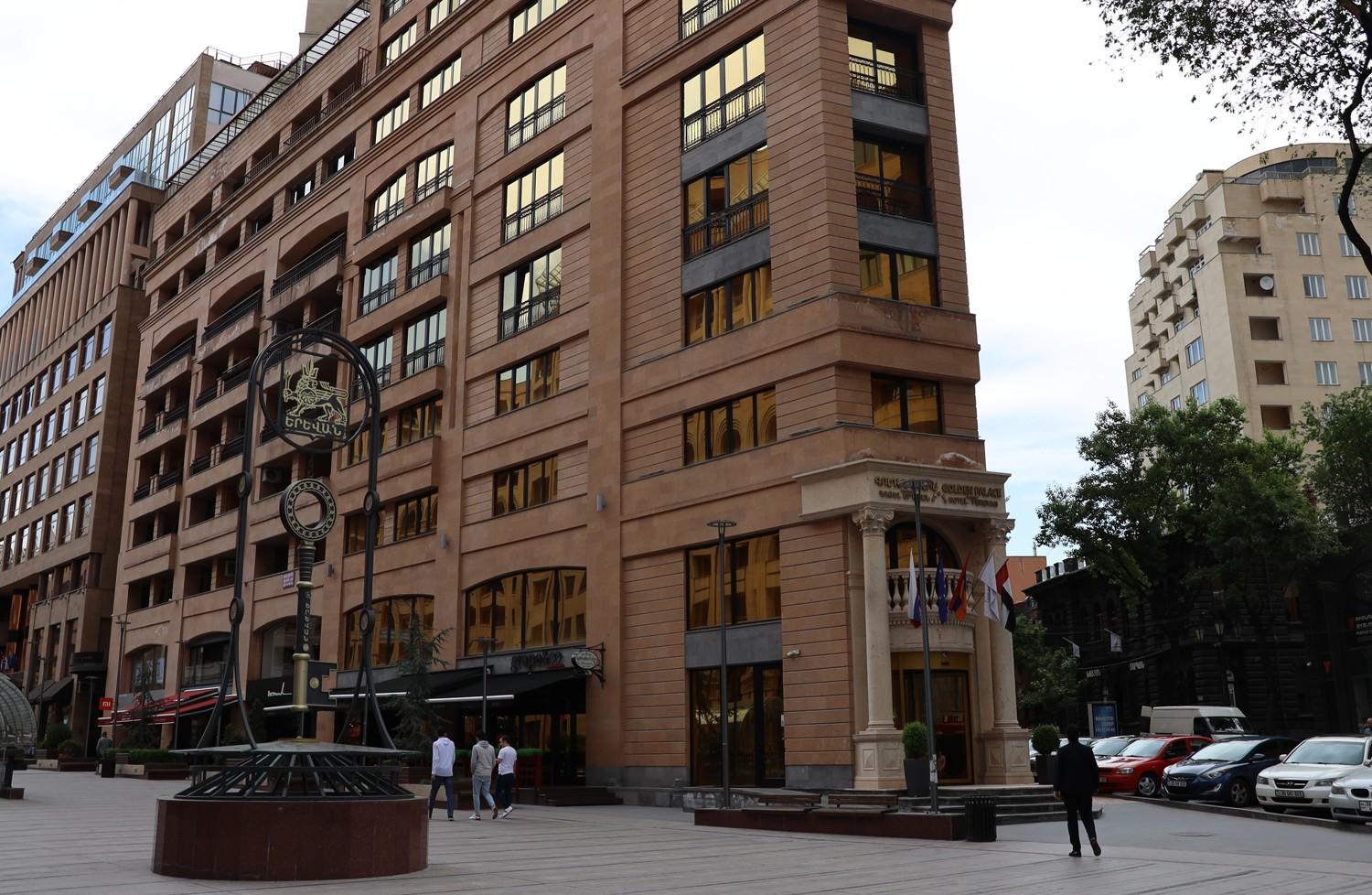 Weeks after the NSS released the summary of its investigation, Armenian Acting Prime Minister Nikol Pashinyan said the Avetisyans had offered to donate their second Golden Palace Hotel, in Tsaghkadzor, to the state. In September 2019, the government formally accepted the gift.

The hotel’s market value at the time was estimated at 7.5 billion Armenian Drams, or $15.8 million. The State Property Management Committee is currently trying to sell it at auction, but its first two attempts had no bidders, even after the government knocked down the starting price.

A few weeks after the family handed over the property, the case against Avetisyan was closed.

Several top Armenian officials, including the prime minister at the time and the head of the investigation, made comments implying that the gift of the hotel was linked to the end of the case.

“My opinion is that if the legislation allows, there is no need to jail people but give them opportunity to restore the harm,” then-NSS director Artur Vanetsyan told local media.

But the Prosecutor General’s Office insists that the case was dropped for legal reasons. In a statement to Hetq, the spokesperson said the office had terminated the money laundering case because it could not be proven, and the statute of limitations had expired on the other allegations.

Later — seemingly contradicting the office’s previous statement about the preliminary investigation — a spokesperson said Avetisyan had only ever been a witness in the case.

The Prosecutor General’s Office and the National Security Service also said they had no information about Avetisyan’s bank accounts in the Isle of Man.

In July 2019, Golden Group Ltd was struck from the Isle of Man’s company register. But to date, it remains the majority owner of Golden Palace Hotel LLC, according to Armenia’s State Register.

Armen Avestisyan’s mother, Knarik Sahakyan, has owned 6.3 percent since 2016 and his son, Artashes Avetisyan, has been general director since June 2018. Three years ago, the family opened their third venture, the Golden Palace Hotel, on Yerevan’s exclusive Northern Avenue.

Armen Avetisyan declined to answer questions, saying in a statement through his lawyers that law enforcement bodies “have carried out a comprehensive and detailed investigation into the issues raised by you, and official announcements have been disseminated.”

“I don’t see any point in providing additional information or comment.”