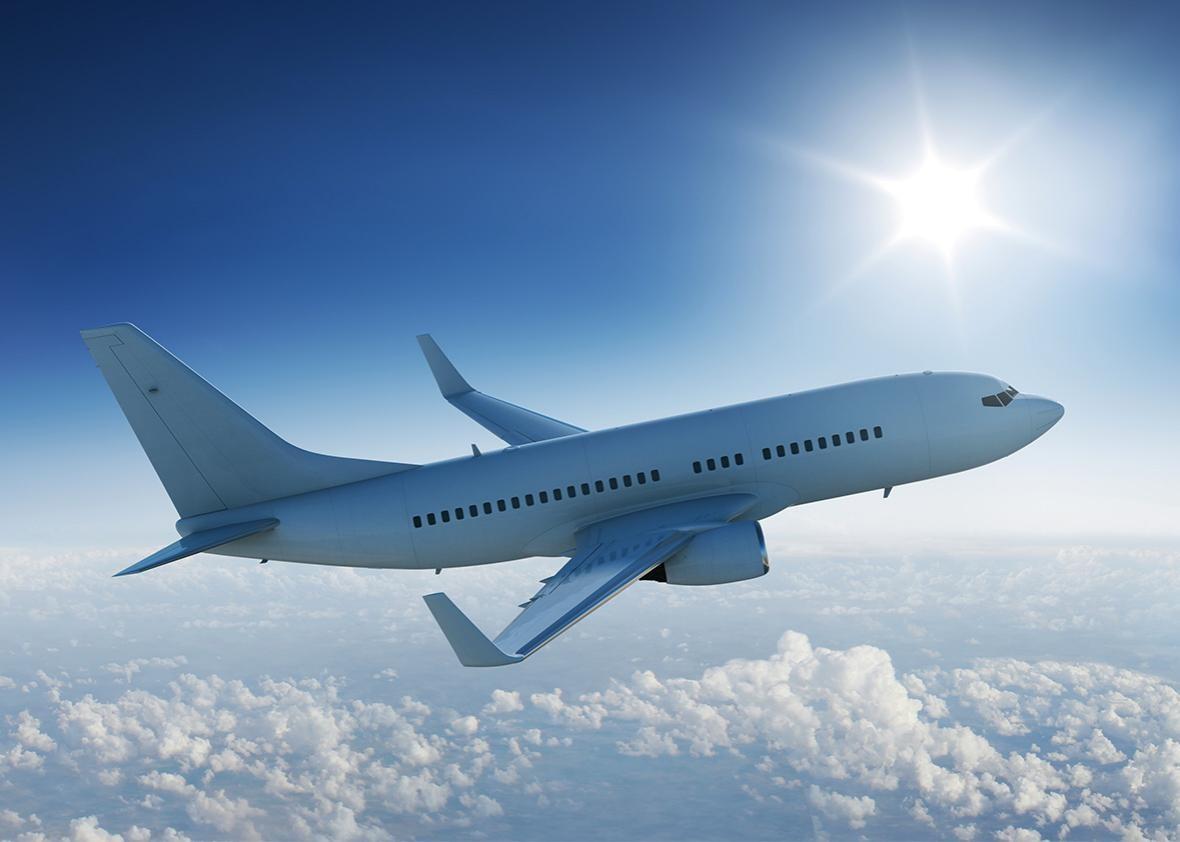 The European Commission today announced an updated EU Air Safety List, which for the first time includes Armenia with all its air carriers.

Make no mistake, this is a great step backwards for Armenia’s aviation authorities.

To fly in the airspace of the European Union, airlines of third countries must comply with European standards. To this end, the European Aviation Safety Agency (EASA) is conducting a study of the airlines that have applied, and accordingly, their entry into the EU is accepted or prohibited (blacklisted).

The blacklist, officially called the EU Air Safety List, consists of two appendices. Appendix A includes companies whose activities are completely banned in the EU. Appendix B includes access to specific aircraft.

Armenia has been included in Appendix A; thus, all Armenian air carriers have been banned from entering EU airspace.

Commissioner for Transport Adina Vălean said: "The EU Air Safety List should be used as an instrument that helps airlines and countries listed reassess and improve their flying standards. The decision to include the Armenian carriers on the EU Air Safety List has been made based on the unanimous opinion delivered by the Air Safety Committee. The Commission, with the assistance of the European Union Aviation Safety Agency, stands ready to cooperate and invest in Armenia to improve its aviation safety."

This problem arose last year when Armenia came under "heightened scrutiny" by the EU. The point was that EASA had identified shortcomings in its research at the RA Civil Aviation Committee, which, in fact, was crucial to the country's reputation.

Two Armenian airlines, Taron-Avia and Atlantis European Airways, applied to the EU to be recognized as a Third Country Operator TCO). In other words, these companies wanted to fly in the EU. (Airlines Armenia" already had such a status). Within the framework of the process of recognizing the mentioned two airlines as TCO, EASA in 2019 In July visited both them and the RA Civil Aviation Committee (CAC).

The following was mentioned in the official journal of the European Union: "Following that visit, EASA concluded that CAC had not systematically followed the established certification process when updating the Operations Specifications of these air carriers. Moreover, CAC could not provide assurances that
it was systematically assessing the Safety Management Systems, the continuing airworthiness systems, and the maintenance organisations of the air carriers that it had certified. Furthermore, CAC was lacking capacity to identify significant non-compliances with international safety standards by the air carriers.”

In November, a hearing of the EU Aviation Safety Committee (ASC) was convened and Armenia’s CAC was invited.

"During a hearing before the Air Safety Committee, which took place on 20 November 2019, CAC presented an overview of its organisation and structure, including details on the workforce assigned to its Airworthiness Department and Flight Operations Department. CAC provided details about the actions taken with respect to a number of air carriers registered in Armenia, about the training for the inspectors, and its future developments, including the plans dedicated to the recruitment of new inspectors. The Commission underlined its expectation that, as it is the case for all civil aviation authorities, CAC should only issue AOCs and accept aircraft on its registry if and when it has a full capability to oversee them.,” the EU wrote in its official journal.

As a result of the meeting, the EU Aviation Safety Committee expressed its intention to visit Armenia in cooperation with EASA and EU member states to check whether the CAC is implementing the certification and control of air carriers in accordance with international safety standards. The visit took place on February 3-7 of this year. The CAC and two carriers, Aircompany Armenia and Atlantis European Airways, were assessed (Taron-Avia voluntarily ceased operations in the fall of 2019). On March 6, the CAC and the operators received the results of the initial EASA assessment, which was not encouraging. The EASA temporarily suspended their current TCO status. On April 6, the RA Civil Aviation Committee was to send its opinion to finalize the report. Later, on May 12, an online discussion took place between the Armenian side (CAC and 6 airlines) and European agencies.

The Armenian side showed the European partners presentations on flight safety. For its part, the CAC urged the EASA to reconsider its decision on the two Armenian companies operating flights to EU airspace and to provide additional evidence to the carriers. The final report of the European side was to be submitted to the committee in late May.

In fact, the final decision is quite brutal for Armenia, and so far, the CAC has not responded. Hetq's source in the committee, in a conversation with us before this decision, expressed little hope that Armenia’s aviation sector would avoid being included in the "blacklist".

Only certain aircraft of Air Koryo (North Korea), Air Service Comores (Comoros Islands) and Iran Air (Iran) are allowed to enter EU airspace, i.e. the restriction is due to the aircraft by type: In other words, these are included in the EU's "blacklist" application "B". 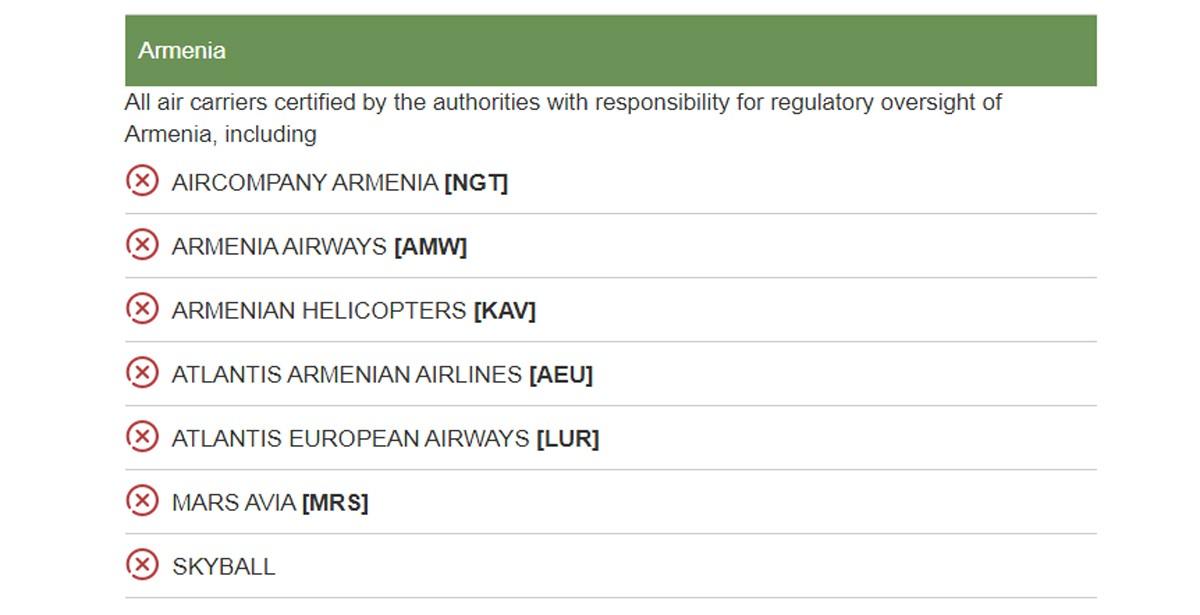 But the issue is not limited to these seven, as the EU has placed a ban on the entry of all airlines registered in Armenia. For example, if “x” airlines is registered in our country tomorrow, it will automatically appear in the EU's Air Safety List. Thus, the problem is not the company, but the aviation authorities that control it.

It should be noted that the Yerevan-Lyon-Yerevan flight of Aircompany Armenia took place today. Itwas not a commercial flight, but of a special nature. The point is that the suspension/termination of TCO status does not apply to non-regular (charter) flights performed for medical purposes (patient transfer), as well as for humanitarian or rescue purposes, the implementation of which is in the public interest.