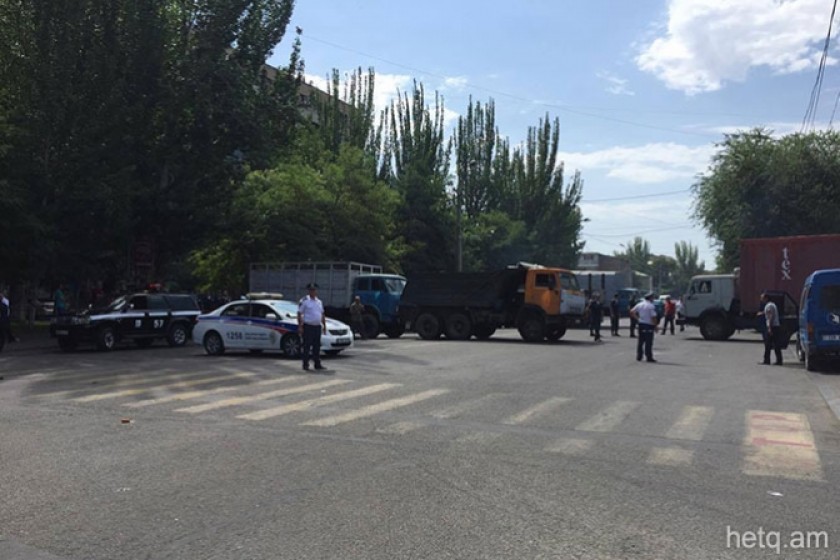 A group calling itself Sasna Dzrer (after the Armenian national epic Daredevils of Sasoun), has announced that the storming of a Yerevan police station earlier today is the start of an armed uprising in Armenia.

The group, made up of supporters and war buddies of opposition activist Jirayr Sefilyan, say that they have constantly tried to foment change in Armenia through peaceful means but that, in return, they have been politically persecuted and Sefilyan jailed on trumped up charges.

(Sefilyan was arrested on June 20 on charges of illegal arms trafficking and possession. Law enforcement claimed he and others were planning armed actions in Yerevan.)

In a Facebook video released earlier today, the group says it has taken over a police department building in the Erebouni neighborhood of Yerevan and has held it for the past three hours.

In the video, the group has demanded the release of all political prisoners, including Sefilyan.

Varuzhan Avetisyan, vice president of the Founding Parliament, an opposition political organization of which Sefilyan is a member, posted a communique (in Armenian) by the Sasna Tzrer group in which it calls for the people to rise up and join the rebellion. The group also calls for President Sargsyan to resign.

Louiza Grigoryan, apparently a resident in the area, has sent Hetq the following video taken at 5:30 this morning when shots were heard at the police station in Erebouni.

1:44 p.m. - The National Security Service (NSS) says that one police officer was killed and two injured in an early morning attack by armed men on a Yerevan police station. The NSS says that two of the hostages have been freed by Special Forces personnel.