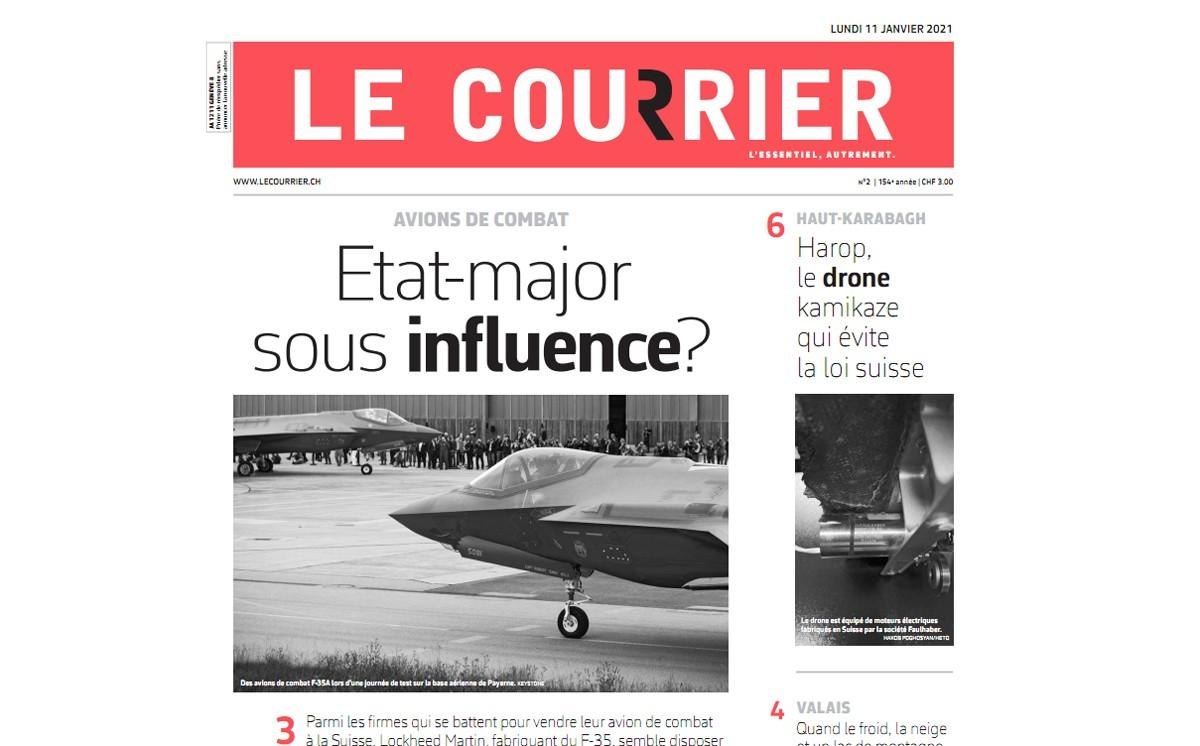 On January 10, the French language daily Le Courrier in Switzerland published an article entitled “The Israeli-Swiss Weapon of Azerbaijan”, referring to the Israeli UAVs, outfitted with Swiss electric motors, used by Azerbaijan in the recent war against Artsakh.

Le Courrier cites Hetq for discovering the fact that Israeli Harop drones (known as kamikaze, suicide drones) were outfitted with electric motors produced by the Swiss company Faulhaber Minimotor SA (a subsidiary of the German company Faulhaber) and the potentiometer made by the French company Eurofarad (a part of the Exxelia group).

This revelation has been widely discussed in Switzerland of late.

On December 3, 2020, Hetq published its findings on foreign-made drones used by Azerbaijan in an article entitled: The Killing Business: Israeli “Kamikaze” Drones Used by Azerbaijan Utilized French and Swiss Technologies.

Hetq's article was widely covered in Switzerland, a country known for its alleged neutrality.

SECO: Electric motor that operates drone’s wings was not made for that purpose

The inscription "Swiss Made", written on one of the most important sections of the suicide drones used in the war that took several thousand lives, has been widely reported in the Swiss media.

The fact that Swiss technologyis used to kill people was covered by the German-language TV and radio company SRF (see here and here) and the weekly Die Wochenzeitung (WOZ), as well as the multilingual website swissinfo.ch (see here and here).

SRF sent inquiries to the Swiss State Department of Economy (SECO) and the parent company of Faulhaber Minimotor SA, the manufacturer of the drone’s electric motor, to the German Faulhaber Group. SECO told the media that the legislation on the control of goods does not apply to such electrical devices (electric motors) and they can be exported without permission. Thus, such devices can be widely used in industry. SECO announced that the electric motor in question is not used to fly the drone, but to operate the folding mechanism of its wings.

The German group also stated that the movement of its goods around the world is regulated by international rules on export control, adding thatthese rules also apply to the transfer of its parts on the Israeli UAVs. Shortly afterwards, Faulhaber confirmed that the electric motor was manufactured in Switzerland, noting that the device was a gearbox (Faulhaber Minimotor SA was a stepper motor) that could be exported without permission. According to the German company, it produces such devices for different branches of industry and exports them all over the world. "We usually supply such components as part of electromechanical components, which in turn are installed in end systems," Faulhaber told an SRF reporter.

A SECO spokesman told Le Courrier that the electric motors found in Artsakh were not manufactured for military purposes and thus not subject to export control. The Faulhaber group did not say whether it would take steps to prevent the militarization of its technologies by third parties (in this case Israel and Azerbaijan).

No tool to prevent the illegal use of private technologies

Regarding Faulhaber's Code of Conduct according to which it respects the UN Universal Declaration of Human Rights, Le Courrier notes that there is no set of tools in Swiss law that can prevent the illegal use of local technology. According to the SECO, the export of Faulhaber micro-engines to countries to which Switzerland has imposed sanctions may be banned, or when there is reason to believe that these devices could be used in weapons of mass destruction.

WOZ weekly wrote that companies like Faulhaber Minimotor SA benefit from the sale of products not included in the lists of controlled products. According to the newspaper, the German Faulhaber group has 17 subsidiaries, 6 of which operate in Switzerland. WOZ has previously referred to three of these six (Faulhaber Precistep SA, Faulhaber Minimotor SA, and MPS Micro Precision Systems AG) that, while supplying military goods, are not considered weapons.

According to WOZ, the Swiss subsidiaries of Faulhaber received a license in 2017 to export special military goods worth some 4 million Swiss Francs (US$4.5 million). The order received by MPS Micro Precision Systems AG was particularly of note.The order included the supply of components worth more than 850,000 francs ($960,000) categorized as "bombs, torpedoes and other missiles" to Israel. The specific nature of the components isn’t known.

"The so-called correctional initiative, a vote of which will take place in 2022, provides for a ban on arms exports to countries where civil war is raging," writes Le Courrier. “But the law should not hinder the use of micromotors or other Swiss technologies since they are not considered military products.”

The newspaper quotes SECO as saying that Swiss legislation is based on international determinations. Accordingly, to control the export of the above-mentioned goods, it is necessary to make decisions at the international level, within the framework of international export control and based on the consensus of all member states. According to SECO, the Swiss parliament has the right to amend the law on oversight, but this would violate the international nature of the law.

Following the publications of Hetq and its Swiss counterparts, a group of citizens staged a protest in front of Faulhaber Precistep SA in La Chaux-de-Fonds, Switzerland. They chanted “War is not a business, fire your collaborating leaders." They stormed the company's office carrying placards denouncing Faulhaber's involvement in the war against Armenians in Artsakh and cited Hetq photos they said, "expose the death dealers."

The protesters argued that the lack of export restrictions on dual-use parts, given that they may or may not be used fort military usage, is a convenient loophole allowing Switzerland to profit from global armed conflicts.

The latter's representative told the protesters and the Le Courrier that the company did not produce the parts Hetq found in Nagorno Karabakh. Recalling the statement of the German parent group that its equipment is used, in particular, in medical, optical, aerospace equipment, Le Courrier, referring to WOZ, noted that, nevertheless, a large number of Swiss SMEs who specialize in high-precision technology make money from weapons orders that are not found in official statistics.

"What happened in Nagorno Karabakh shows the role of Switzerland in the global arms trade. The latter is an important supplier in the arms trade worth billions. Many small and medium-sized enterprises specializing in precision technology benefit from multimillion-dollar arms contracts," WOZ wrote, adding that these exports are not included in official statistics. "In any case, the public does not perceived SMEs like Faulhaber Minimotor SA as weapons manufacturers."

GB 2021-02-10 05:37:27
There will be more that will come up after the Artsakh war. I personally was shocked to hear about Pakistani military involvement. https://www.memri.org/reports/pakistans-military-involvement-nagorno-karabakh-war?fbclid=IwAR0r9Q_4tJ1bboWqthYB0SK9DNhthPiU_J0NwlROFMq_4luAxp1sPA69IoQ
patrick 2021-01-17 00:23:33
It would be easy for swiss to write on the parts: "may not be used in weapons". But as often Switzerland is involved - see WW2, see SA apartheit and Switzerland washes its image by claiming to be neutral, onest and of humanitarian spirit. It is not the case. It is money making the only value.
Bedros 2021-01-13 17:22:55
Has Armenia officially contacted Switzerland on thios matter? What is Yerevan doing diplomaticaly to condemn such business practices?