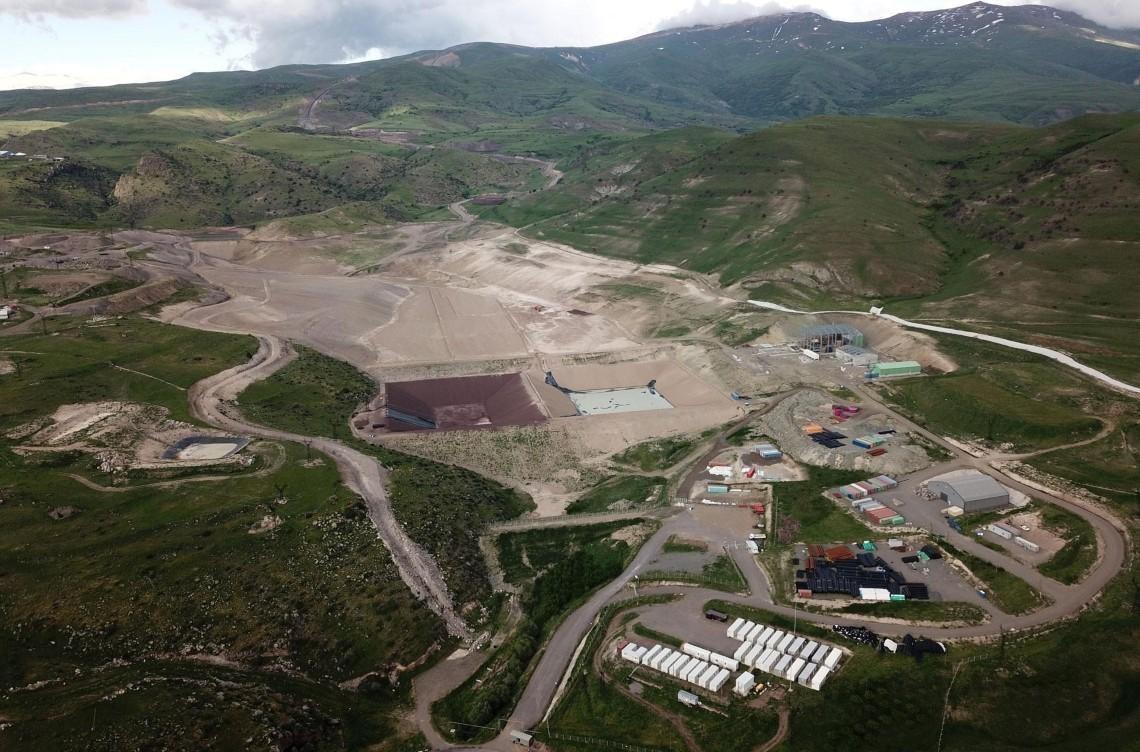 Stay Away from Amulsar: Open Letter to Big Capital Owners and Businessmen in the Armenian Diaspora

The global COVID-19 pandemic has led to a health and economic crisis all over the world, necessitating new priorities. However, many entities are on the rise with an insatiable appetite to exploit this health and economic crisis for their own gain. The old-worn economic rhetoric about boosting the primitive and unperceptive extractive industry has started circulating in Armenia We also see that Lydian's shares are being sold and bought outside the Toronto Stock market.

This pandemic is making life-sustaining economic sectors, such as agriculture, food production, health maintenance and recovery, eminent. Our struggle for Amulsar is an embodiment of all these priorities, and this is the reason why we find it important to make this call right now.

We Call on You to Stay Away from Making Any Investments in Mining in Amulsar: Armenian Environmental Front

This is not the first time that we are appealing to large capital owners and businessmen regarding mining activities that rip off the subsoils of Armenia and threaten its future.

An open letter was published in the Armenian Weekly in 2014, in which we called for refraining from participation in the planned gold mining project in proximity of the famous mineral water health resort of Jermuk, describing in detail the social, economic, and ecological hazards.

Prior to that, Lydian corporation had actively lobbied among Armenian businessmen who possessed political and economic leverage, encouraging them to purchase shares of the company in expectation of huge profits from the open-pit gold mine at Amulsar. According to reports we received, Lydian was presenting the Amulsar gold mine as a project that promised $4 billion in profits.

We have also sent letters to the investors of the Amulsar project, including large banks and hedge funds, with petitions containing over 30 thousand signatures, which is still ongoing at change.org. During a meeting in Jermuk pertaining to the Amulsar gold mine project in 2012, Apres Zohrabyan literally said: "... good advice to Geoteam (presently Lydian), if you have invested some money, don't try to invest again, this is a business with no prospects, the new generation will not allow it."

We also wrote detailed petitions to the AGBU Board about the destructive and harmful effects of mining, many of whose members were already involved in the Amulsar project.

Many of you ignored our rightful demand, bought stock for Lydian's destructive program - Canadian-Armenian, British-Armenian, American-Armenian businessmen dressed as "philanthropists". Some of the very famous Russian-Armenians even announced that mining is one of the strategic branches of the Armenian economy, providing huge loans to Lydian through Ameriabank, which they had founded. There were people of Armenian origin who played the role of a mediator in various financial and political transactions. After sufficient dealings with the corrupt government, the latter plunged into the treacherous task of permitting this business with no future prospect, ignoring numerous legislative obstacles and public resistance.

All these years, however, it has been obvious to the Armenian government, Lydian, and Armenians living abroad, that the Armenian population, especially the overwhelming majority of the people of Jermuk and Gndevaz, are opposed to the destruction of their region and endangering their future. Citizens defending their rights were eventually forced to use their own power to suspend this project, for 22 months now, by physically defending Amulsar, the water resources of Armenia, and the future generations.

Now Lydian corporation, whose entire activity was based on exaggerating reality, highly underestimating the damage of the mining project, highly overestimating the profits of the business plan, ignoring the resistance of the local community, bypassing the legislative obstacles through dealings with the government and other despicable approaches, is trying to save itself and seeking further financing. It causes great anger, that after all this, the notorious company is trying to persuade someone to buy the Amulsar project or finance the company's high costs for investment treaty arbitration (as is  confessed by Lydian's CEO Edward Sellers' affidavit to Canadian courts), expecting that the judgement of ISDS courts created largely for corporations may be against the Armenian government. In that case, the awards to be ruled by the court may by far exceed Lydian's expenses, therefore, it is being suggested that whoever ventures to finance the arbitration proceedings is expected to receive a large profit margin. Third party treaty arbitration financing against governments is yet another insidious investment derivative in itself.

We have received news that Lydian is still lobbying, especially among Canadian-Armenian businessmen, including Canadian-Armenian representatives, businessmen involved in the defense of the Armenian Cause and others. Isn't it ironical that the people talking the most about patriotism and charity are preparing to ransack the citizens of the Republic of Armenia in investment courts and by that stealthy method want to enrich their pockets? Such an attempt was made by someone probably most of you know, Van Krikorian,  the owner of Global Gold, suing the Republic of Armenia at ISDS, extorting a "settlement" that remains largely unknown to the public, despite knowing that he had dealt at the time with extremely corrupt officials.

The Amulsar gold mining project is not the only, nor the first, destructive activity involving Diaspora Armenian capital. Diaspora Armenian capital owners and businessmen have been cooperating with the corrupt governments of Armenia for at least 20 years, have been involved in large-scale and small-scale mining projects and, as mentioned above, even taken the Republic of Armenia to arbitration tribunals. We would like to mention some of their names in this letter.

Van Krikorian, Co-Chair of the Board of Trustees of the Armenian Assembly of America, with its subsidiaries of Global Gold Corporation, obtained mining permits for Tukhmanuk gold mine, Hanqavan, Marjan, Terterasar, and Lijqvaz-tey mines, of which only Tukhmanuk has operated, failed to clear his accounts with infamous corrupt minister Vardan Ayvazyan, he then engaged the state in an investment arbitration dispute about the course and outcome of which even the Government of Armenia does not have any information. He has left the people of Armenia with the burden of two open-pit gold mines and tailing pools, in addition to numerous financial dues. And yet, Serzh Sargsyan awarded him an honorary award for his "long-term patriotic activity."

Former owner of the Akhtala Ore Processing Plant, notorious Serop Der-Boghossian, who was praised for years as a great philanthropist and businessman, but, as it turned out by a criminal verdict, was using his wealth to buy out and sexually molest underage boys living in Akhtala's poverty and heavy metals.

A special place is reserved on this list for Canadian-Armenian Hrach Jabrayan, the former owner of the Kapan Enrichment Company, the director of Dundee Precious Metals Kapan Company. After the mine and the enrichment plant were purchased for a song by Canadian Dundee in the early 2000s and successfully sold to Russians for $25 million in 2016, Jabrayan now runs other companies in Armenia prospecting for oil and gas, as well as gold and other metals, while not sparing efforts to praise Lydian and inciting hatred for the Amulsar protectors. He must have some personal interests...

The other Canadian-Armenian Vahan Kololian, who is involved in the Amulsar project (was a non-executive director of Lydian International and as of 2018 was one of the 10 largest shareholders), has great experience playing on the double thread of charity and mining. He has also participated in mining projects in other regions of the world, while financing cultural and educational programs in Canada, as well as Armenia.

Maybe there is no need to say much about Ruben Vardanyan, he became world famous last year for his involvement in the Troika Laundromat operation. Vardanyan is a member of the Board of Directors of Ameriabank, which has lent a large loan to Lydian for the Amulsar project, and even Vardanyan's IDeA development models include mining.

Another prominent mine owner is Swiss-Armenian Vartan Sirmakes, who operates a gold mine in Artsakh Qashatagh Region through a company named "Gold Star". In general, there is no oversight over this mine, extracted raw material, sales, or any damage left behind. Instead, there are high-profile articles on financing of business repatriation by Sirmakesh. He is also involved in the construction and operation of hydro-electric plantsi in Artsakh.

Let us not forget Joseph Oughourlyan, whom president Armen Sargsyan is very proud of bringing to Armenia. He is the founder and director of Amber Capital LLP. Oughourlian is/was also involved in the Amulsar project as a large shareholder, as well as being one of the owners of Artsakh-HEK, the largest hydroelectric plant responsible for drying up rivers in Artsakh, which was smoothly transferred from state ownership to private business ownership.

And of course, it is worth mentioning Valeri Mejlumyan from Russia, whose group of Vallex companies is responsible for creating an environmental, social and economic crisis in Teghout. This group is also involved in the looting of the natural resources of Artsakh.

From the minor capital owners we can mention Vahakn Zirents Gayayan, who was attempting to operate a mine in Vazashen, one of the most ecologically clean and forested regions of Armenia.

While speaking about the Armenian Diaspora for years, unfortunately, these are the people who have been legitimized by the RA governing bodies and mass media outlets, it has been them that were invited to give presentations at various conferences, they were the first to be met during official visits abroad, they were given televised air time, promotional videos, praises, and medals.

And by their sides many Diaspora Armenians have remained invisible, or in many cases even insulted, who have settled in Armenia and work here every day - artisans, scientists, public figures, artists, journalists ... With a few exceptions, many Diaspora Armenians who supported the civil movements and criticized the past RA governments or the various policies implemented in Armenia have also remained invisible. But it is also through this class of the Armenian Diaspora that the Amulsar issue (among others) is being voiced in various countries and creating waves of solidarity. And for the most part, it is also thanks to them that it has been possible for  22  continuous months to at least meet the nutritional and heating needs of the Amulsar protectors.

There will not be any mining in Amulsar. This has already been decided by the local communities, and the efforts to save Lydian will ultimately fail. Therefore, we urge you, while it’s not too late, to stay far away from this project and not further soil your reputations as businessmen.

Lydian Investor 2020-06-23 20:12:31
Please who have LYDIAN (LYD) shares write below this post or send DM to me. We have a whatsapp group , as all the shareholders trying to unite and we will legally seek our right. #lydianinternational #Amulsar #Ամուլսար #Resourceinvesting #Armenia https://chat.whatsapp.com/DrChUahovZe8MoeelLXLr4
Felicity Tanous 2020-04-10 09:19:28
Support local communities' wishes. Fossil fuels must be kept in the ground to prevent climate change.