According to the NovAir company website, the airline plans to develop not only domestic flights in Armenia but also to enter the international market.

NovAir LLC, formed in 2020, belongs to the former Deputy Head of Armenia’s General Department of Civil Aviation and Honorary Consul of Austria in Armenia Aram Marutyan. The company is named after his father, Novel Marutyan.

The company received an Aircraft Operator Certificate (AOC) just days after its registration in October of last year.

Atlantis European Airways and Atlantis Armenian Airlines used to belong to the Marutyan family, but in 2018 and 2020 they were sold off.

The first of these was declared bankrupt last year and left the Armenian market. The second still operates but has no aircraft according to the Armenia’s Civil Aviation Committee (CAC).

Prior to the founding of NovAir, when Atlantis Armenian Airlines was still owned by Marutyan, the company was registered as the operator of an L-410 aircraft (Armenian registration: EK-4117) designed to operate the Yerevan-Kapan air route. However, after the sale of Atlantis Armenian Airlines and the creation of NovAir, the aircraft was transferred to the newly established company.

This Czech-made L-410UVP-E20 aircraft, which was produced in 2015 and transported to Armenia in the summer of 2018, was acquired by the Zangezur Copper and Molybdenum Combine (ZCMC), which is also the sponsor of the Kapan airport reopening project.

In 2019, we wrote that the owner of the aircraft is ZCMC-related Yerevan Global Services Group LLC, which, according to the State Revenue Committee, is engaged in providing ancillary services to the mining sector. However, according to the NovAir website, the plane is currently owned by the Zangezur Copper and Molybdenum Combine Charitable Foundation, which also owns 50% of Kapan Airport concessionaire Syunik Airport LLC. 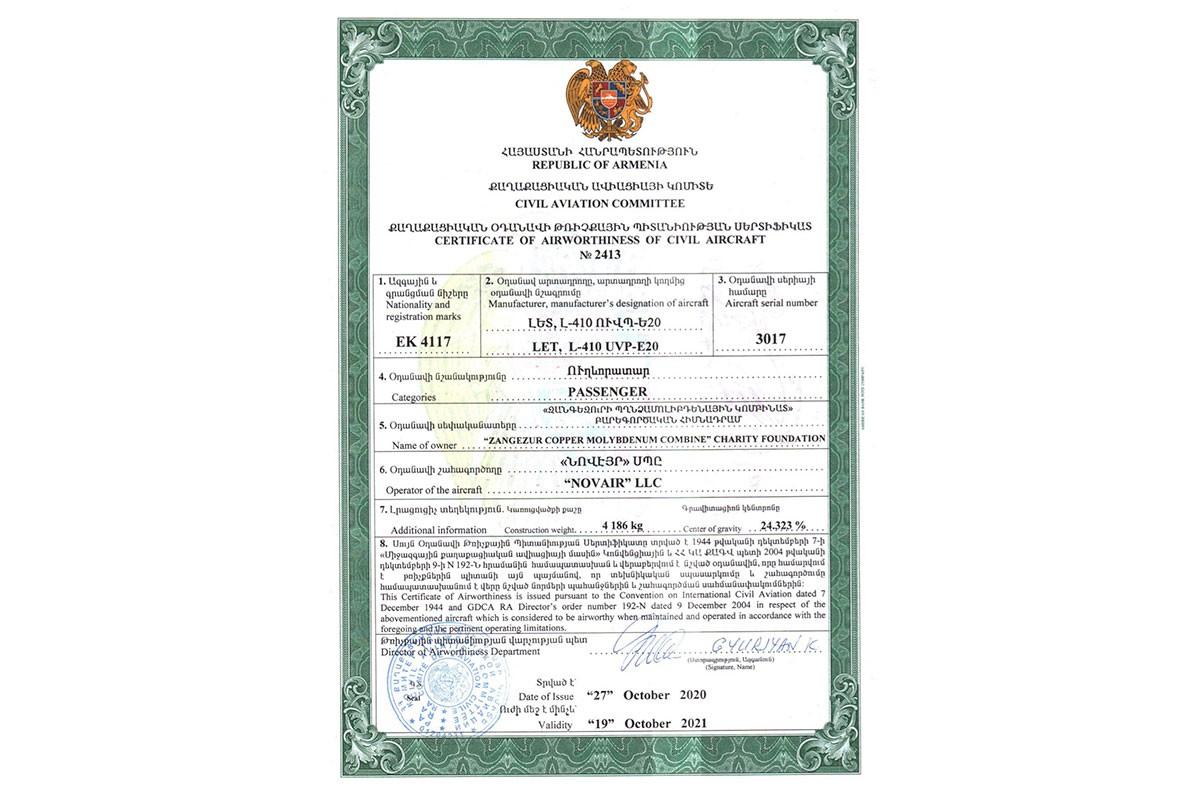 It can be said that Aram Marutyan's partners, the former team of Atlantis Armenian Airlines, are now at NovAir LLC. The similarity of the programs of these two companies speaks for itself.

In 2018, we wrote that A. Marutyan had sold Atlantis European Airways and was entering the market with another company, Atlantis Armenian Airlines, which was to continue the previous Vienna-Yerevan-Vienna flights on a codeshare basis with Austrian Airlines.

In addition, in 2018, Atlantis Armenian Airlines announced that the L-410 would fly from Yerevan not only to Kapan, but also to Tbilisi, Kutaisi and other places in the region. The airline planned to operate regular flights from Yerevan to Vienna, Prague, Athens, Kiev, Moscow, as well as charter flights to the Greek islands during the 2019 summer season. The organization of own flights by Atlantis Armenian Airlines did not become a reality (except in special cases). But now, as we learn from the NovAir website, this company has almost the same plans.

Accordingly, Marutyan’s new airline plans not only to carry out domestic Armenian flights (Yerevan-Kapan), but also to operate Airbus A320 flights from Yerevan to EU and CIS cities during the 2021 summer season. The planes must still be purchased.

Then again, flying to the EU will be a bit difficult, as Armenian airlines have been included in the European "blacklist" since last year, and Armenian planes are banned from entering the EU.

The airline has international codes: NG (IATA) and NAI (ICAO).

Time will tell what the company is planning. The fact is that neither Atlantis European Airways nor Atlantis Armenian Airlines stood out with their own passenger transportation. The former has almost always leased its A320 aircraft to foreign carriers, and the latter, with a stock of L-410 aircraft, has rarely flown. The Yerevan-Kapan air route still awaits its first passengers.