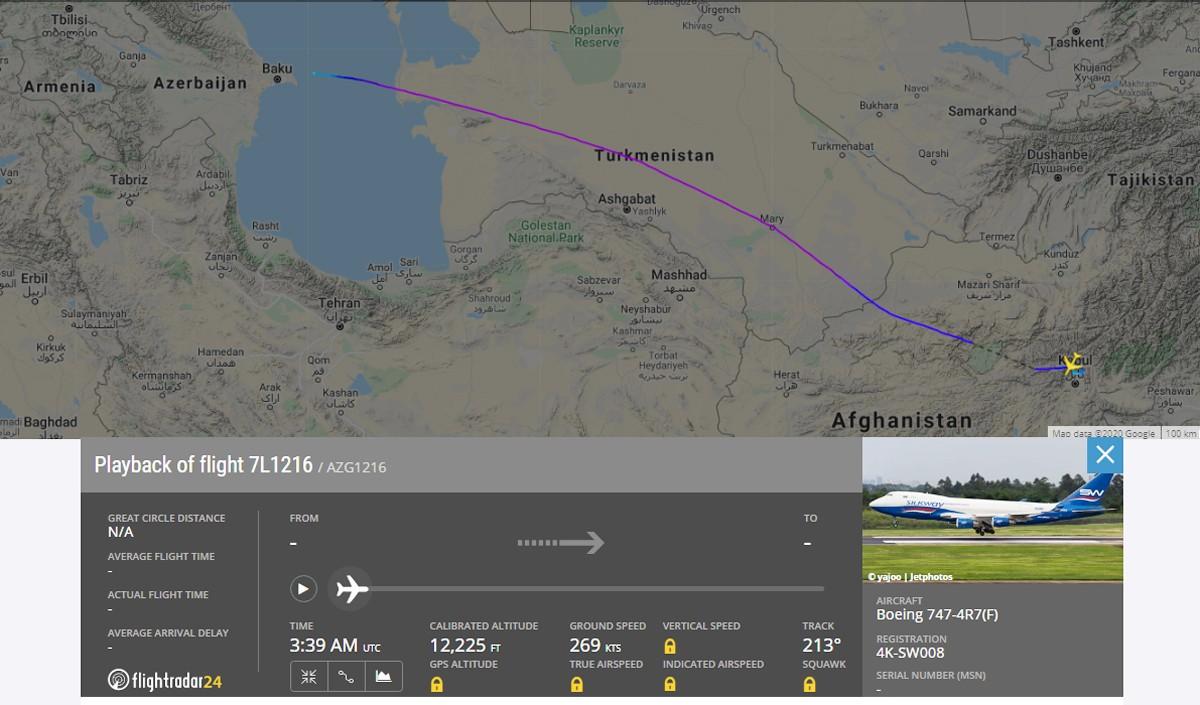 Azerbaijan Opens New "Vein" Via Afghanistan, In Addition to Turkey and Israel Routes

Azerbaijani Silk Way cargo planes have been transporting to Baku from countries such as Turkey, Israel and Afghanistan since the start of the Turkish-Azerbaijani aggression on September 27.

The fact that military-technical partners supply not only weapons to the aggressor Azerbaijan, but also terrorists, whose "delivery" is controlled by Turkey, became known in the first days of the war, a fact that was also noted by high-ranking officials of a number of countries, such as French President Emanuel Macron and Sergey Naryshkin, Head of Russia's Foreign Intelligence Service.

The Russian Kommersant newspaper, citing its military-diplomatic sources, recently wrote that the number of military transport flights from Turkey to Azerbaijan via Georgia increased sharply in September-October. The newspaper says on September 4, a C-130 transport plane of the Turkish Air Force transported people and ammunition to Azerbaijan. The same was done on September 18 by a CN-235, and on the 25th of the month by an Airbus A400.

On September 28-30, according to Kommersant, Turkish instructors who had arrived earlier in Azerbaijan were joined by Turkish Defense Minister Hulusi Akar and Land Forces Commander Ümit Dündar. Sources in the Russian newspaper reported that high-ranking Turkish servicemen were in charge of the overall military operations on the Karabakh front.

This once again proves that the Azerbaijani armed forces have come under the control of the Turks. Thus, Azerbaijani Defense Minister Zakir Hasanov is, in fact, a mere puppet for the Turks. Armenian analysts claim that the entire military-political leadership of Azerbaijan, starting with Aliyev, is in the same situation.

According to Kommersant, on September 30, October 1 and 3, a Turkish CN-235 transport plane flew from Etimesgut Air Base (military airport near Ankara) to Nasosnaya Air Base near Sumgait, transporting weapons and ammunition.

On October 7, the Turkish C-130 plane again transported crew and ammunition to Azerbaijan (flight number: TUAF737). On the 9th of this month, according to Kommersant sources, the Il-76 of the Azerbaijani Air Force transported 200 DShK machine guns from the Jordanian capital Amman to Azerbaijan (flight number: AZAF002). It should be recalled that after the October 4 sitting of the Security Council of Georgia, the government of Armenia’s northern neighbor announced that it would ban the transfer of military cargo through its airspace to the Armenian-Azerbaijani conflict zone.

The Russian newspaper noted that the Turkish side also sent applications for transit flights over Georgia on October 14, 21 and 28, all of which, according to the newspaper's sources, were upheld by the Georgians.

The website axios.com touched upon the military transportation from Israel to Azerbaijan. Article author Barack Ravid (from Tel Aviv) presented the situation in general terms. According to the Israeli writer, 60% of Azerbaijan's military purchases are Israeli products, in parallel with which a large portion of Israel's oil supply comes from Azerbaijan.

In an article published on September 30, Ravid noted that in recent days, an "air train" of cargo planes affiliated with the country's Ministry of Defense (probably referring to the Air Force and Silk Way Airlines) has departed for Israel from Azerbaijan. According to the report, the planes landed in Israel at the southern Ovda air base, which is located near the city of Eilat and previously served both civilian and military purposes. Hetq has already written several times about Azerbaijani flights to Eilat and Tel Aviv.

Azerbaijani Presidential Foreign Policy Adviser Hikmet Hajiyev said in an interview with Ravid that he could not specify the purpose of the flights but added that Azerbaijan-Israel military-technical cooperation is no secret.

Hajiyev, who was conspicuous during the war and, in general, with his false posts and statements, said that the planes might have transported fruits and vegetables. When Ravid claimed that they had landed at the air base, Hajiyev acknowledged that they could also take military goods, adding that the shipments were part of a long-term partnership with Israel and were not directly related to the war with Armenia. However, Hajiyev said that the Israeli Harop drone ("kamikaze" type) were very effective in combat.

Ravid added in the article that Israel has not made any official public statement about the war on the Karabakh front and the country's Foreign Ministry has refused to comment to the journalist. "Talkative" Hajiyev, however, told the Israeli journalist that the country's technology helps Azerbaijan ensure the security of its citizens, and congratulated the Israeli engineers.

On October 7, NKR Presidential Spokesman Vahram Poghosyan said that according to intelligence, Turkish President Recep Tayyip Erdogan had reached an agreement with the leader of the Islamic Party of Afghanistan (Hezb-e-Islam) Gulbuddin Hekmatyar to involve new terrorist groups in the war against Artsakh. Hekmatyar, who served twice as Afghanistan's prime minister in the 1990s, has been considered a terrorist by the United States since 2003. Turkey and Azerbaijan have partnered with such a person.

On October 5, Hetq wrote about the Baku-Dubai-Bagram-Dubai-Baku flight of the Azerbaijani Silk Way West Airlines. Afghanistan's Bagram air base is the main base for US troops in the country, but it is difficult to say exactly who or what was transported by civilian plane from there to Azerbaijan.

The Oct. 17 communique of Armenia’s National Security Service (NSS) was more remarkable. According to the specific data available to the NSS, the Azerbaijani side is engaged in the transportation of a large amount of ammunition and mercenaries to its territory, as evidenced by the flights of Silk Way’s Boeing 747and Il-76 planes from Baku to air bases in different countries and back. According to the NSS, the Baku-Bagram flight was registered on October 16, and the Bagram-Lashkar Gah-Baku flight on October 17 (the NSS referred to Lashkar Gah as Pakistani, but in fact it is in Afghanistan). The NSS reported that the same route was scheduled for October 18 and flights from Baku to Kandahar Afghanistan, with intermediate stop were planned. Moreover, according to the NSS, similar flights will be operated after October 19.

Thus, the Il-76 aircraft of Silk Way Airlines (registration: 4K-AZ41) has flown to Azerbaijan at least eight times from Turkey (including Ankara and Tekirdağ) since October 13.

For its part, one of the Silk Way West Airlines Boeing 747 planes, the VP-BCV (registered in Bermuda), made the Baku-Tel Aviv-Baku flight on October 14 (see photo). 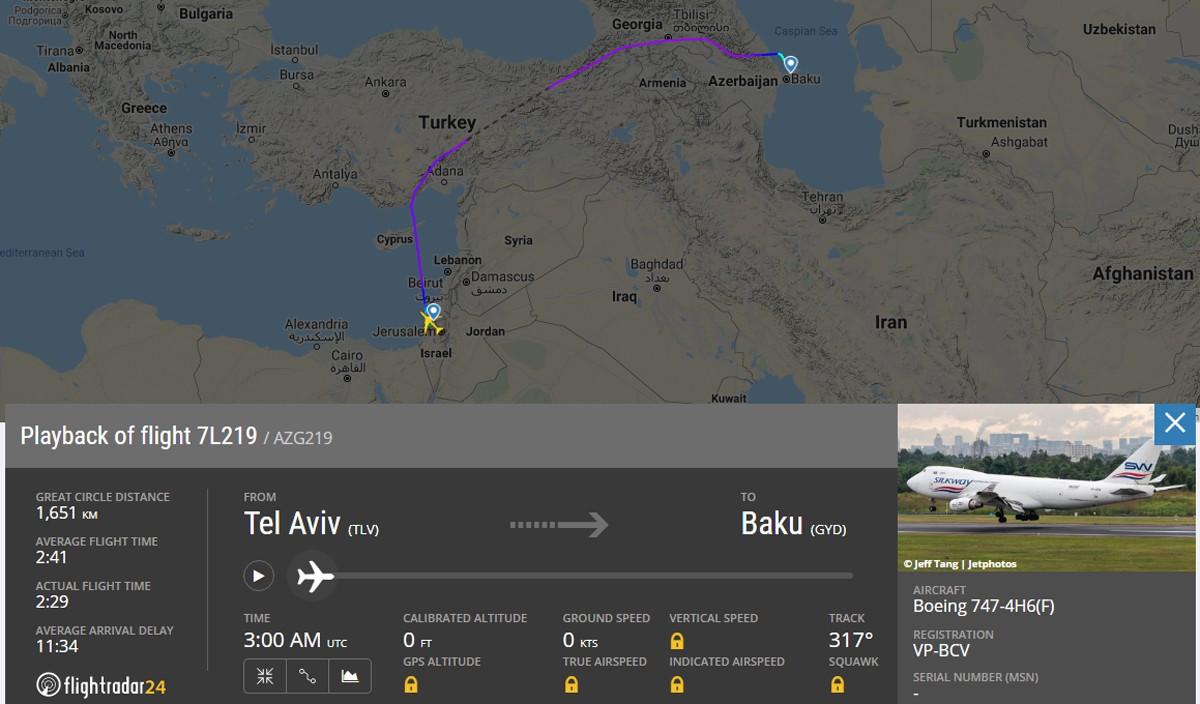 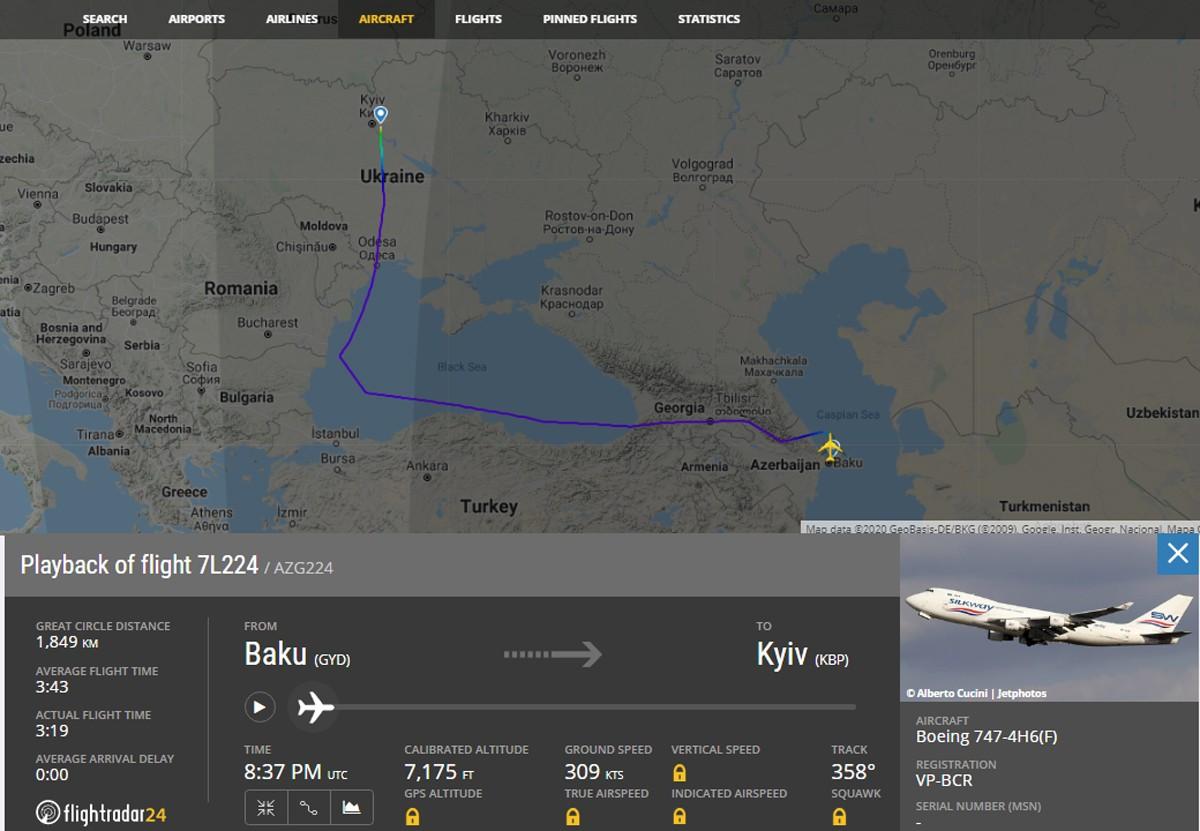 Rose 2020-10-21 10:14:06
Israel is money driven. They don't supply weapons to Turkey or Azerbaijan for love or loyalty but for oil and cash. They have no morality inspire of the Holocaust.