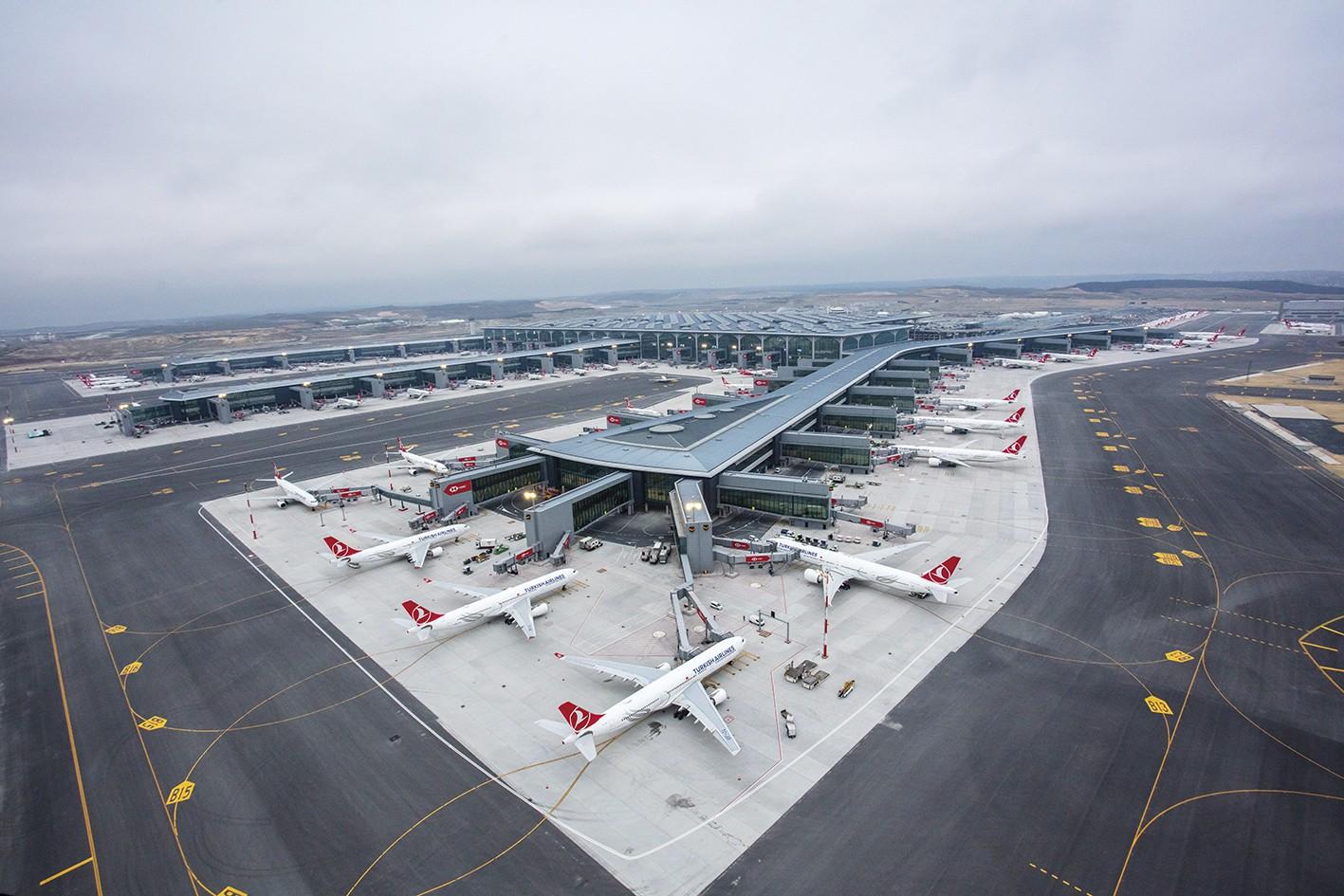 Turkish Airports: A Springboard for Transporting Mercenaries to the Artsakh Conflict Zone

In the war unleashed against Artsakh and Armenia since September 27, the mercenary-terrorists fighting for Azerbaijan, recruited by Turkey, have used Turkish airports as a springboard.

The two Syrians taken prisoner by the Artsakh forces also admitted this while interrogated by Armenian law enforcement.

Reviewing what the two said, we conclude that both, along with other mercenaries, crossed the Syrian-Turkish border in the Azaz-Kilis section. Both said they were not inspected at the Turkish Kilis checkpoint and had taken buses to the civilian airport after crossing the border.

One of the mercenaries, Yousef al-Haji, said they had traveled 2.5 hours to the airport after crossing the border. The airport of Urfa (Turkish: Şanlıurfa) is that far from Kilis, but it is possible that the Syrian mercenary did not provide accurate information.

We mention this taking into account that the closest airport to the Kilis checkpoint is in Gaziantep, which is about one hour away. In addition, foreign media reporting on the mercenaries also reported that the militants, who were transferred from Syria to Turkey, used the Gaziantep airport. However, the Russian Kommersant news outlet, citing its military-diplomatic sources, wrote in mid-October that mercenaries recruited from Turkish-controlled Syrian territories would cross the border into Şanlıurfa, from where they would be flown by hired SADAT (private military company) planes, and in cooperation with Syrian field commanders, to the conflict zone.

The two mercenaries captured by the Artsakh armed forces said that they were first transported by a Turkish plane from the first airport to a second, which was also in Turkey, where they boarded an Azerbaijani plane and left for Azerbaijan.

In fact, such a transfer scheme was designed to prevent Azerbaijani cargo or passenger planes from showing up at airports near the Turkish-Syrian border and thus not betraying the fact of transferring mercenaries. However, this does not change much, as the mercenaries themselves told various international media outlets how they got to Azerbaijan. And now we have the testimonies of the two mercenaries at the disposal of the Armenian side, which, in fact, confirm the stories that appeared earlier in the press about the Syria-Turkey-Azerbaijan coordinated shipments.

As we’ve earlier written, Azerbaijani cargo and passenger planes mainly leave for Turkey in three directions: Istanbul, Ankara and Tekirdağ. On the other hand, most of the civil flights from Gaziantep are to Istanbul, which can be seen on flightradar24.com.

For example, captured mercenary Yousef al-Haji testified that about 500 people were transported to the second airport by two civilian planes after crossing the Turkish-Syrian border and being transferred to the airport. But, of course, the transfer of mercenaries does not have to be carried out inside Turkey or to Azerbaijan by civil aircraft. A military transport plane can also be used for this. In October, referring to the Russian Kommersant article, we wrote that Turkish military transport planes C-130, CN-235 and Airbus A400M transported personnel and arms to Azerbaijan before and during the war. Naturally, such military, civilian and military flights disguised as civilian flights are carried out via the territory of Georgia.

Gaziantep-Istanbul flight: From the border to the hub airport

On the night of November 3, at around 00:15 local time (01:15 Yerevan time), a Turkish Airbus A400M military transport plane (Turkish military registration: 18-0093) flew from Gaziantep (flight number: ESEN01) to Istanbul Airport (also known as Istanbul’s New airport, code: IST). The latter is the largest hub in the region - a transport junction. We can only guess who or what exactly the military plane moved from Gaziantep to Istanbul, not far from the Turkish-Syrian border. 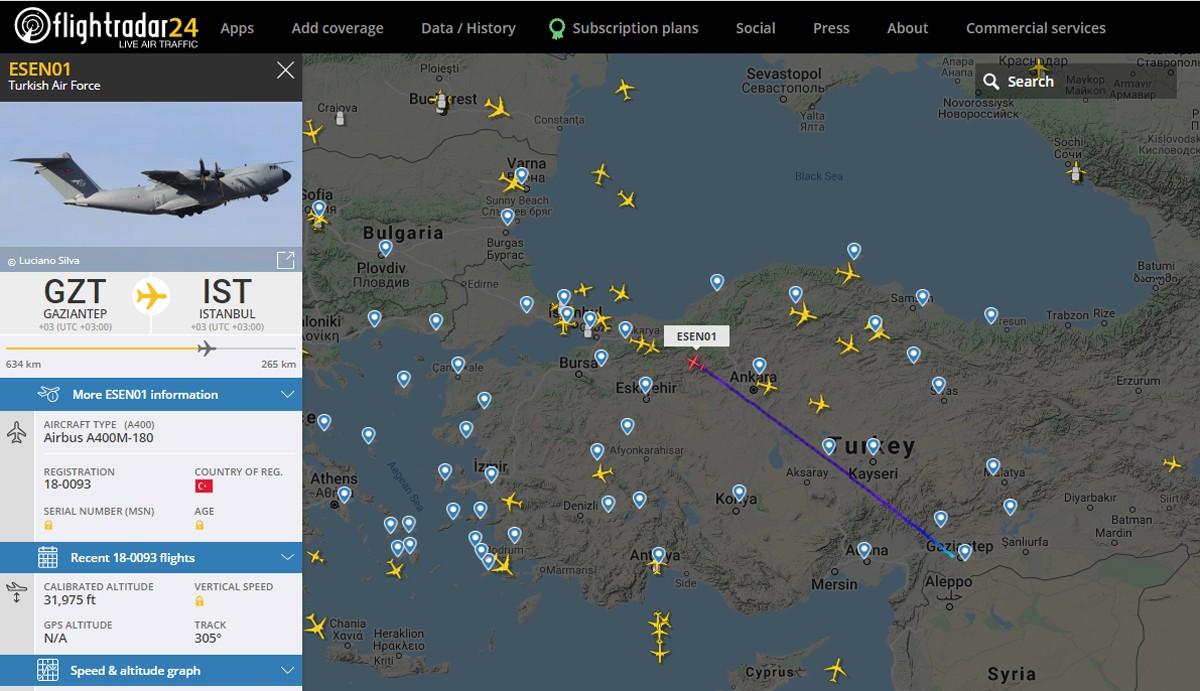 The plane landed in Istanbul at around 01:45 local time (02:45 Yerevan time). That is, the flight lasted 1.5 hours. Muhhrab al-Shkher, a Syrian captured by the Artsakh forces and flown from Turkey to Azerbaijan on the night of October 18, said that their flight from one Turkish airport to another took about an hour. Note that the Airbus A400M can carry about 120 servicemen / paratroopers. According to captured mercenary Muhhrab al-Shkher, they numbered 250, leading us to assume that he and the others were transported not by Airbus A400M, but by another plane (most likely civilian).

Returning to the Turkish military transport plane that flew from Gaziantep to Istanbul on November 3, it should be noted that it did not stay long in Istanbul and flew to Gaziantep at around 02:30 local time (03:30 Yerevan time) (flight number did not change-ESEN01), arriving at around 04:00 (Yerevan time at 5 o'clock at night). 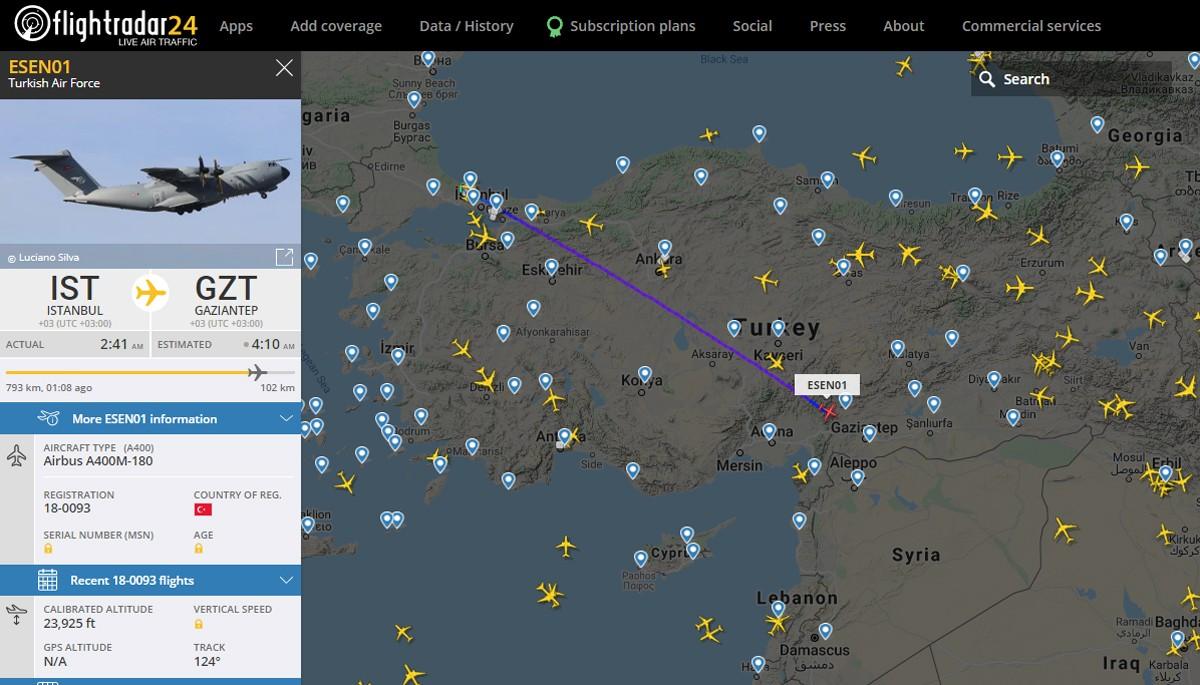 Half an hour after landing, the Turkish Air Force plane took to the skies again and flew to Kayseri (again flight number ESEN01), where it landed at 05:15. It should be noted that Kayseri Airport is used for both military and civilian needs.

As noted above, the military transport plane of the Turkish Air Force landed in Istanbul on November 3 at 01:45 local time. It is interesting that not long after, at 02:30, a Turkish Airlines Airbus A330-300 passenger plane (registration: TC-JOF) departed for Baku from the same airport in Istanbul, which arrived at 06:00 Baku time, 2.5 hours later.

Airbus A330-300 aircraft can generally accommodate 300-440 passengers, depending on the number of seats.

Turkish Airlines has two flights from Istanbul to Baku. One (number: TK338) operates at night. The other (TK332), in the morning. Overnight flights are operated by larger Airbus A330s and morning flights by Airbus A321s. In the evening, Azerbaijan Airlines (AZAL) has an Istanbul-Baku flight (J2176). AZAL uses Boeing and Airbus aircraft.

In the first days of the war, the international press wrote that Turkey was transporting mercenaries not only from Syria to the Artsakh front, but also some mercenaries who had been transported to Libya from Syria.

Against this background, flights from Libya to Turkey attracted greater attention, although we’d written that on the night of September 30, a Buraq Air aircraft arrived in Baku on a direct flight from the Libyan capital Tripoli. Moreover, this Libyan operator does not have flights to Azerbaijan in its flight plan. It is not difficult to understand the purpose of the Libyan passenger plane flying to Baku in the early days of the war.

Here are the Libyan airlines that have flights to Turkey.

Tripoli-based Afriqiyah Airways operates Tripoli-Istanbul (flight number: 8U974) and Misrata-Istanbul (8U970) flights. Both Tripoli and Misrata are controlled by the Turkish-backed Libyan National Accord government, which rules in the west of the warring country. However, according to flightradar24.com, flights from Misrata are still operated from Tripoli. In the case of both flights, the landing in Istanbul is scheduled for noon, but they’re usually late.

This company is also based in Tripoli, from where it operates flights to Istanbul. Flight YL100 is at night, YL102 in the morning (planes land in Istanbul in the afternoon), and YL300 in the afternoon.

The arrival of the YL100 flight to Istanbul according to the schedule almost coincides with the departure of Turkish Airlines' Istanbul-Baku flight TK338. In fact, the latter takes place 20-30 minutes after the arrival of the Libyan plane. Thus, we see a convenient combination of flights. We do not take into account the time of receipt of luggage after the incoming flight, the time of registration of passengers on departure since, in the case of mercenaries, the transfer is carried out differently. According to captured mercenary Muhhrab al-Shkher, at the second airport in Turkey, they were greeted by more than fifty Turkish soldiers standing in the middle of the two planes. The mercenaries walked through the middle, from the Turkish plane to the Azerbaijani plane, without entering the Turkish airport’s arrival gate.

According to flightradar24.com, this Tripoli-based airline has flights to Istanbul from Tripoli and Misrata, but in fact we only see Tripoli-Istanbul flights (number: UZ115). According to the flight plan, the landing in Turkey is scheduled for early in the morning, but in fact the landings of Buraq Air in Istanbul took place around 21:00.

Libyan flag carrier Libyan Airlines, also based in Tripoli, operates flights from there to Istanbul (LN192). Landings at the airport are scheduled for 2 p.m.

Naturally, in addition to the above-mentioned flights, mercenaries can be transported to Turkey by non-scheduled (charter) flights, and cargo / military transport planes can also be used.

simon 2020-11-07 02:57:30
even georgia "helps" the satanics by let them flying over it's territory for bringing mercenaries and wappons -- shame on you, georgia ! you'll be cursed and punished by GOD , like TR (earthquake , 114 dead ) , D.Trump by loosing elections and putin by getting the deasese og prkinson BECAUSE ALL THESE DIDN'T HELP KARABAKH-ARMENIANS !!!